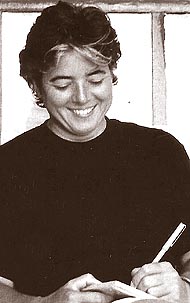 Kim Rose Korkan, 62, passed away at home on Tuesday, July 9, surrounded by loved ones. For the past 12 years, she had been dealing with an aggressive form of Parkinson’s Disease, to which she eventually succumbed.

Born on March 17, 1957, to Patricia Ann (Messina) and Kenneth Duns Korkan, Kim spent the first 12 years of her life in Santa Monica, Calif. In 1969, the family moved to Beavercreek, where Kim graduated from Beavercreek High School and went on to spend one year at Wright State University. It was during this time that Kim first connected with the art of writing and began her lifelong practice of journaling. In 1977, she moved to Yellow Springs and started working at The Winds Cafe as a dishwasher. It was this inauspicious beginning that led to one of her greatest accomplishments, the lifetime pursuit that came to define her both professionally and personally.

At The Winds, she very quickly exhibited a curiosity about food preparation and applied herself to learning to cook with Iko Wright. She eventually worked her way up to head chef and co-owner of The Winds with business partner Mary Kay Smith. Over a period of 35 years, combining a passion for food and wine pairing, they were instrumental in changing the trend of cooking and food preparation in Southwest Ohio. From the early 1980s, they enthusiastically partnered with local organic farmers, helping to foster an area-wide appreciation for the farm-to-table movement and support for local foods. In this same vein, they began a tradition of generous commitment to local causes, preparing dinners for benefit events for organizations such as Planned Parenthood and Tecumseh Land Trust. Kim would often take a sabbatical from The Winds to increase her knowledge of technique or to follow particular passions. She studied at and received certificates from the Culinary Institute of America and the California Sushi Institute. In addition, she was awarded a scholarship by Women Chefs and Restaurateurs to work with organic farmers. During Kim’s tenure at the Winds, she mentored many aspiring chefs and frequently taught cooking classes at Dorothy Lane Market. Her love of cooking inspired many to continue in culinary pursuits as professional chefs or as confident home cooks. An avid reader, Kim spent countless hours reading cookbooks, recipes and restaurant reviews until the end of her life, always looking for ways to hone her craft. This practice was so strong and reflexive, that she continued it long after she was no longer able to eat. Just the idea of cooking and eating was enough to bring her joy.

One of Kim’s great pleasures was to throw dinner parties. Whether it was planning a formal menu or just combining whatever was on hand for a casual gathering with friends, Kim excelled at hosting and making people feel comfortable and relaxed. Her spontaneous nature was contagious: friends often joked about her “robbing the cradle” by opening a bottle of wine before it had time to mature. And while it may not have reached its true potential, who among us right there with her wasn’t drinking the wine and enjoying living in the moment? Her motto and the way she lived her life was, “I may not be here tomorrow, and if there’s something I want to do, I’m going to do it now.” Kim lived life to the fullest.

Aside from cooking, Kim pursued many varied interests. She was an amateur photographer and always had her camera with her, ready to document everything from milestone moments of friends and family to the light and shadow on a bowl of fruit. One of her favorite projects involved her daughter, Maeve; nephews, Eamon and Rory; and other family friends. Kim was always on the lookout for discarded sofas on the side of the road, and whenever she found one she would round up the kids in her jeep and pose them lounging on it, “smoking” candy cigarettes. This “Sofa Series” project lasted over a dozen years.

Kim had a great love of nature that was manifested in the pursuit of birdwatching; she participated in the Glen Helen annual bird count many times. A young family friend affectionately nicknamed her “Bird Nerd,” a name that stuck with her forever. Family and personal vacations often revolved around trips to wildlife refuges and national seashores, and over a period of 30 years she accumulated an impressive life list of birds. Her fascination with rocks, fossils and arrowheads is legendary and the fields surrounding Yellow Springs beckoned her to explore. On these excursions, a couple of like-minded souls who shared the same “rock fever” guided Kim and shared in her delight, and brought her safely home. Kim also loved hiking and biking, and could often be seen riding her bike in and around town. In the summer of 1988, with her partner Pegeen, she made a cross country bicycle trip of 2,200 miles from Berea, Ky., to Portland, Ore., which was the source of many memories and great stories through the years.

In 2010, Kim found a previously hidden talent in drawing and watercolor painting. More often than not, the subjects of these paintings were musical instruments or the beloved pets of friends, which she would then gift to the owners. The artwork was minimalist and elegant and reflected her personality. She had a knack for always choosing the “perfect” gift for someone. Sometimes it was just the thing you were longing for. Sometimes, you didn’t even know you wanted or needed it until Kim gave it to you. But it was always just right.

Music featured large in Kim’s life: Whether it was Madonna, Dwight Yoakam, Etta James, Lucinda Williams or Jethro Tull blasting from the boom box during a busy night working the line or Billie Holiday, Death Cab for Cutie or Chet Baker at home, there was always some new artist or cherished old band in the background. In the 1990s, she developed an interest in jazz that she nurtured with hours spent reading about and listening to different jazz artists, eventually amassing a large collection of CDs and records.

Kim’s love of writing and of poetry inspired her to write many of her own poems over the years. She loved to enter contests and join live poetry readings, was always buying poetry books for herself or gifting them to others. To her, life was poetry, and poetry was life. This was the artistic pursuit that most defined her.

For the last 12 years of her life, Kim was severely challenged by her Parkinson’s Disease and related ailments, and she dealt with what she referred to as a “rude interruption in our life” with grace and courage. She is remembered for her incredible generosity, kindness, thoughtfulness, sharp wit and zest for life, and has earned the love, respect and admiration of all who knew her. Through these difficult years, she has had the good fortune to enjoy help and companionship from many caregivers and friends, especially Amie Johnson, Tracy Moran, Jennifer Ahrens, Dan Duffee, Rose Wright, Donna Haller, Lynn Adams, Chris Glaser and Michele Burns.

There will be a memorial service on Oct. 5 at Glen Helen. In lieu of flowers, a donation to Glen Helen Ecology Institute or Glen Helen Outdoor Education Center is suggested.