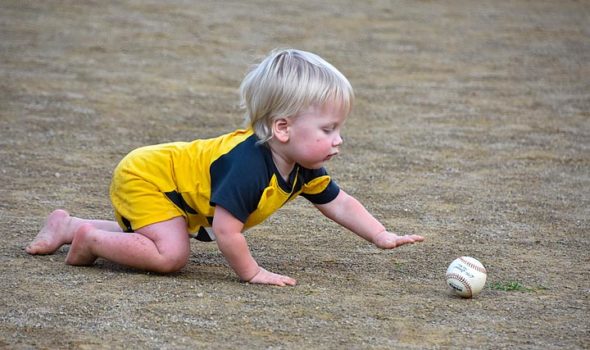 At a Perry League T-ball game earlier this month, one-year-old Ronan Triplett crawled down for a ball. (Photo by luciana Lieff )

When Henry Campbell, 6, comes to the plate, he looks serious, like a man sent in to do a job only a professional like him can do.

“This is Henry,” says Margi Gay, my sidekick and fabulous on-deck coach.

“Hello, Henry,” I say, and then something I don’t remember ever happening before happened: “Henry!” a boy shouts from the infield. “Henry! Henry! Henry!” two girls and a second boy call out. There is a joyful possessiveness in their calls that seems to say, “This is our friend from the outside” — outside the world of T-ball. Henry is calm, unfazed. Did he even hear these joyful calls from the field?

Clay Husk, 6, is back, becoming quite accomplished as a “he’s-been-here-every-night-of-the-2019-T-ball-season” veteran. A good-looking boy committed to this league, he apologizes for not wearing his bright, rainbow-colored 2019 Perry League T-shirt. We think it is fine, especially when he comes — or he and his parents come — with his baby brother, Ash, who is 18 months old. His mom Sarah brings Ash to the plate and I am again awe-struck by how much actual batting and running these tiny human beings can accomplish.

Amelia Linse, 6, is back, too — I missed her the last two weeks. She and her partners in crime, Amandine Bouquet Sabre, 5, Reese Tobias, 4, and Nora Carr, 6, are catching and counting how many balls they’ve scooped up once again. It is 140 balls, just 30 minutes into our 90-minute evening of play.

There are emotional moments of transcendence for me at the beginning of the evening, when a couple of the children rush at me, determined to give me a hug — Topher Besson, 3, slams lovingly into me as we line up to run out to right field to do our warm-up exercises. It’s an honestly remarkable and humbling experience to see and feel and receive and benefit from the perfect, unsolicited love of a small child. I am deeply touched. Julia Camard, 5, rushes exuberantly, excitedly, lovingly, at me, too, and slams into my leg, her arms spread for a hug. I am stunned for a second — it is too good to be true, too inspiring, too perfectly healing, too totally nurturing to quite believe. I put my hand on Julia’s back, on Topher’s back, a little reciprocation, a little hugging of my own, a physical acceptance and acknowledgement of this wondrous thing — in a second, maybe two, each child bounces away to spread that love and joy some other place.

Luke Miller, 5, our talented left-handed player, is accompanied on the diamond by his brother Tanner, 8, and Tanner’s Little League friend Henry Babb, 8. After hitting a couple of times, Luke joined Tanner and Henry in the throwing out of balls to kids in the field — a batter hits the ball off the tee, and then a gang of kids along the first base line, the gang usually led by Mark Breza, 6-year-old Zander’s dad, throw a dozen more balls out — in hopes of getting a ball to every kid. Which every kid really yearns for. We do love our bats and balls.

Grayson Smock, 6, tells us his new name when he comes to the plate. “It’s King Cobra Slithering Snake,” Margi Gay, our on-deck coach, says when she introduces him to me. When Grayson hits the ball, l trot down to first base behind him. I was going to tell Layla Nelson Besson, our phenomenally loving first base coach, what Grayson’s new name was, but as I arrived a couple steps behind Grayson, I saw and heard he was already explaining to Layla who he was: “Cobra Snake?” she asked.

Erin Fink, 8, is laughingly taking pictures of her mom Pam Fink, as Pam tries to get 2-year-old Sarah to stand at the plate. Sarah was more compliant this week than she had been last week, when she was not compliant at all, but it was still a formidable task to get Sarah to even resemble a T-ball player — but comply Sarah finally did, and the Fink trio trotted off to first base, Erin still laughing and clicking pictures.

Amelia Linse says she just did a “back” something. I didn’t get what she said exactly. “Wanna see?” she asked. “Yes,” I say, and she races into the grasses of right field and does a flying cartwheel, and then immediately, I am not sure how, she does a standing backflip. Awesome.

Oliver Johnson-Fairlie, 2, comes to the plate with his mom, Jenny. “We call him Oly,” she says (Oly rhyming with holly). Then Jenny spends what must have felt like an eternity to her, trying to get Oly to hit the ball “He’s only 2,” she says, worrying, I think, about how long it is taking to get him to hit a ball. I tell her, “You can take all night. He is why we’re here. It is why we say you get a thousand strikes in T-ball, because a lot of our players need a thousand strikes.” Jenny is grateful and tells Oly, “Hit the ball, hit the ball.” And being the literal-minded 2-year-old that he is, he hits the ball, only he uses the bat like a hammer and acts like that ball is a nail. Which he hits, Bam! Bam! No! No! Jenny is wonderfully patient, and she and Oly manage to hit the ball off the tee for Oly’s first base hit.

There’s Thea Brevit, 3 — “It is pronounced Tay-uh,” her dad Yunus tells us. “It’s Norwegian.” Margi Gay shows Thea how to hold a bat and how to swing. And then this lovely, dark-haired Norwegian beauty gets a hit on her third swing.

Laurelai Myers, 3, is sitting in the dust, making piles of dirt with Clay Husk. Violet Ficke, 4, is working in the dirt and lime-white line along the third baseline. They ignore all balls coming their way — unless one rolls right into their laps. Julia Camard is sitting near second base, hoarding four or five balls she’s buried in the pile of dust and dirt she’s gathered between her legs. Louise Camard, 7, is helping me with the batters — “The tee’s too low!” she tells me. “Drop the bat and run!” she says to the batter who has just hit the ball. And Rebecca Reed, a 20-plus-year champion T-ball volunteer and organizer, makes sure Elijah Schaftnik, 3, and Aspen Reitsma, 4, get their last at-bats before we call it a night.

Annastasi Mayer, 3½, gets her sixth hit. Her dad, Brian, a musician, music teacher and instrument maker — he’s head of the McKinney/Yellow Springs High School Music department — was a T-ball player himself some 20-odd years ago. He’s an impressive music man and wonderful fellow, but I am partial to his early involvement with me in our T-ball program.

And that’s our wonderful, mixed-up, and variously peopled Perry League, Yellow Springs’ T-ball program for all kids 2–9 years of age, regardless of their race, color, creed, sexual orientation, ethnicity, spiritual inclination or practice, ability or disability — or their propensity to love their coaches, love each other, love the dirt and love all those wonderful bats and balls. Kids can begin play at any time, and there is no requirement to play every week. We’ll be out there at Gaunt Park from 6:30 to 8 p.m. for the next four Friday nights, and we’d love to have you. We really would.