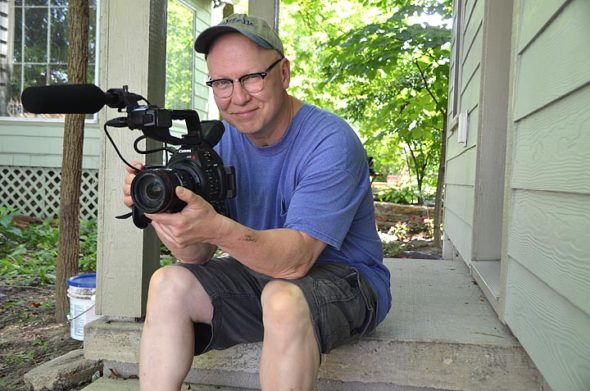 Documentary filmmaker Steve Bognar was recently invited into the Academy of Motion Picture Arts and Sciences. Pictured here on the steps of the studio he shares with his filmmaking and life partner Julia Reichert, Bognar has been making documentary films, including this summer’s “American Factory,” for 35 years. (Photo by Audrey Hackett)

Steve Bognar receives a ‘Welcome to the Academy’

The news came by email. Subject line: “Welcome to the Academy.”

For a moment villager Steve Bognar was stumped. “The Academy? The Taekwondo Academy in Fairborn?” he joked in an interview at his Yellow Springs home this week.

But the email was from the Academy of Motion Picture Arts and Sciences, with an invitation to join the movie industry’s leading honorary professional organization. As in, the folks who award the Oscars.

New members of the Academy are sponsored by two existing members; there’s no application process, and those nominated for membership aren’t aware that their names are being considered. Until the news comes.

“So many of the people I admire are in the Academy. It’s mind-boggling,” he said.

A documentary filmmaker, Bognar will join the documentary branch of the Academy, one of 17 branches of the 8,000-plus-member worldwide organization. He is among 842 individuals from 59 countries invited to join the Academy this year. New invitees include Lady Gaga, Letitia Wright, Sterling K. Brown, Tom Holland, Annie Lennox and Adele, as well as director Jon Chu and filmmaking duo Phil Lord and Chris Miller, creators of the latest Spiderman film.

Membership is an honor, but with the honor comes work.

That means watching up to 200 new documentaries a year.

“It’s a real responsibility,” Bognar said. He currently watches about half that number of films each year, “so I’m going to ramp it up.”

Bognar has some sense of what he’s in for. His filmmaking and life partner, Julia Reichert, was named to the Academy in 2010. The couple has collaborated on numerous award-winning films, including the 2010 Oscar-nominated short documentary “The Last Truck: The Closing of a GM Plant,” about blue-collar workers in Moraine, Ohio, and this year’s “American Factory,” about Chinese and American workers learning to work together at a Chinese-owned automotive glass factory located at the former GM site. “American Factory” garnered the couple the top U.S. documentary directing award at the 2019 Sundance Film Festival. The film was bought by Netflix and Higher Ground Productions, the new production company of Barack and Michelle Obama, and is set to be released Aug. 21.

Bognar, 56, has been making movies for 35 years. Forty years, if you count his earliest experiments with a Super 8mm camera he found in his parents’ closet as a teenager. By that measure, his first film was “Night of the Living Innertubes,” a self-described “really silly movie.”

The filmmaker grew up in Beavercreek and attended Wright State University, where a photography teacher encouraged him to go out into the world and interact with people to take photos.

“It was exciting and scary in a really good way,” he said.

“It was beautiful and poetic,” he said. “I realized you could make art and tell real-life stories.”

His first documentary project was about his father, a Hungarian immigrant. It took him 10 years to finish.

“I leaned how to tell a story, how to trust the process and keep working the material,” he said.

He had meanwhile met Reichert, and while the couple were supporters of each other’s work, they resolved early on “never to co-direct,” he recalled. But they reversed themselves with their 2006 film “A Lion in the House,” about children fighting cancer. When they began the film, in 1997, Reichert’s daughter was battling cancer, so the project had a deeply personal resonance.

Filmed largely at the Cincinnati Children’s Hospital, the project was “so hard and so intense that we just organically realized we were co-directing,” Bognar said.

He and Reichert have made films separately as well as together since that time. They work out of their Yellow Springs home, which includes a studio at the back of their property constructed a few years ago. Last year, during the editing phase of “American Factory,” a team of nine worked in that space, including editor Lindsay Utz, who moved to the village from Chicago in a race to finish the film before the Sundance submission deadline.

While many of their peers live in New York, Los Angeles or San Francisco, Bognar said he and Reichert are happy to reside in Yellow Springs, where they moved in 1991. Bognar’s mother, Andrée Bognar, also lives in the village.

“This is an incredibly supportive community,” Bognar reflected. “Our work has benefited from being here. People have sat in our living room viewing long, crude, bad rough cuts of films.”

The Little Art has also test-screened the couple’s work, he added. And other filmmakers in the village, including Jim Klein and Anne Bohlen, have been cherished collaborators and colleagues.

Reichert is an Antioch graduate, and Bognar formerly taught at Antioch and Wright State. He characterized the stories the couple is interested in telling as having “an Antioch spirit.”

“There’s a spirit of adventurousness in our work. And we’re trying to tell stories that matter,” he said.

People striving in the face of high odds and those who have to “dig for courage or grace” are among the subjects that compel him, he said. Amplifying the voices of working people and others not often heard in film has also become an important aspect of his work.

“The ethics of representing someone whose world and background is different from yours is something I think about all the time,” he said.

“I so admire the depth and richness of the storytelling in ‘Eyes on the Prize,’” Hampton’s landmark 1987 series on the Civil Rights movement, Bognar said.

Now, as one of the newest members of the Academy, Bognar will be looking for new heroes, and new films to love. Next month, he’ll get his first batch of new documentaries to view and evaluate. He’ll sit down with his legal pad, press play and get to work.