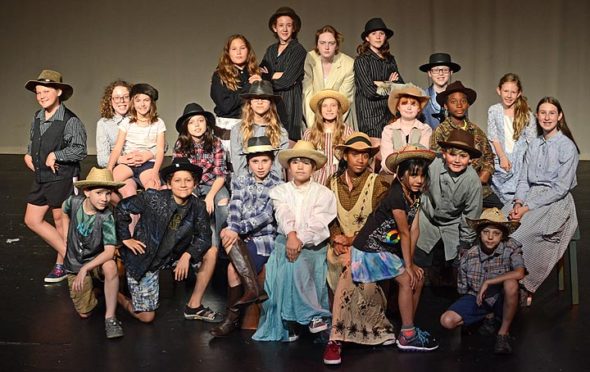 The Yellow Springs Kids Playhouse will perform “Bonanza Valley!” at the Antioch College Foundry Theater. Show dates are set for July 10, 11 and 13 at 7:30 p.m. and July 14 at 3 p.m. This production marks the 25th anniversary for YSKP. (Submitted Photo)

YSKP brings back the old West

“Bonanza Valley!” is anything but the typical “cowboys and Indians” narrative. Instead, the play retells the story of the Western frontier in a way that explores and challenges “Old West” traditions of property, power and gender.

With this year marking the 25th anniversary season for the Kids Playhouse, founder and director John Fleming wanted to produce something special. So, he opted to revisit the Playhouse’s 1998 production of “Bonanza Valley!”.

“I’ve loved every show YSKP has done, but I chose ‘Bonanza Valley!’ because it was one of the most beloved, the most popular productions we’ve done,” said Fleming. “It just seemed like a fabulous show to do for our 25th anniversary.”

Fleming’s charge of “Bonanza Valley!” comes after several years of organizational change at YSKP. In 2014, after 20 years, Fleming retired from his position as executive director, handing the reigns over to Ara Beal, who had a long association with the organization. After Beal left to take another job in 2018, the summer production went on hiatus for a year. The YSKP Board asked Fleming to return to direct the 2019 anniversary show. He immediately said yes, and set to work to revive and rework the cherished “Bonanza Valley!”.

“The community should know that the Yellow Springs Kids Playhouse is back,”  said Fleming.

The making of “Bonanza Valley!”

The revival script was developed in collaboration with local playwright Louise Smith, who also wrote the original 1998 script. The play is now a multimedia production, including video, still photography and more stage effects. According to Fleming, this new iteration of “Bonanza Valley!” strives for a greater sense of authenticity than the original production.

“The story of the Western frontier is a big part of our myth as a country, and I’ve seen a big push to retell that story in a more authentic way — a way in which history isn’t whitewashed,” said Fleming. “We’ve reconfigured how the native and indigenous narratives occur within the story, and we did it in a really wonderful, visually spectacular way.”

The updated “Bonanza Valley!” also tips a hat to the late Suzanne Clauser, a former village resident and award-winning television scriptwriter. Clauser wrote a number of episodes for the original television series “Bonanza” throughout the late ’60s and early ’70s.

Fleming described Clauser as a protofeminist who introduced strong female characters in “Bonanza” and, from her work on the show, became a kind of pioneer in researching and representing women in the wild west in film and television. 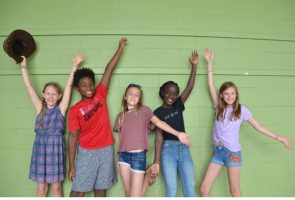 To pay homage to Clauser, the new script of “Bonanza Valley!” includes a character named “the Writer,” whose lines, according to Fleming, reference actual quotes from an interview Clauser had with the Yellow Springs News when she was alive.

Not everything in the script needed changing, though. The megalomaniacal land-developer named “Trumpmall” is still the diabolical antagonist of the play. In the 1998 script, Trumpmall even had designs to become president one day.

“It was a strange twist of fate that we didn’t have to change many of his lines,” said Fleming. “Sometimes life imitates art.”

The cast of “Bonanza Valley!” is comprised of an eclectic group of 29 local kids — all of whom, Fleming remarked, are dedicated to getting better with each rehearsal.

“So many of them will keep performing or go on to bigger and better things,” he said. “When I look at the cast list for the original 1998 production, I see a remarkable group of kids who have gone on to become successful adults and professionals in a variety of fields.”

For instance, in the original cast were Michael Malarkey, the now-television actor who has appeared in the series “The Vampire Diaries,” and Martin Bakari, the nationally acclaimed vocalist.

Fleming said he sees YSKP as being a productive force in children’s lives — one which teaches life skills and builds confidence.

“We foster abilities like articulation, oration and expression,” he said. “We teach children how to express ideas through action, through words and through drama. But above all, we help children to show grace under pressure. Theater is just like life: if you made a mistake, you have to keep going, you have to keep performing and playing your part.”

As for the kids, they seem simply grateful for the opportunities that YSKP affords them to perform and socialize with one another outside of school.

Zazu Metcalf, 11, plays one of the television crew members in “Bonanza Valley!”. She said that her favorite part of YSKP is “just that it actually exists.” Metcalf went on to say that she enjoys the creative outlet that YSKP provides her and her friends.

“I’ve been a singer my whole life, but YSKP has allowed me to become more of an actor,” she said. “My character is a lot of fun because I get to boss everyone around, and in real life, I’m not really a bossy person.”

James White, 12, plays the patriarch of the Hartright family in “Bonanza Valley!”

“It’s kind of weird to play the role of a father figure when I’m still pretty young,” laughed White. “But I get my inspiration from my grandpa because he’s one of those people who comes into a room and starts demanding things, and he usually gets what he wants. My character is the same way, but he doesn’t get what he wants.”

Fleming had nothing but praise for the cast and the ways in which they’ve taken on their particular roles.

“My style of direction is to feature over-the-top animation and stylized behavior on stage, and I think this cast really hits on that,” he said. “They seem to visually embody their characters. As always, we want to create a quality artistic experience for both the actors and the audience.”

As for the future of the Yellow Springs Kids Playhouse, Fleming said that it’s evolving in some pretty dramatic ways, including moving forward with a new program, the Traveling Tabletop Theater, which is a mobile performance space focused on puppetry and marionettes.

For more information on the Yellow Springs Kids Playhouse, “Bonanza Valley!” or the future puppet-oriented plans of the theater company visit http://www.yskp.com.