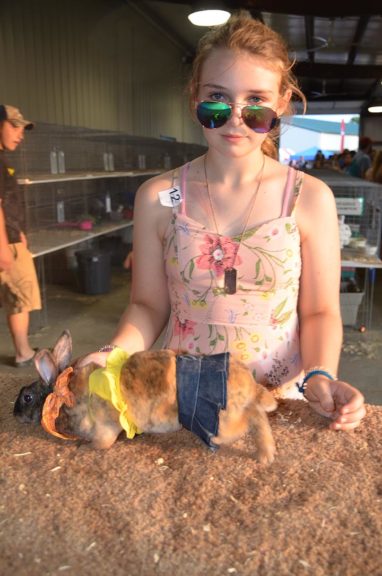 The 4-H-sponsored rabbit costume contest — in which youngsters and their pet rabbits dress in tandem, themed costumes — was held on Wednesday night last week during the Greene County Fair. Above, 11-year-old Mackenna Spur, of Caesarscreek Township, and her rabbit, Pumpkin, were “on vacation.” (Photo by Lauren “Charles” Shows)

At 8 a.m. on Sunday morning at the fairgrounds, there were no crowds, food booths were closed and the rides were dark and still. In the livestock buildings, however, the 180th Greene County Fair was in full swing, as young folks from around the county bustled through the hay-filled stalls and arenas, preparing for the competitions they’d undertake throughout the week.

The fair boasts tens of thousands of attendees every year — last year’s attendance was over 50,000 — with many showing up to sample the popular food, games and rides on offer. Often less well-known are the various 4-H and FFA-sponsored events and competitions, such as egg tosses, fashion shows and harness races. There’s even a rabbit costume contest.

Early in the week, 13-year-old YS resident Hannah Hall and her dog, Cookie, showed off their talents in the 4-H dog show. Cookie won first place in the obedience category as well as the rally category, in which Hall led Cookie through a course and signaled him to perform certain tasks. Hall said she originally got involved in 4-H with rabbits, but that it didn’t really pan out for her.

So rabbits were out, but Hall was still interested in participating in 4-H. So she turned to Cookie, who was a little over a year old at that point and fairly new to the Hall family. She said the two of them bonded over training, and they haven’t looked back over the last three years of competing.

“I’ve learned a lot training Cookie — just as much as he’s learned, if not more,” she said. “We’ll keep doing 4-H dog shows. Actually, I’ll probably keep doing dog training for the rest of my life.”

Though she’s local, Hall said she is a member of the Xenia-based 4-H club Pawz and Clawz. There has been a recent decline in Yellow Springs-based 4-H clubs, with only one club, the Dream Catchers, still active. Another youth club, Fair Play, folded last year due to low activity, and the Husky Hustlers — a rural club that has been active for more than 60 years — is now based in Fairborn as of this year. 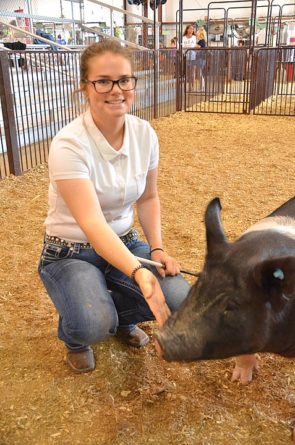 Longtime 4-H participant Amanda Everett posed with her hog, Floyd (as in “Pig Floyd”) at the Greene County Fair. Floyd won third place in his class in the market hog competition this year. Everett is one of dozens of youth from across the county who participate in livestock competitions through 4-H and FFA at the Greene County Fair every summer. (Photo by Lauren “Chuck” Shows)

In the middle of fair week, 17-year-old 4-H veteran Amanda Everett, from the Spring Valley 4-H Club Family Traditions, prepared to show chickens in the market poultry competition — or as she called it, “the chicken show.” The event is one of many livestock competitions in which youth compete every year. She’s been showing chickens since she was 12, and she said that she was confident in her chickens, but that the well-fed, white birds — each contestant must show three — were by no means shoo-ins.

“There is some pretty tough competition in [my competing class],” she said. “The judge will look at everything — whether they’re clean and well-taken-care-of, and he’ll assess the likely quality of the meat you’ll get from your bird. So I never know for sure.”

Everett had already had a success earlier in the week with her hog, Floyd.

“We got third place in our market class,” she said. “I was really proud.”

Everett said that, though she prefers hogs, she raises chickens each summer for 4-H because they’re relatively inexpensive to raise and grow rapidly: at six weeks old, her three chickens, which she raised from one-day-old hatchlings, weigh nearly 28 pounds in all. She said she always suggests chickens as a good first project for 4-H newcomers for these reasons.

“But I will say, bathing a chicken is not fun,” she said. “You have to bathe them with soap and a toothbrush — they can be a little high maintenance.”

While Everett tended to her fowl, Wes Wickline, a rising senior from Cedarville, stood near the chicken arena. Wickline said he’s been involved in the fair since before he was born — “My parents were junior fair board advisors,” he said — and this year, he achieved the honor of being crowned the 2019 Greene County Fair King. He said that, as king, it’s his duty to represent the fair in the public eye.

“One of my jobs is to hand out trophies after competitions, like the chicken show here,” he said. “The Fair Queen [Molly Rubio] and I also show the other county fair royalty around and show them what we have to offer.”

Wickline has been exhibiting steer at the fair with the Cedarville FFA for eight years, since he was 9. One of the cows he showed this year was won in last year’s calf scramble, an event in which youth attempt to catch a calf who has been turned loose to run in the steer arena.

Waiting outside the arena for her class to be judged, Everett pointed out what she called “fair fashion” — that is, the clothing trends that rise and fall in the 4-H and FFA subculture.

“We all wear boots and jeans, but a couple of years ago, white polo shirts were big,” she said. “This year everybody’s all about the plaid shirts.” She pointed to her own shirt. “As you can see, I still prefer a white polo.”

Since Everett raises market animals, she auctions them every year to sponsors — community members, businesses and family members, typically — who pay well over market value for the animals in support of the students.

“Usually I make around $800, which I put into next year’s animals,” said Everett. She also said that her buyers often elect not to actually take home the animals  they’ve bought at auction, which leaves her free to donate any meat products obtained from market animals to families in need.

Since this is Everett’s last year in 4-H — she graduated in the spring — any money she makes will go toward college. Her plan is to go into the firefighter and paramedic program at Sinclair College.

When all was said and done, Everett’s chickens didn’t place in the competition this year — but her chickens and hog did earn around $1,200 at auction. Though the lack of awards for the chickens was a slight disappointment, Everett said the best part of being at the fair every year has been the friends she’s made.

“I’ve met so many people from the county I wouldn’t have met otherwise,” she said. “It’s really fun to make new friends every year and see all the friends you’ve shown with in previous years.”

Everett also said she’d recommend 4-H to any young folks looking to make the most of their summers.

“It taught me confidence and responsibility and self-motivation,” she said. “I love 4-H.”