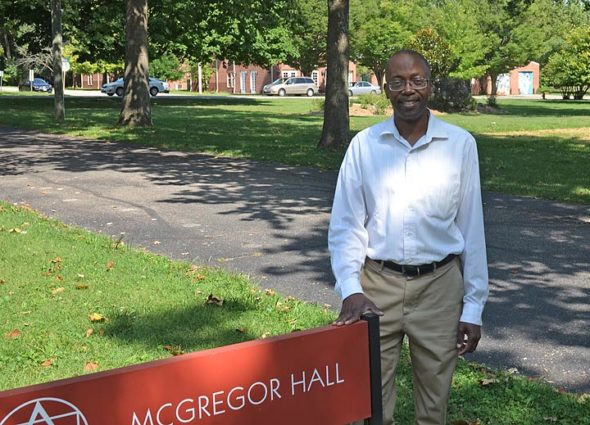 Associate Professor of History Kevin McGruder steps into the role of vice president of academic affairs at Antioch Collage later this month, replacing Lori Collins-Hall in that position. A tenured faculty member, McGruder was hired by the college in 2012. (Photo by Audrey Hackett)

A widely respected history professor at Antioch College is stepping into a new role.

Associate Professor of History Kevin McGruder has been named vice president of academic affairs at the college, replacing Lori Collins-Hall, who is leaving Antioch after five years. As the college’s chief academic officer, reporting to President Tom Manley, McGruder will have broad leadership responsibilities for Antioch’s curriculum and academic culture. A popular professor and mentor, he will continue to teach a couple of courses each year.

In an interview last week, McGruder said he is surprised, but pleased, to find himself in an administrative role at the college.

“I love teaching; I got my PhD at age 52 in order to teach,” he said. “At the same time, I’ve been involved in several startups and fast-growing organizations, and the thing that drew me to Antioch to begin with was the opportunity for responsibility.”

Prior to pursuing doctoral studies, McGruder worked for many years in non-profit community development in Harlem, N.Y. He has an MBA in real estate finance, and ran two entrepreneurial businesses in Harlem.

“I have a fair amount of management experience. The issues [that Antioch faces] aren’t foreign to me,” he said.

Hired to the history faculty in 2012, McGruder is one of the most seasoned members of the relaunched college’s faculty. In 2016, he was awarded the college’s Dr. Martin Luther King Award, and in 2017 was selected by graduates as the college’s commencement speaker. He was promoted to associate professor in 2018, when he also received tenure at the college. As a scholar, McGruder is the author of “Race and Real Estate,” a study of Harlem’s growth and development in the early 1900s, for which he was recently honored by the New York Association of Black Journalists.

“I think he’s an inspired choice,” President Manley said by phone this week, underscoring what he called McGruder’s “gravitas.”

“He’s a serious scholar and a really good teacher and a high-demand mentor. And he has knowledge of the world outside the academy,” Manley said.

Manley also emphasized McGruder’s understanding of Antioch’s strategic initiatives, which include empowering students to own their education, deepening experiential learning at the college and modeling social justice collegewide.

“Kevin not only understands our strategic initiatives, he’s helped to evolve them,” Manley said.

McGruder was nominated for the position by his fellow faculty. After Collins-Hall announced her plans to depart the college, Antioch administration and faculty worked together to determine the best approach to filling the role of chief academic officer. In a two-part process earlier this summer, Antioch’s faculty assembly advised college administration to seek an internal hire, then recommended McGruder for the role, according to Associate Professor of Biology and Environmental Science Kim Landsbergen this week.

Hiring internally would allow the individual to “hit the ground running,” she said. And McGruder was a natural choice.

“He is a person of great integrity and ability,” she said. “He’s proven himself to be a capable and valued colleague.”

Landsbergen also emphasized McGruder’s business background and prior managerial experience as assets to his expanded duties at the college.

“He brings an exciting blend of skills. He’s a historian, but he also has practical business acumen,” she said.

McGruder was part of the three-member executive committee of the faculty that recommended Antioch tap an existing faculty member for the vice president of academic affairs job. While he didn’t initially envision himself in the position, McGruder said he “shifted his thinking” as he learned more about the role and responsibilities, and received the encouragement of colleagues.

“They didn’t twist my arm or anything,” he joked. But the support and confidence of colleagues did contribute to his willingness to consider the job.

“I’m accountable to them, as well as to the broader college,” he said.

In his new role, McGruder will work closely with faculty and college administration to shape all aspects of the college’s academic program, including curriculum, the academic schedule and experiential learning components. The Olive Kettering Library, Herndon Gallery and The Antioch Review will come under his oversight. He will be a voice and advocate for faculty within the college’s administration, as well as playing a role in fostering what he described as a culture of “student success” at Antioch.

“We’re thinking about student success rather than retention,” he explained, citing as a model the historically black college Xavier University in Louisiana. The success of graduates of that institution is due to an academic culture responsive to the needs and experiences of individual students, rather than a “survival of the fittest environment,” according to McGruder.

“Our responsibility is to help them thrive,” he said of Antioch’s student body. The college currently enrolls about 100 students.

McGruder also stressed his commitment to serving the needs of faculty, particularly through promoting professional development.

“It’s important that this position be defined in a way that provides a level of focus on faculty needs,” he said.

After serious attrition in the 2017–2018 academic year, when 10 of 30 faculty left the college, faculty members have felt a new urgency to support and retain their colleagues, according to McGruder. The current faculty numbers about 23; six have tenure, with three more up for review.

Following a loss of professional development funds in recent years, Antioch has committed $1,000 per faculty member for the coming year to support creative and scholarly work, thanks to a fundraising effort for that purpose, according to McGruder.

“Faculty need that kind of support,” he said. “The [prior] loss of that money raised the question, ‘is scholarship valued here?’”

He also hopes to find ways to bring faculty together on campus to share their own research and teaching approaches.

“We can be so busy with institution building that we don’t get a chance to talk about research among ourselves,” he said. “How do we create a space to share our scholarship? How do we help each other become better teachers?”

While McGruder had planned to go on sabbatical for the fall and winter terms, he said he will continue his scholarly research “most likely at a slower pace,” in light of his new responsibilities. Among his current projects are a biography of Philip Payton, Jr., a founder of Harlem’s Afro-American Realty Company; an article about the founders of New York City’s Abyssinian Baptist Church; and research into the changes in racial residential patterns in his hometown of Toledo, Ohio, from 1970 to 2010.

And he will continue to teach.

“I don’t want to lose a connection with students. I enjoy teaching, and think I’m good at it,” he said.

McGruder lives in Yellow Springs and has become deeply involved in village life during his seven years here. A trustee of Central Chapel A.M.E. Church, he also sings in the World House Choir and serves as a board member of Yellow Springs Home, Inc. And he is a member of The 365 Project, where he has championed local history with the launch of the “Blacks in Yellow Springs” encyclopedia project and related student-led history tours of the village, among other initiatives.

As McGruder begins in his new position, former Provost and Vice President of Academic Affairs Lori Collins-Hall leaves the college this month. She and her partner, Chris Burgher, Antioch’s volunteer and events manager, are relocating to Florida.

“She did a really stalwart job under always difficult circumstances,” Manley said of Collins-Hall this week.

Hired in 2014 to serve as Antioch’s vice president of academic affairs, Collins-Hall helped the relaunched college gain accreditation in June of 2016. Around the same time, she was promoted to an expanded role of provost. In that position, Collins-Hall had broad operations and strategic responsibilities in addition to her academic affairs duties, according to Manley.

Antioch does not plan to hire an administrator to fill the provost job. Instead, college leaders are working to redefine the role of each existing member of the president’s team, Manley said. That group includes eight individuals overseeing key areas such as enrollment, student life, advancement, governance, operations and diversity, equity and inclusion.

Prior to the start of the fall term, there will be an announcement of the college’s redefined roles, according to Manley.

In an email this week, Collins-Hall called her decision to leave Antioch “bittersweet.”

“I am moving with my family to new adventures and opportunities in Florida, but leaving a place I have grown to love and given a critical piece of my spirit,” she wrote in part.

Asked to reflect on her achievements at the college, Collins-Hall emphasized the collaborative nature of her role, with “many great colleagues” working together to accomplish institutional goals. She said she spent much of her first year co-chairing and drafting, with Director of Innovation and Institutional Effectiveness Hannah Spirrison Montgomery,  the accreditation assurance argument that secured accreditation for the college in 2016.

Other achievements included developing and implementing Antioch’s new self-designed curriculum and modifying the academic calendar; modifying the college’s budget and creating a three-year budget planning model; creating a parallel pathway to the tenure track for the long-term employment of non-tenured faculty; and supporting the tenure and promotion of nine faculty members during her years at the college.

“I take great memories, powerful experiences and immeasurable learning with me,” Collins-Hall wrote of her time at Antioch.