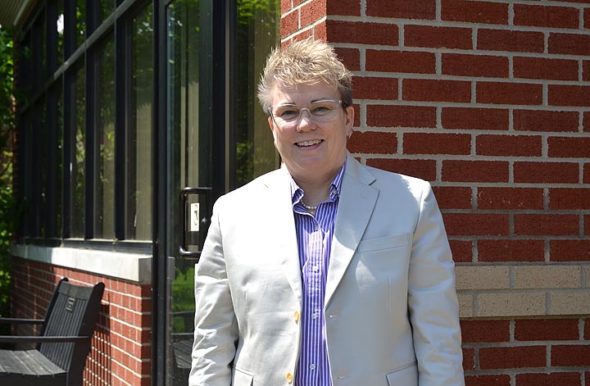 Terri Holden, Yellow Springs’ new superintendent of schools, moved into her new office full time on Monday, July 22, and is beginning her work by talking to people about their experiences of the local schools. (Photo by Carol Simmons)

Her official contract doesn’t begin until Aug. 1, but Terri Holden, the new superintendent of Yellow Springs Schools, is already on the job full time.

Most recently the executive director of teaching and learning at Winton Woods City Schools, located north of Cincinnati, Holden moved Monday, July 22, into the office recently vacated by Mario Basora, who has taken the top job at Huber Heights Schools.

In a recent interview, Holden talked about her early plans as Yellow Springs’ new head of schools.

Her primary focus, she said, is continuing to talk to as many people in the schools as possible, a task she set for herself after her hiring here in early June.

“I don’t think I’ve talked to enough people yet,” she said earlier this month. “I really want to meet with people, to say, ‘You’re a vital part of Yellow Springs Schools. What’s your experience?’”

She said these conversations will help guide her in setting goals and priorities with the school board.

At the same time, however, Holden said there are two issues that need immediate attention: coming up with a plan for upgrading the district’s school buildings and the development of a new strategic plan, as the 2020 plan comes to an end next year.

She said her goal is to have a rough plan for the board as early as September for moving forward with work on a new strategic plan.

Her desire for addressing building needs is to work closely with the facilities task force, which was formed by Basora in March, to be able to present a proposal to the school board by mid- to late fall.

“The sooner the better,” she said.

She is hopeful that her experience at Winton Woods Schools, where she also held positions as a principal and classroom teacher, will help inform the facilities discussion here.

She noted that there are several parallels between the two districts. Primary is that Winton Woods has a relatively high tax base, which she said contributed to the failure of several levy attempts before the community agreed on a plan that called for going from six schools to two, which were to be constructed new.

Community meetings were integral to the final levy success, she said.

“We talked about visioning, about our vision for the schools in the future,” she said. Important conversations addressed such questions as “How do students learn?” “What environment best helps learning?”

The move from six buildings to two also was seen as a cost savings, she said.

But ultimately, “we wanted to make the district a place where people wanted to come.”

“Another parallel is open enrollment,” which she characterized as important features for both districts.

“My goal is to maintain open enrollment numbers [here],” she said.

The Winton Woods community also has an issue with housing needs, she noted, adding that she has come to see a “symbiotic” relationship between housing availability and school viability.

“All of these problems are so complex and so layered and so tangible,” she said.

And she has dealt with the local affordability issue first-hand, as she attempts to move to town.

Finding a house has “been frustrating, but a very good learning experience,” she said. “I can clearly see that there is a lack of affordable housing at every level.”

But she’s hopeful of finding something soon, she said. She and her wife, Holly Smith-Conway, an instructional technology coach with Hamilton County Educational Service Center, have already had an offer on their Cincinnati home.

Holden said that they are excited about moving to Yellow Springs, where she appreciates the level of engagement she sees in the community.

She said she hadn’t been looking to leave her former job, but “everything lined up” professionally and personally with the opportunity here.

She describes herself as “passionate” about Project-based Learning, and was a leader in introducing the pedagogy to Winton Woods.

A native of Cincinnati, Holden, 56, entered the education field after becoming disenchanted working in business. She has a doctorate in education from the University of Cincinnati.