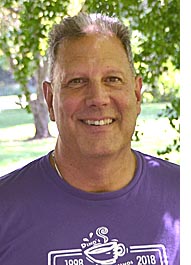 For one, voters will have to manually write or type in his legal name — “Dean Pallotta” — and not the name he goes by and which is associated with his eponymous downtown coffeeshop.

But the longtime local businessman decided to run anyway after the official filing deadline so that the voice of the business community might be heard.

“I wasn’t planning on doing this, but out of necessity, I said, ‘I have to do this,’” he told the News this week.

Pallotta is one of five candidates running for three open seats on Village Council, and the final candidate to be profiled by the News. Previous articles have covered the other challengers, James “Jim” Johnson and Laura Curliss, and incumbents Marianne MacQueen and Lisa Kreeger.

Pallotta, 56, is the owner of Dino’s Cappuccinos, which he opened with his wife, local realtor Sheila Dunphy, in 1998. He is also an alternate on Planning Commission and was formerly a member of the Village Economic Sustainability Commission and Community Resources.

Serving in local government has been rewarding for Pallotta, who, despite his status as a commission alternate, has frequently participated as a full voting member because of other members recusing themselves.

“It’s been good to get involved,” he said.

And when his friend and fellow downtown business owner Christine Monroe-Beard was not certified as a candidate for Council due to issues with her petition, Pallotta decided to register as a write-in candidate.

“It’s next to impossible,” Pallotta said of his chances. “But I thought about the things I’m doing,” he added. “I’m not somebody coming in from the outside, a change of guard.”

Pallotta is also running because he believes it is important to maintain consistency on local boards. For instance, he is a member of the committee working on the 10-year update to the Village’s Comprehensive Land Use Plan. If elected to Council, he would like to stay involved on that process, which he sees as critical to the town’s future.

“This is the future of what we want to do as a village,” Pallotta said of the plan. “Right now, we’re building the plan so we see growth.”

Growth — specifically economic growth — is critical to the Village’s success and a key to keeping the town affordable, Pallotta believes.

“Growth does need to happen,” Pallotta said. “The Village realizes that you need business so that you don’t have to keep taxing the residents.”

Pallotta added that, ideally, the village would have a better “blend” of business and residential than it does currently.

And when it comes to the types of businesses, Pallotta said “mom and pop” stores like Dino’s are important, but that a variety of businesses — including larger firms, those providing white-collar jobs and technology-based industries — are needed, too.

As an example, Pallotta cited the success of attracting Cresco Labs to the Village-owned Center for Business and Education.

“Cresco is a great first step to developing new tax revenue dollars for the Village,” Pallotta wrote in a platform document.

Pallotta is originally from Independence, a suburb of Cleveland. He attended the University of West Virginia and worked in sales and management in the pager industry in the 1990s. While living in Columbus, he met Dunphy, of Yellow Springs. The couple married in 1991. And after commuting to town for work for many years, they finally moved to the village in 2012.

Pallotta said he would bring many of the skills he gained in business to Council. For instance, he has learned the need for sometimes making quick, practically minded decisions, the importance of not taking things personally and the ability to manage people, he said.

Few business owners have served on Council in recent years, Pallotta believes, because they may fear negative repercussions for their business.

“They are probably afraid it will hurt their business if they put themselves out there,” Pallotta said.

Pallotta doesn’t necessary believe that the concerns of local businesses are not taken into account by Council at present. Instead, Pallotta believes the fair-minded and teamwork-oriented approach that has served him well in business would also work on Council.

“Council is not just individuals. You work together as a team,” he said.