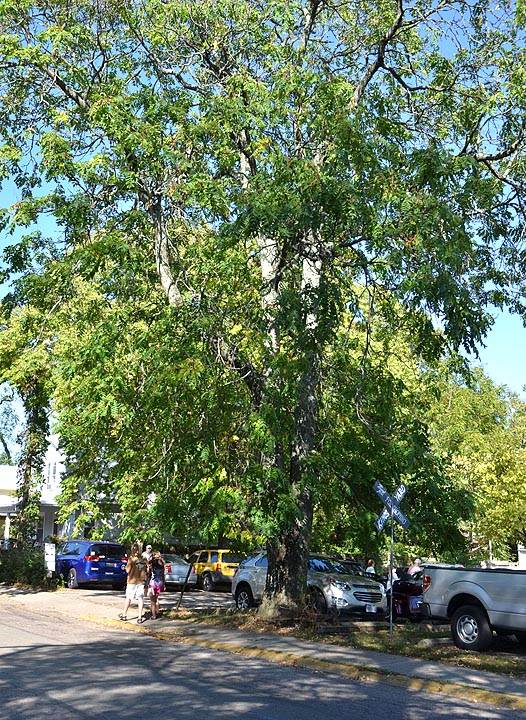 Locally, tree-of-heaven grows in weedy patches along buildings and the bike path, and in commanding spots around town. Pictured here is a stately specimen at the back of Kings Yard. While attractive, tree-of-heaven is highly invasive, and a prolific seeder. A single female tree-of-heaven may produce more than 300,000 seeds each year. Clusters of winged seeds and large compound leaves are two distinctive features of this tree species. (Photo by Audrey Hackett)

Yet tree-of-heaven … isn’t. Brought to this country in the 1700s as a horticultural specimen and shade tree, tree-of-heaven (Ailanthus altissima) is one of North America’s most invasive tree species. It grows incredibly fast, seeds prolifically and even releases a toxin into the soil that inhibits the growth of other plants.

Tree-of-heaven, also called ailanthus, is one of 38 species on Ohio’s invasive plant list. But while you won’t find it for sale at your local nursery, the tree is abundant in and around Yellow Springs.

“There is a lot of tree-of-heaven around town, and it especially likes to grow beside buildings and in open areas,” according to Macy Reynolds, president of the YS Tree Committee.

Often planted as an urban tree, ailanthus is famous, or infamous, for its ability to grow anywhere — up through the merest cement cracks. That hardiness is celebrated as a metaphor for human resilience in the 1943 novel, “A Tree Grows in Brooklyn.” The tree in question? Tree-of-heaven, pervasive across New York City.

But ecologists aren’t quite so enamored of ailanthus’ toughness. Most common in urban areas, disturbed soils and forest edges, tree-of-heaven can also take advantage of gaps in mature forests, displacing native tree species. And because it’s a prolific seeder, the tree growing in your yard could end up, borne by wind and water, in one of our local woods.

In this month’s installment of the News’ “Invasive of the Month” series, we take a frank look at a downright devilish tree.

Look up. The palm-like “fronds” of ailanthus are one way to identify this tree. Its large, compound leaves somewhat resemble those of two native species, black walnut and staghorn sumac. But if you crush a leaf and smell a strong odor resembling rancid peanut butter or cat urine — that’s tree-of-heaven. Another of its common names is “stink tree.”

Tree-of-heaven is a weedy tree. Saplings grow in clumps, and young bark is reddish in color. Mature trees grow a stately 80 feet or more, with smooth, grey bark.

As a recent walk around Yellow Springs revealed, tree-of-heaven is readily identifiable this time of year by brown clusters of winged seeds, called samaras. Yellow-orange at the end of summer, these seeds, which are produced by the female tree mellow to brown and can remain on the tree through the winter. Female trees can produce seeds in staggering abundance — over 300,000 per year.

Two especially large local tree-of-heaven specimens can be seen at the back of Kings Yard, between the parking lot and South Walnut Street, and near Nipper’s Corner. Ailanthus also abounds along portions of the bike path. Fence rows, old fields, pastures, utility rights-of-way and unmanaged urban green spaces are other areas where tree-of-heaven thrives, according to a fact sheet from Ohio’s forestry division.

Unchecked, tree-of-heaven can alter local ecosystems by outgrowing native species and releasing chemicals that suppress the growth of nearby plants. More tree-of-heaven means less of everything else, including valuable forest species such as oaks.

Just how fast does ailanthus grow? Too fast, according to forest ecologist Kim Landsbergen, associate professor of biology and environmental science at Antioch College. In unpublished research from one of her students, tree-of-heaven saplings were found to shoot up twice as fast as native saplings in relatively intact forests in Adams County, Ohio.

“What if you had one third-grader who grew twice as fast as the others?” Landsbergen asked, by way of dramatizing this species’ freakish growth.

While ailanthus is most common in edge environments, it can enter mature forests as a result of some natural disturbance, such as fire or disease.

The emerald ash borer, a deadly pest that has killed most ash trees in the upper Midwest, has reshaped our local landscape by eliminating 15% of all living, standing trees, according to Landsbergen. That kind of situation is ripe for invasives such as honeysuckle and tree-of-heaven, she said.

Fortunately, ailanthus is largely under control in Glen Helen, according to Glen land manager Ben Silliman.

The Glen previously had some large specimens, particularly in more recent property acquisitions, but “for the most part [tree-of-heaven] is eradicated,” he wrote in a recent email. Silliman added that he does a sweep around this time of year to remove any sprouts.

Still, with seeds in the soil, ailanthus is primed to rise in area forests should opportunity strike. And that’s why it’s imperative to keep the trees in check, local experts say, removing seedlings and saplings, and — hard as it might be — killing mature trees.

The first word of advice is: don’t plant them.

“Tree-of-heaven is highly invasive and should not be planted in Ohio,” an Ohio forestry division fact sheet warns.

The second word is: get rid of them.

“Without a question, if you have ailanthus in your yard, you should remove it,” Landsbergen said.

She recommends planting a fast-growing native tree such as tulip poplar in its place.

And the third word is: don’t simply cut them down — please.

“Cutting alone is usually counter-productive because ailanthus responds by producing large numbers of stump sprouts and root suckers,” according to a fact sheet from the Ohio Invasive Plants Council, or OIPC.

The tree is a tenacious sprouter, the Glen’s Silliman confirmed.

If you simply cut the tree, or even cut and treat the stump with an herbicide, “you will end up with many, many, many baby sprouts,” he said.

Young seedlings can be pulled or dug up by hand. Take care to remove all parts of the tree, including roots and fragments, or the plant will regrow.

For more established trees, experts recommend a technique called, rather gruesomely, “hack-and-squirt.” The method involves cutting a band around the tree and applying an herbicide such as Roundup to the cut area.

“Hack-and-squirt” works best on large stems in the fall and late winter/early spring, according to the OIPC fact sheet.

Those adverse to using herbicides must be willing to continuously cut these trees over a period of years, according to Landsbergen. Such labor-intensive methods aren’t practical in many cases, she added.

One non-chemical alternative may be forthcoming. Scientists are exploring using a native wilt-causing fungus as a possible biological agent against these trees. If the method proves practical, a tiny, soil-bound species may be the means of bringing the mighty tree-of-heaven down to earth.