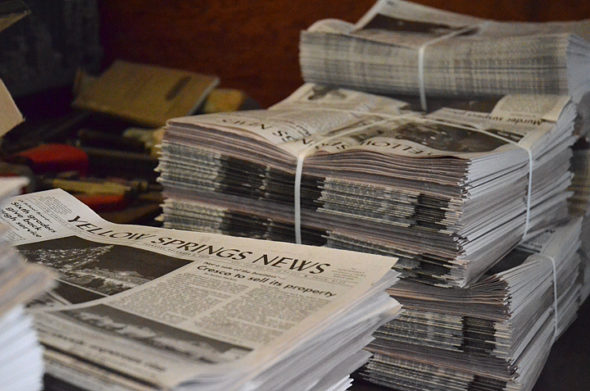 The news about local news has mostly been bad news.

Already faced with declining readership, shrinking advertising and growing digital competition, the newspaper industry has been hit hard with a string of cynical corporate buyouts, takeovers and mergers. Recently, two such developments have dimmed the future of journalism in our region.

First is the merger of the No. 1 and No. 2 newspaper chains, Gannett and GateHouse, approved last month, which puts one in every six newspapers in the country under one roof. The majority of Ohio’s local newspapers are now owned by the same out-of-state-firm, including the Columbus Dispatch, the Cincinnati Enquirer and the Akron Beacon-Journal. The buyer, GateHouse, is backed by the private equity firm Apollo Global Management, which stars in another development.

The Cox Media building in Dayton (photo via http://coxmediagroupohio.com)

Two weeks ago, the Federal Communications Commission approved Apollo’s $3.1 billion purchase of Cox Media, which owns the Dayton Daily News, WHIO TV and other radio and news outlets around the country. The company announced soon after that three area print publications — the Dayton Daily News, the Springfield News-Sun and the (Hamilton) Journal-News — would go down to being published three days per week once the deal goes through because of an FCC rule preventing an outlet from owning both a TV station and daily newspaper in the same market.

When executed by private equity firms buyouts usually result in massive layoffs of journalists and gutted newsrooms. With reduced coverage, regurgitated press releases and recycled national news often fill such newspapers. There’s even a term for such products, ghost newspapers, as they are only shells of their former selves. With a singular focus on making money — not serving their communities — the companies not only abdicate their mission, they erode the public’s trust in the entire institution.

In a piece last week titled, “A letter to the next owner of the Chicago Tribune,” Tribune journalist Mary Schmich pleads for a benevolent owner for her paper, which is being eyed by a private equity firm reputed to be a “corporate strip-miner.” She writes, “All over the country, newspapers are being bought by people who show no evidence that they understand the nature of civic trust, or what it takes to run a real newsroom. Their relentless chase for money at the expense of essential journalism has made it harder for journalists to do the work required to keep communities healthy.”

Many communities have already lost their newspaper entirely, with millions of Americans now living in what are called “news deserts.” Since 2004, 1,800 newspapers have folded nationally, including one-third of all newspapers in Ohio. According to a recent Policy Matters Ohio report, statistics show when newspapers close, local governments are less accountable to their constituents, municipal debt deepens, voter turnout drops and there is both more partisanship and more pollution. 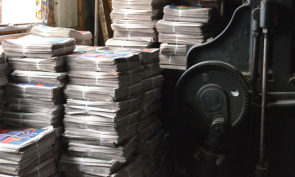 So what does this have to do with the Yellow Springs News? Traditionally, the News has been employee-owned, frugal to a fault and persistently mindful of its contract with the community. We are obligated to ask hard questions, dig deep and cover the town as broadly as we can. We are accountable to you, not distant shareholders. And our polestar is not extracting profit but building trust by giving you the information you need to navigate your life and stay connected to your community.

At the same time, we are subject to the same forces now propelling media consolidation in the wider world. We need to find new ways to bring value to our community, and new audiences to reach. There will always be stories to tell about our lively village and its fascinating townspeople, and I hope there will always be a Yellow Springs News to tell them.

As our village has shown in other areas, when it comes to local news, I believe we can together buck the trends and pioneer a new path. The support of our advertisers and subscribers as we do so will be essential. In a place where people don’t have to be goaded into buying local, but implicitly understand how we reinforce one another — how my strength bolsters yours, and yours mine — we are further along than many. And that’s good news.