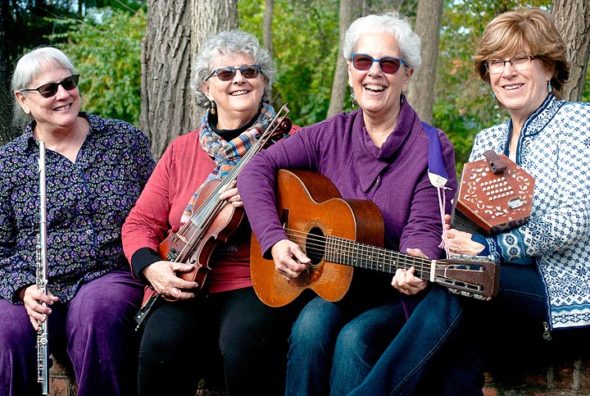 ‘Music in Friendship’— 31 years of Heartstrings

When Sarah Goldstein and Mary Beth Burkholder first met in October of 1988, they formed a fast friendship over their shared love of music — but they couldn’t have guessed that they would spend the next 31 years creating music together. Heartstrings, the all-women traditional musical ensemble that includes Goldstein, Burkholder, Carol Van Ausdal and Linda Scutt, will perform their annual holiday concert at the YS Arts Council on Saturday, Dec. 14, beginning at 7:30 p.m.

The four current members of Heartstrings sat down together in the YS News office to relate some of their oral history. Goldstein and Burkholder, who were both mothers of young children in the late ’80s, said they met at a kids’ playgroup, and bonded over the fact that they both played hammered dulcimer. They soon began playing hammered dulcimer duets together, and added fiddle to the mix.

“The first shows we played were at The Winds during the holiday season  — at least I think so, it’s been a long time,” Burkholder said.

“They paid us in food,” Goldstein added. “We really liked that a lot!”

For a few years it was just the two of them, playing under their own names at parties and other gatherings. In 1992, Carol Van Ausdal moved to the village, and she said she first discovered Burkholder and Goldstein when she noticed an ad in the YS News — a picture of a fiddle and a dulcimer, advertising folk music for weddings.

The group’s recollection is a little fuzzy on exactly who joined when, but they agreed it was the late Carolion who brought together the then-members of the group, which also included Christina Hess and Carolion herself. Soon after, Linda Sikes and Kathryn Gray joined, and the group grew from two members to seven.

With the band formed, all they needed was a name.

“I think I came up with Heartstrings,” said Goldstein, “but really we all came up with it, because we all spend a lot of time tuning all of our stringed instruments and talking about how many strings there are altogether on our instruments.”

All of the members of Heartstrings, past and present, have been multi-instrumentalists, with each member rotating what they play and when. The long list of instruments its members play include hammered dulcimer, fiddle, concertina, mandolin, banjo, cello, flute and guitar, along with some less recognized instruments like the psaltery, a stringed instrument in the zither family, and the crumhorn, a 15th century double-reed wind instrument.

Heartstrings has always been a band of women, though they’ve worked with men as guest artists occasionally over the years. Their history has evolved alongside some of the village’s other well-known women’s institutions: Heartstrings played its first regular gigs at the WEB Center, or Women’s Enterprise Business, which hosted regular coffeehouse events in the early 1990s, and the band continued to play there until the WEB Center stopped operating. They participated several times in Women’s Voices Out Loud, which exhibited the art and featured the performances of local women for 35 years until it ended in 2015. Heartstrings played for the opening of the Women’s Park on Corry Street in 1998, and they’re commemorated on one of the tiles there, which reads, “Heartstrings: Music in Friendship.” 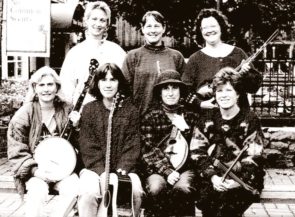 The band’s lineup has changed over the years — Carolion, Gray and Sikes left the band, and Dottie Palsgrove joined; she left Heartstrings when she moved away in 2015. The hardest loss was that of Christina Hess, who stayed with Heartstrings until she died in 2011.

“That was pretty devastating emotionally to the group,” Burkholder said. “And we didn’t play in public for quite a while after she died.”

“But then Linda [Scutt] stepped in — thank goodness — as our guitar player,” Van Ausdal said.

Wanting to honor the late Hess, the group decided to play a concert in her memory in 2012.

“Yellow Springs has so few small venues, which can be a problem, but we got in touch with the YS Arts Council to see if we could use their performance space,” Van Ausdal said.

The group played their first holiday concert there, and donated all the money to the YS Arts Council in memory of Hess.

“It went well, so the YS Arts Council asked us if we would keep doing it,” Burkholder said.

Heartstrings has continued to support community groups with its music over the years, performing at benefit events for Chamber Music in Yellow Springs, the YS Children’s Community Center, YS Home, Inc. and the Little Art Theatre.

As members of the band have changed, so has the band’s style; while Heartstrings’ repertoire initially centered around Appalachian old-time and Irish tunes, the members’ changing interests have meant the addition of Swedish and Eastern European tunes, among others. Sometimes, the gigs themselves have demanded a change in genre.

“We got hired to play at a private dinner party that was all about Italy, so we learned a whole set of Italian music,” Burkholder said. Heartstrings also learned a variety of Cajun music when they provided pre-show music for the YSKP production of “Gaston Boudreaux.” The group added Klezmer music to its inventory after Burkholder took a class to convert to Judaism.

“I had to do a project for the class, so I said, ‘OK, we’re going to learn all this Klezmer music,’ and then when I had to present the report, we all went in and played it,” Burkholder said.

Each of Heartstrings’ four current members has classical music training — three of them play in the YS Chamber Orchestra — but Van Ausdal said she has enjoyed the contrast inherent in playing with Heartstrings.

“I started playing old-time music because I played orchestra in college, and it was too serious,” she said. “Learning to play old-time was so joyous, because you don’t have to be experts.”

Each of Heartstrings’ members has also had to mold their time with the band around family life and careers, though their children are all now grown and they have mostly retired — Van Ausdal was a pediatrician at Dayton Children’s Hospital; Goldstein was a Montessori teacher; Burkholder worked as a weaver and at Friends Preschool; and Scutt was employed as a registered nurse and now works part time providing geriatric care.

“A lot of people wonder what they’re going to do when they retire — we don’t wonder,” Van Ausdal said.

Three decades is a long time for any group of people to stick together for any reason, but Scutt said it’s the relationships at the root of Heartstrings that account for its longevity.

“We’ve all become friends — and if you don’t have the horrible ego that a lot of people get, you can stay together,” she said.

Despite all the changes over the years, the one thing the members of Heartstrings don’t see changing any time soon is the existence of the group itself.

“We probably know thousands of songs at this point,” Goldstein said. “I see a vision of us sitting in rocking chairs together some place, wired together with hearing aids and holding our instruments.”

Heartstrings will present their annual holiday concert at the  YS Arts Council on Saturday, Dec. 14, beginning at 7:30 p.m. Doors open at 6 p.m. Suggested donation is $10, with all proceeds to benefit YS Arts Council.