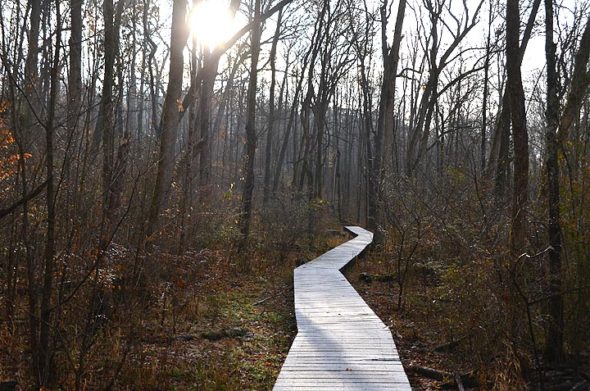 Poems of renewal at winter solstice

what reaches up also
descends below. The light
that rims us answered
in deep dark.

—from “Reflections,” by Pauletta Hansel

The veil between worlds is thin at the winter solstice, or so it feels. Light and dark, birth and death, sky and earth — all draw close, almost reach, almost touch …

Winter solstice — the longest night of the year, when the Earth is at its maximum tilt away from the sun — falls on Saturday, Dec. 21, in the northern hemisphere this year. A week and a day prior, area residents are invited to enter the “thin time” at Tecumseh Land Trust’s eighth annual Winter Solstice Poetry Reading, held Friday, Dec. 13, at 7 p.m., at Glen Helen’s Vernet Ecological Center.

“It’s an introspective time of year,” organizer and local poet Ed Davis said. “Poetry, whether spiritual or funny, is just right for the winter solstice season.”

Twelve area poets will read original work for five minutes each, followed by a reception sponsored by Wheat Penny and an open mic session. Suggested donation is $5, to benefit Glen Helen and Tecumseh Land Trust, or TLT. Past events have raised around $300, according to Davis.

Each annual reading has a theme, and this year’s is “Renewal and Regeneration.” Poets are encouraged but not required to read work that fits or illuminates the theme, according to Davis.

Past themes have given the reading a feeling of cohesion and thoughtful conversation, as if poets were talking to one another through their work, Davis added.

To featured poet and villager Alexandra Scott, who works for the YS Chamber of Commerce as special events coordinator, the theme of regeneration is especially timely for local residents.

“Yellow Springs has dealt with a lot of tragedy and loss this year. I feel like we’re all together in a healing process,” she said.

Poetry and the arts generally are integral to healing, Scott believes.

“Art that uses language is really good at letting people know they’re not alone,” she said. “We’re all human beings on a rock hurtling around the sun. We’re not as different as we think we are.”

Scott, who has been writing “ever since I could hold a pen,” creates poetry that she considers inspirational — but vulnerable.

“You’ve got to write about the real stuff, the hard stuff,” she said.

A Winter Solstice Poetry veteran, Scott took part in the event three years ago. She noted that the annual reading reliably brings together different voices and poetic styles.

“All the unique styles and energy make a beautiful whole,” she said.

Scott’s mother, Columbus resident Karen Scott, is also reading at this year’s event. She, too, has read previously, and was invited back on the strength of her work.

A poet and substitute teacher, Karen Scott is active in the Columbus poetry community and the Ohio Poetry Association — whose president, Chuck Salmons, is another reader in this year’s Winter Solstice line-up.

“We’re really happy to have him, and everybody who’s reading,” Davis said.

The theme of regeneration strikes a deep chord with another featured poet, Pauletta Hansel of Cincinnati.

The solstice’s interplay of light and dark “feels rich to me as a writer,” she observed. “Regeneration happens in the dark — like seeds,” she added.

Writing, too, emerges from the metaphoric dark, bringing the writer from a state of mystery and unknowing into greater knowing, Hansel explained.

“It’s the old saying of ‘how do I know what I’m thinking or feeling until I write about it?’” she said.

Hansel has been writing poems since she was a child, and has published seven poetry collections. Childhood and “the fields of memory” inform her work, she said. Hansel grew up in Appalachian Kentucky, and maintains strong links to that heritage, in her life and writing. From 2016 to 2018, she served as Cincinnati’s first Poet Laureate. As laureate, she reached out to “groups who might not think of themselves as writers,” including children, those with dementia and their caregivers and people in recovery.

“Everyone can benefit from thinking about their lives through image and metaphor,” she said.

For Hansel, poetry is “a way of paying attention to what matters.” Slowing down to read or write a poem, “we reflect on our lives in a new way,” she said.

And attention is a reciprocal process, she believes.

“We’re changed by the act of attention, and what we pay attention to is also changed,” she speculated.

“The audience is so much a part of the magic of it,” Davis observed.

Audience to poet, poet to audience — the attention and acknowledgment flows both ways, he said.

“There’s a hush; you’re put into a different space. It’s not the kind of event that people just get up and leave from,” he added, with a laugh.

The lead organizer of the reading for eight years, Davis has worked with fellow members of TLT’s education committee to craft an event that — year after year — draws at least 100 people from the village and beyond. For some area residents, the reading has become a winter holiday tradition, according to Davis.

“It’s nature-focused, it’s secular, and at the same time, it’s about the stuff that goes straight to the heart,” he said.