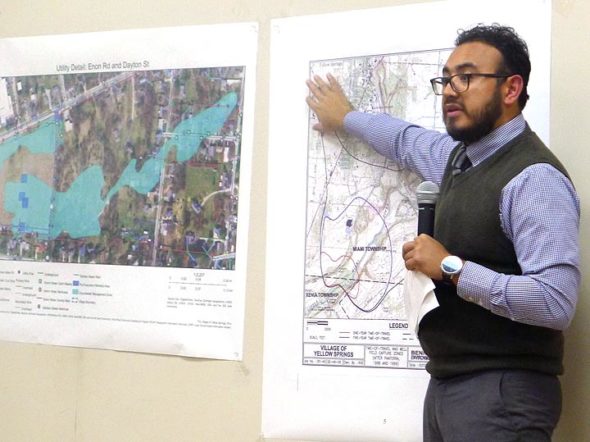 At a public meeting on the Vernay cleanup on Thursday, Nov. 21, Village Manager Josué Salmerón pointed out that the former Vernay rubber plant, the site of an EPA-supervised environmental cleanup, is within the recharge zone for the Village’s drinking water. (Photo by Megan Bachman)

How good is the current proposal to clean up the Vernay Laboratories site? How much contamination is there? Are municipal water supplies protected? What can be done with the land when it is cleaned up?

Those were a few of the questions asked at a public meeting on Thursday, Nov. 21, on Vernay’s most recent plan to clean up contamination at its former local rubber plant on Dayton Street.

The Village organized the gathering as a follow-up to an October meeting hosted by the U.S. EPA, which is evaluating Vernay’s proposal. The agency expects to green-light a final cleanup plan next year, the culmination of a nearly two-decade long process.

“As you recall from the last meeting, there were a lot of questions and folks wanting to know more,” Village Manager Josué Salmerón said at the start.

Around 30 people attended the meeting, which was largely taken up with questions and answers.

The Village also presented an overview of the remediation proposal, publicly shared its appraisal of the plan and invited its two environmental consultants to give their assessments.

Vernay operated at its Dayton Street site from the early 1950s until 2005, for many decades using chlorinated solvents and disposing of them onsite. Those contaminants are now present in the soil and bedrock below the property and in a plume in groundwater below the site and under residential neighborhoods to the east.

The company’s most recent cleanup plan, submitted this summer, has three central components: removing the soil in six concentrated “hot spots” on the property; continuing the operation of four pump-and-treat wells; and replacing the storm sewer and seal that pathway for migration of contaminants.

A public comment period on the final plan is expected in early 2020 and, if approved, the cleanup could begin as early as summer 2020.

Among the Village’s concerns is the possible threat to municipal water supplies from contamination at the site, which include volatile organic chemicals, or VOCs, that are known and likely carcinogens and nervous-system toxins.

A map from the Village’s source water protection plan, shared at the meeting, showed that the recharge zone for the municipal well field encompasses the western half of the Vernay property. The boundaries are approximate, Village officials added.

Local geologist Peter Townsend spoke from the audience, saying that he is concerned that the deeper Brassfield Aquifer, which is the source of the village’s water two miles south, was never tested at the Vernay site.

“We do know that the recharge area for the primary aquifer is in this area,” he said. “This water is eventually going to end up in the well field,” he aded.

According to Village Public Works Director Johnnie Burns, the EPA recently asked the Village to “step up” its testing of VOCs at its monitoring wells near the wellhead. The Village is also adding four new test wells next year, further away from current production wells.

“We’ll be that much further out to be able to catch anything before it actually comes into our system,” Burns said.

Village officials also expressed their worries about the presence of municipal utility lines on the Vernay property.

“Every one of our utilities is in that area — water, storm sewer, sanitary sewer,” explained Environmental Commission member Tom Dietrich.

That’s concerning because of the possibility of contaminated groundwater backfilling local water pipes in the event of a water line break, Burns said. Such an event is inevitable, he added.

Burns also voiced fears about his crew being exposed to contamination when servicing a utility line at the site. In response to those concerns, the EPA has given the Village a number to call for assistance, Burns explained.

Burns added that the Village typically knows soon after a water line breaks, as residents call to report the loss of water to their properties.

The Village is also making sure that valves on either side of the line are in working order so it can isolate the break.

In a private meeting with the EPA last month, the Village made a request that the EPA find out how contaminated the areas are near village utilities. In addition, the Village also brought up the issue of the unnamed creek that travels through the Glass Farm Conservation Area.

“The EPA were surprised to hear some of the uses of the stream. They were also surprised to see how close our water mains are to the hot spots,” Salmerón said. “One of our follow-ups is requesting additional testing near our utilities.”

Overall, the Village is taking its responsibilities to respond to the plan seriously, Salmerón said.

“We have a mandate and a responsibility to act on this position,” he said of the Village’s interests.
Environmental consultants respond

Also speaking at the meeting were the Village’s two environmental consultants working pro bono on the project: Denise Taylor, an environmental engineer and professor at the University of Dayton, and Abinash Agrawal, a Wright State University professor who specializes in contaminated sites.

Agrawal and Taylor have been meeting with members of the Environmental Commission and Village over the last several months. In total, the Village’s Vernay working group has had more than 13 meetings, according to Salmerón.

Taylor’s main message to villagers was that they should begin preparing their comments to the EPA.

“Be prepared to share the things you most want to protect,” she said.

Taylor also suggested that EHS, the environmental firm hired by a group of neighbors who won a lawsuit against Vernay to give them oversight of the cleanup, is an “excellent resource” for villagers as an independent group that has “looked closely at the data.”

EHS has criticized the modeling done by Vernay showing that the plume is contained; the firm believes the plume is continuing to migrate into neighborhoods east of the property. In addition, EHS has requested that Vernay add six additional areas to its proposed soil excavations.

Taylor and Agrawal both criticized the standard to which Vernay is planning on remediating the soil. Those standards should take into account the possibility that soils may continue to leach chemicals into groundwater, which can vaporize and enter homes, sickening occupants.

“The actual standard should be what kind of vapors could be released [at that level]?” Agrawal said. He added that he agrees with the neighbor’s group that Vernay should remove a larger area of contaminated soil.

“They should expand that area,” he said.

Agrawal was also critical of Vernay’s plan to only remove soil down to 20 feet and not remove contaminants that extend into the bedrock as deep as 70 feet.

“The bedrock contamination has not been addressed,” he said.

Agrawal, however, believes that “well-established, proven technologies” exist to destroy the contamination in place, using a combination of biological and non-biological injections.

“At least the Village should insist that the contamination should be destroyed and not persist for generations,” he said.

The EPA is looking into whether such technologies might work at the Vernay site, according to Salmerón.

Dietrich re-iterated the EPA’s intention is not to completely remove the contaminants, but cleanup the site to EPA standards.

“They are not going to get all of the contaminants out, they are going to clean it up to protect human health up to EPA standards,” he said.

Attendees asked a variety of questions about the contamination at the Vernay site and the company’s plan to deal with it.

Some questions were easily answered, such as “what is a plume?” (answer: water carrying some amount of dissolved chemicals), “how many data points were used to determine the plume?” (answer: 45 monitoring wells), and “how much will this cost? (answer: $7.4 million over its first 30 years).

Other questions yielded multiple answers, such as, “how much delay has there already been?” (The answers, shouted out from the audience, were 18 years, when Vernay signed an order with the EPA to come up with a cleanup plan, and 30 years, when the contamination was initially discovered.)

Most challenging were questions involving a variety of unknowns.

For example, “how much contamination is there?” resulted in a complicated answer from Agrawal.

Similar industrial facilities “go through solvents quite frequently,” Agrawal said, and the solvents themselves are used in 55-gallon drums.

“There would be hundreds of drums used,” Agrawal said.

Agrawal added that companies typically didn’t keep good records on the amount of chemicals they used, whose instructions for disposal, at least during the 1960s and ’70s, were to “pour it into the ground and let it evaporate.”

“It’s not the fault of the users or the factory,” he said.

The question, “when was the last drum dumped?” went unanswered.

As with last month’s EPA meeting, concerns were aired over vapor intrusion. But little clarity came on whether or not area residents should be worried.

One Dayton Street resident said the vapors in his home were tested, and no contaminants were found. Another requested testing be done on their property, as he is “surrounded by the plume.”

Another attendee brought up the possibility of contamination through a flooded basement or sewer backup. Agrawal responded that if contamination was present in the groundwater, it could enter someone’s home during a flood.

Another attendee asked if contaminants might be released in the immediate area while soil is being excavated. Taylor responded that the EPA is requesting that Vernay submit a plan for reducing the risk of that happening.

Paul Graham, a former Vernay employee, stated that the pesticide contamination at the property, which is concentrated in a plume on its northern section, was not caused by Vernay.

“I just want to make it publicly clear that it was not just Vernay responsible for the contamination,” Graham said.

Another attendee suggested that the pesticide contamination may have come from a garden center that was once located on the site.

Either way, according to Dietrich, Vernay has taken responsibility for remediating the pesticide contamination, which is concentrated in one of its “hot spots” to be removed.

In response to a question, Salmerón confirmed that Vernay has a legal obligation to clean up the site. However, he added that the company could always choose to further delay the cleanup “if there’s something they don’t agree with.”

Taylor added that the EPA process involving Vernay is akin to a “negotiation.”

Asked what could be done with the land, the Village clarified that the decision to sell it is Vernay’s. That said, MacQueen affirmed that the Village wants it to be put to use at some point.

“Clearly it is in the Village’s interests to have this land remediated and put to use,” she said.

Vernay is proposing deed restrictions that the land only be used for industrial or commercial purposes — it will never be used for housing, MacQueen said. However, MacQueen suggested that “solar fields” or “prairies” may be good options.

“But that’s down the road, after it’s been cleaned up,” she said.