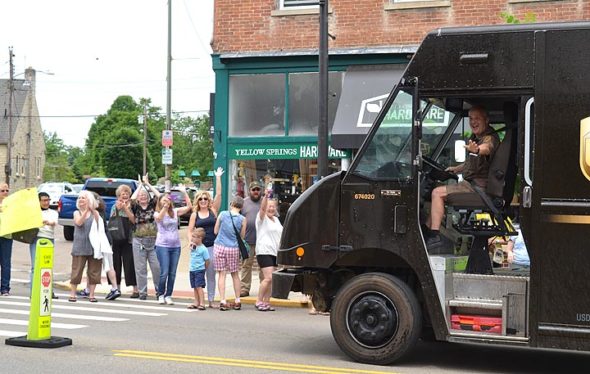 Rob Nangle, aka “Rob the UPS Man,” made one last ride through downtown Yellow Springs just after noon on May 29. (Photo by Audrey Hackett)

• Hundreds of revelers rung in 2019 at the local ball drop downtown. The event was MC’d by Dave Chappelle, who did a short interview broadcast live on CNN.

• YSHS special education teacher Donna Haller launched the Village Impact Project, or VIP, in January, a new mentoring program that connects local youth with adult villagers. Later in the year, a  board was in place at the nonprofit, which had arranged mentor-youth pairs and was regularly organizing gatherings.

• A polar vortex descended upon the village in late January, plunging temperatures to well below zero and delivering some of the coldest wind chills the town has seen in decades.

• The News once again earned the “Newspaper of Year” award at the annual Ohio News Media Association convention in Columbus in February. It was the ninth year in a row the News won the prize.

• Vickie Hennessy began a new recycling program in the village to collect #5 plastics, which are not accepted by the town’s solid waste provider Rumpke. The program will end at year’s end.

• The flu ramped up in the area in March, prompting the local high and middle school to close for a day.

• In a collaboration with YSHS teacher Kevin Lydy’s 10th grade U.S. History class, the News published a supplement, “Influential Women of Yellow Springs,” which featured student-written profiles of 16 local women. The students also produced banners on each woman, which were displayed downtown during the month of March.

• The YS Senior Center’s Dementia Friendly Yellow Springs project wrapped up in March after a year-and-a-half effort to raise awareness about the disease and offer resources for interacting with someone with dementia.

• A local solar co-op was launched here in the spring, as households interested in putting solar photovoltaic panels on their roofs banded together to save on costs. 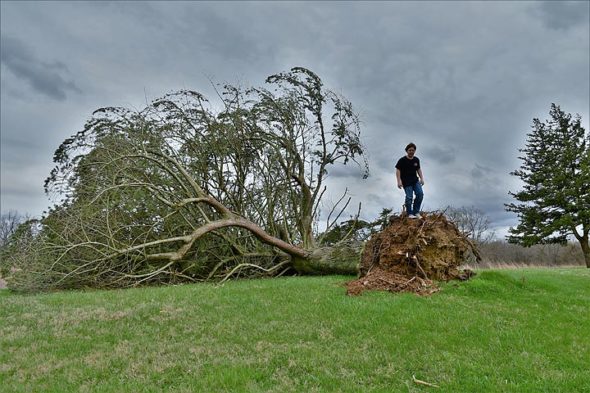 Evan Galarza stood atop a tree that uprooted on Hyde Road during powerful storm on April 12. (Photo by Kathleen Galarza)

• Straight-line winds ahead of a thunderstorm moved through the south side of town in April. Winds estimated at between 50 and 70 miles per hour uprooted and snapped trees and damaged a few barn roofs in the area.

• In April, Vectren began a major gas line fix in the village, which continued for the rest of the year.

• In a two-part series, the News covered the history of the 70s-era legendary, diverse social club, the Mystic Knights of Nowhere, and the human rights organization, H.U.M.A.N. The latter group is now being revived by a group of former and new members.

• After 26 years, “Rob the UPS man” ended his rounds in Yellow Springs with a final drive through town on May 29. A crowd of at least 100 downtown employees and villagers lined the streets to wave him off. 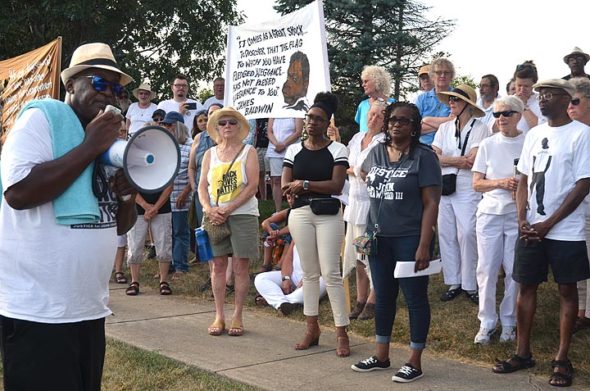 On Aug. 5, Bomani Moyenda addressed at least 100 people gathered outside the Beavercreek Walmart for a memorial on the fifth anniversary of John Crawford III’s shooting death at the store. (Photo by Audrey Hackett)

• In June, Tecumseh Land Trust commemorated the 20th anniversary of the Whitehall Farm auction. In addition to preserving 1,000 acres of farmland, the successful auction jumpstarted the local land trust.

• The News produced a series on invasive species threatening the local ecosystem and ways to eradicate them. Featured in “Invasive of the Month” articles were Amur honeysuckle, tree of heaven, burning bush, common privet, euonymous, Asian bittersweet, climbing vines and Japanese stiltgrass.

• The News profiled several area farmers who grow for the local food system, including Scott and Jillian Marshall, who raise beef cattle on West Jackson Road, Oasis Farms, an aquaculture farm hit by a tornado, and Heartbeat Farms CSA and its community-supported apothecary on Hustead Road.

• Tornado sirens wailed late in the evening of May 27 as villagers sought shelter from a possible incoming twister. Fierce winds, heavy rain and later, hail, ranging in size from mothballs to golf balls battered the village. The south side was struck the hardest, with many roofs needing repair or replacement.

• Villagers commemorated Juneteenth, a celebration of the emancipation of enslaved African Americans, at two local events, at Mills Park Hotel and at the First Bapttist Church.

• An estimated crowd of 5,000 people came for the annual Pride celebration. Hundreds took part in the parade through downtown. 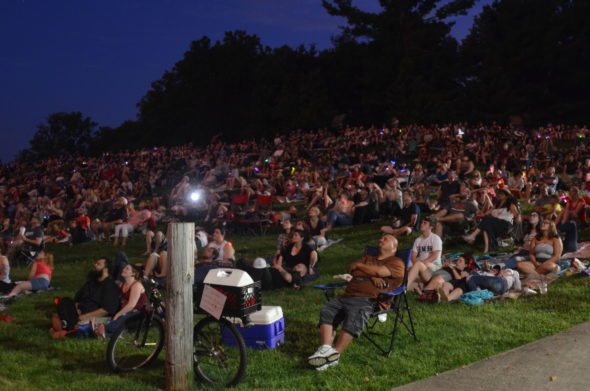 • An industrial-sized solar array slated for the rural area between Yellow Springs, Clifton and Cedarville divided neighbors, some of whom signed long-term leases with the solar company. Others started Citizens for Greene Acres to fight the solar project. Permit applications to build the 175-megawatt, 1,200 acre farm had not been submitted by years’ end.

• Local News reporter Lauren Heaton died in August from complications from heart surgery. She was 44. Heaton worked at the News as an associate editor, reporter, and columnist for 15 years, earning awards for her high-quality writing and photography. 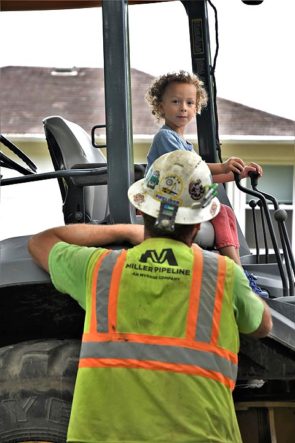 Kai Eyorokon-Miller, 3, was pondering his potential on the backhoe at the corner of Walnut and Dawson streets. (Photo by Kathleen Galarza)

• The News reported that stigma about drug addiction was contributing to the ongoing opioid crisis, with some progress made since the epidemic’s peak in 2017.

• The News profiled some local 4-H youth who participated in the 180th Greene County Fair in August.

• At least 100 people gathered at the Beavercreek Walmart for a memorial on the fifth anniversary of John Crawford III’s shooting death at the store, in an event organized by villager Yolanda Simpson and attended by many locals.

• The wonder of monarch butterflies — and the myriad threats faced by the species — was the focus of a September article.

• The Riding Centre celebrated 60 years in September. Director Carolyn Bailey, at the helm for the last 30 years, was honored, along with the centre’s founder Louise Soelberg.

• Peg Champney, the News’ longest-serving employee, died in November at age 87. Champney started at the News in production in 1951 and was most recently a part-time bookkeeper.