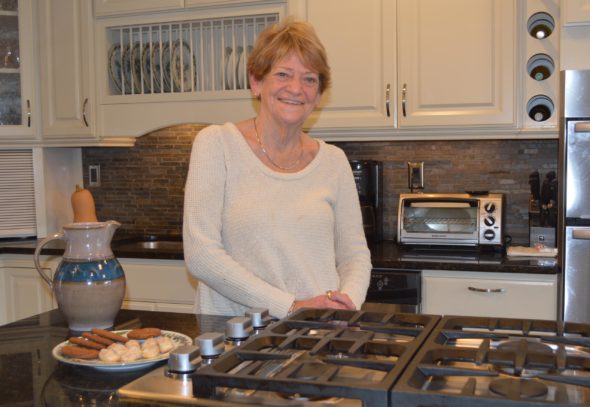 Local chef Sue Neff, aka Chef Neff, is returning soon to Harbour Island in the Bahamas, where she teaches at a trade school aimed at helping the resident population gain skills in the culinary arts to improve their job opportunities in the local tourist economy. Here is Neff in her home kitchen in Yellow Springs, where she lives about a third of the year. (Photo by Nora Jaara)

‘Chef Neff’ gives back by teaching

A tiny island in the Bahamas, most famous for its pink sand beaches, is now the site for a unique trade school that is helping its resident population gain job skills and garner higher wages.

And one villager is contributing her culinary expertise to the charitable effort.

Sue Neff, 81, is preparing to return to Harbour Island (pop. 1,762), this month to teach culinary arts at the Harbour Island Trade School, which also offers courses in electrical installation.

The course gives students basic skills for line work in a professional kitchen, where they can make more money than other jobs in the tourist trade, according to Neff.

“It’s allowing the students to enter the hospitality field with more than a low-end dishwashing job,” she said.

Neff added that the program is the first of its kind for the former British colony.

“There had never been any higher education offered on the island since its inception, and they so needed something like this,” Neff said. “There are not a lot of opportunities for [the residents] after high school.”

The trade school is a relatively new project of the One Eleuthera Foundation, a nonprofit based on the archipelago of Eleuthera, of which Harbour Island is a part. The first 12-week course, which provided training to 30 students, started in July 2019. Those students graduated in October, with the Archbishop of the Bahamas in attendance.

Training each student costs about $3,000, but students only have to pay $300 for the course. Donations from wealthy Americans, Canadians and Europeans with second homes on the island provide much of the funding for the program, according to Neff.

According to the One Eleuthera Foundation, lack of education and unemployment contribute to poverty on the island, where the majority of the population is Black. Youth unemployment is particularly high, according to the Bahamian government, reaching 30% in 2015. In addition, Neff said that the courses also serve Haitians, many of whom have immigrated to the Bahamas for a better life.

Neff oversees the baking portion of the training, while Katusia Johnson, a Bahamian, serves as the instructor for other cooking skills.

For Neff, who was born and raised in Meadville, Penn., cooking has been a passion since childhood. But she only began pursuing a culinary career after 35 years of working as a nurse.

“When I graduated from high school there was no path for a young woman to enter a culinary profession other than home economics,” Neff said. “Julia Childs had only recently begun her French culinary career.”

Neff received her nursing degree from St. John’s College in Cleveland and worked in a number of places, including Washington, D.C., Missouri, North Dakota, and Ohio. The family moved around because her husband, retired U.S. Air Force Colonel William Neff, was an aeronautical engineer in the Air Force.

Neff decided to finally pursue her lifelong dream of becoming a chef in 1995, a year after her husband died. All three of her children had graduated college by that time as well. She travelled to the United Kingdom to train at the Manor School of Fine Cuisine in Nottingham.

Neff opened a culinary school, The Trusty Servant, on McEwen Road in Centerville in 1996. After two years running the school, she received an opportunity that would lead her to the Bahamas.

In 1998, she accepted a job as a chef at the Coral Sands Hotel on Harbour Island. She worked at the hotel for five years before leaving to work as a private chef.

Neff, who moved to Yellow Springs in 2007, spends about four months out of the year in the village and the rest in the Bahamas, where she still works as a private chef.

Her role on the library board for the Sir George W.K. Roberts Library of Harbour Island introduced her to the culinary arts program.

The board began raising money to start the trade school after receiving seed money from a visiting American. As both a board member and a chef, Neff helped with the culinary arts course and volunteered to instruct. Getting the program up and running cost $70,000, which included the creation of a new kitchen.

The school has enough funding for the second course, which starts Jan. 15, but there will be another fundraising push for future courses in February. Those efforts will target people with second homes on the island.

The course will provide training to 10 students in the culinary arts and 12 in electrical installation, who will graduate in April.

“Further sessions are completely dependent on the generosity of donors.” Neff said. “Our funds are sufficient for this coming winter session only.”

The trade school hopes to offer more courses in the future, including plumbing, painting, tiling, carpentry and masonry, according to Neff.

Neff said that she was excited about being able to serve as an instructor at the school.

Although she got to know the community while working as a private chef over the years, Neff said she had to earn their trust and respect because they did not know her as a teacher yet.

“It’s been very serendipitous,” Neff said. “I was so pleased to be able to do it and so humbled.”

To donate to the program, visit the One Eleuthera Foundation at oneeleuthera.org and designate “FHITS” fund (which stands for Friends of Harbour Island Trade School).