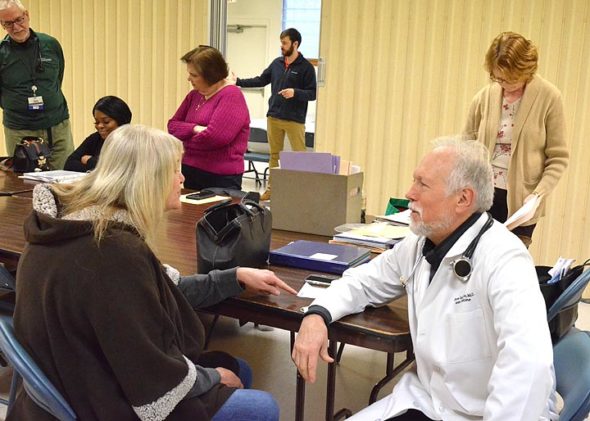 Reach Out Yellow Springs, a free medical clinic supported by donations, has been operating out of Central Chapel AME Church for a year. The local clinic saw 80 adults and 12 children in 2019, including patient Teresa Hager, pictured at left talking with volunteer physician Dr. Steve Bujenovic, one of numerous area medical professionals affiliated with the clinic. (Photo by Audrey Hackett)

With no health insurance and several serious chronic illnesses, Hager currently relies on the free medical clinic to help her treat and manage conditions including thyroid cancer, diabetes, COPD and rheumatoid arthritis. Her husband is employed but lacks health insurance; she formerly worked as an aide at Friends Care Center, until illness made employment too difficult.

“These people are the best. I wouldn’t be here if it weren’t for them,” Hager said  of Reach Out clinic staff.

She and her husband drove 45 minutes from their West Carrollton home last Tuesday to seek care at Reach Out Yellow Springs. Held Tuesday evenings from 4:30 p.m. to 6:30 p.m. in Central Chapel AME Church, the local clinic has been operating for a year. During that time, 80 adults and 12 children have been served, some multiple times, for a total of 150 visits over the course of the year, according to the nonprofit’s 2019 annual report.

Just under half of those seen had acute conditions, such as flu or bronchitis. Over half had chronic illnesses, the most common of which were high blood pressure and diabetes, according to nursing staff at last Tuesday’s clinic.

“What we see is really no different than other primary care practices,” clinic coordinator and registered nurse Tami Whalen said. “The difference is it’s free.”

Reach Out Yellow Springs was launched at Central Chapel in December 2018 as a satellite location of Reach Out Dayton, a longstanding medical nonprofit serving Montgomery County. The nonprofit suspended operations at its Dayton clinic for lack of funding last fall, leading some Dayton-area residents like the Hagers to seek care at the Yellow Springs satellite.

But most of the local clinic’s patients come from Greene County, with about half from Yellow Springs, according to Whalen, who has worked for Reach Out Dayton for nine years. Residents of Xenia and, more recently, Fairborn are also making use of the village clinic.

That may surprise some in Yellow Springs, who view the village as wealthier than other area communities. But while it’s true that median income is higher here — and an estimated 95% of villagers have some form of health insurance, a recent study shows — Yellow Springs is also home to significant numbers of uninsured or underinsured people of low income, according to retired physician Pamela von Matthiessen, who has volunteered at Reach Out since it opened.

“People think, ‘Oh, it’s an affluent community,’” she said. “But a lot of people who live and work here don’t have health insurance or have such a high deductible that they can’t afford care.”

Von Matthiessen recalled one patient from Yellow Springs whose father died young of colon cancer. Medical guidelines recommend that such a person be screened early and consistently for the disease. But the patient said, “How can I?” she recalled. Colonoscopies cost around $5,000, and the man didn’t have health insurance.

Alerted to his situation, Whalen was able to secure a free colonoscopy for him “within 15 minutes,” according to von Matthiessen, thanks to an established relationship with a local gastrointestinal practice that provides Reach Out with three free colonoscopies a month.

The man didn’t have polyps or cancer, which was a relief for all involved.

“It makes you sleep better at night to know,” von Matthiessen said.

Because Reach Out Dayton has been around for 25 years, the Yellow Springs clinic benefits from a wealth of established relationships with area hospitals and medical practices. Some provide free services; others do so on a sliding scale. And while Reach Out’s Dayton clinic had to close its doors in September, the nonprofit’s free pharmacy and physical therapy center, which are funded separately from the clinic, remain up and running.

For local patients, that means access to specialists for follow-up visits, as well as free or lower-cost medications.

“Our overarching theme has been to not say ‘no’ to patients,” Whalen said. “We provide options.”

As the clinic’s only paid employee, Whalen says she spends a lot of her time finding resources to help patients afford care. For example, even people who have health insurance often lack vision insurance, and may not be able to afford eye exams and eyeglasses. Whalen works with a nonprofit organization called Prevent Blindness to access free vision care for patients. These services are especially important for people with diabetes, which if untreated can damage the eyes and lead to blindness.

The health care system can be difficult to navigate, even for a professional, she acknowledged.

“It’s time-consuming and often confusing — and I do this all the time,” Whalen said.

According to Reach Out Yellow Springs’ annual report, lack of insurance is the primary reason patients cite for seeking care at the clinic. The majority of patients work at least part-time, but don’t have health insurance and earn slightly above the state guideline for Medicaid. Yet the monthly premium for insurance through the Affordable Care Act marketplace is too high.

That kind of scenario is one of many “gaps” Reach Out seeks to fill, according to Whalen.

Other gaps arise from patients having trouble locating a doctor who accepts their insurance, or one who is available to see new patients. And delays in new patient appointments at area practices can be up to eight weeks, leaving people without good options for handling pressing health concerns in the meantime, Whalen said.

Another common gap occurs when people covered through Medicaid move out of county or state. Under the federal program, they have to stop coverage and register from their new location, which can result in being without health insurance for up to three months, according to Whalen.

“A lot can happen in three months,” she said of untreated chronic conditions such as diabetes. Insulin can cost up to $800 per month, unaffordable for nearly everyone, she added.

Immigrants who are legal permanent residents are in a different bind. Those who can’t afford insurance through the marketplace must wait until they have lived in the U.S. for five years before being eligible to enroll in Medicaid and other government programs, according to Whalen.

Reach Out Yellow Springs got off the ground in late 2018. The clinic’s impetus was a proposed 54-unit senior affordable housing rental development in Yellow Springs, a joint project of Home, Inc. and St. Mary Development Corporation of Dayton. In order to be eligible for federal tax credit funding, that $10.5 million affordable housing project is required to be located near a medical clinic for the underserved, according to Home, Inc. board member Kevin McGruder.

Home, Inc., working with Village leaders including Council member Lisa Kreeger, approached Reach Out Dayton and helped bring a clinic here. As part of that effort, Reach Out conducted a community health needs assessment of Yellow Springs, which showed some unmet health needs, especially among seniors and youth.

While the senior apartment project was turned down for tax credit funding last year, Home, Inc. and St. Mary are seeking funding again this year.

And the free clinic, according to McGruder and others, is filling a real need in the community, with organizers considering adding a second evening to the clinic’s schedule to accommodate more patients. Currently, up to eight people come to the clinic on Tuesdays, some on a drop-in basis and others by appointment.

“We started slow, but as word is getting out, we’re getting a steady response,” he said, adding that word-of-mouth has been the primary driver of clinic visits.

Central Chapel AME Church, located at 411 S. High St., was chosen as the clinic site partly because of McGruder’s connection as a church trustee. To McGruder, the church has a role to play in helping members of the community become “healthy and healed.”

“If you look at the Bible as a text, a lot of the miracles are about healing,” he said.

“We knew there was a need, and we were happy to provide space,” McGruder added.

Despite the church setting, the clinic is not religiously affiliated. Central Chapel donates the use of its education and family life center to the clinic each week, allowing Reach Out Yellow Springs to operate without the burden of rent or utility expenses.

“Church staff have been so incredibly gracious and supportive,” clinic coordinator Whalen said. “We couldn’t do it without them.”

The Yellow Springs clinic relies on the volunteer services of up to eight professionals each week, including two physicians, two medical students from Wright State University’s Boonshoft School of Medicine, two nurses or medical technicians and a social services coordinator from St. Mary. Pharmacy students and faculty from Cedarville University also assist with medication education.

At last Tuesday’s clinic, the volunteer physicians were Yellow Springs resident Dr. Steve Bujenovic — known to patients as “Dr. B.” — and Dr. John Lyman, a former villager who was filling in for von Matthiessen.

Reach Out Yellow Springs’ 2019 annual report estimates that volunteers supplied an equivalent in $13,427 in labor last year. That’s in addition to $48,410 in free medication supplied through the Reach Out pharmacy, which receives donations from a variety of area hospitals and charities. The clinic’s expense budget was around $3,000, an amount that includes Whalen’s pay as clinic coordinator and medical supply costs. All money to support the local clinic comes through donations.

“We are always free to patients, and we rely 100% on donations,” Whalen said.

The clinic currently is looking to acquire an ophthalmoscope, a device that looks inside the eye to help evaluate eye health. The cost of that device is up to $1,500, according to Whalen.

Those who wish to donate to the clinic can do so by mailing checks to Reach Out  Yellow Springs, 25 E. Foraker St., Dayton, OH 45409, or by dropping donations by on a Tuesday evening.

“People like me really benefit — and there are a lot of people like me,” patient Teresa Hagen said of support for the clinic.

And last Tuesday evening provided another example of that benefit.

Hagen was there with her husband, waiting as he saw a doctor to address his “sky high” blood pressure. But she was also fighting a bad cough, potentially dangerous for someone with COPD and emphysema. As she spoke with this reporter, Bujenovic — Dr. B. — overheard.

“Nick, why don’t you take her back,” he said to one of the Boonshoft medical students. “Let’s listen to her lungs.”