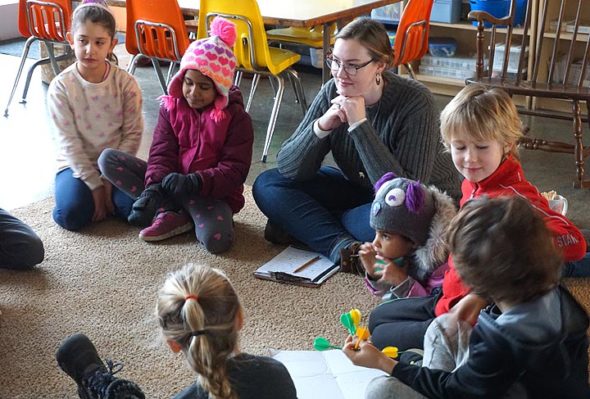 The Younger Group class at The Antioch School begins each day with a morning meeting. Elaina Vimmerstedt, a 2016 graduate of Wittenberg Unviersity, became the class’s new teacher at the beginning of the school year. Vimmerstedt, center, is flanked, from left, by Isabella Rion, Dhyana Kuppuswamy, Elisa Jones and Isaac Royer-Miller. (Photo by Carol Simmons)

With the first half of the academic year under her belt, the Antioch School’s new Younger Group teacher delights in the daily life of the 98-year-old independent elementary school off Corry Street.

Sitting down in one of her classroom’s child-sized orange plastic chairs earlier this month, a mug of tea in hand after seeing her students off at the end of a full day, Elaina Vimmerstedt said she’s found an educational model at The Antioch School that matches her own ideals.

Foremost for the 2016 Wittenberg University graduate is letting “children be children,” facilitating their learning primarily through self-directed exploration and play.

“I was looking for somewhere children had more opportunity to be free and explore and be outside and connect with each other,” she said.

Although Vimmerstedt entered college “pretty sure” she wanted to go into teaching, specifically working with younger children, she said her subsequent training experiences in more traditional area schools left her wondering if her imagined educational setting existed.

“I was feeling like I didn’t really have a place where I was called to be,” she said.

With an extensive vocal music background, she focused her college studies on elementary music education, voice and choir, but she also carried experience and interest in outdoor education.

Her dual interests of music and outdoor education were fostered in her youth growing up in the Grandview Heights suburb of Columbus, where she took private voice lessons and sang with the Columbus Children’s Choir.

“I’d say that’s where I grew up the most in music,” she said of the citywide youth choir. “It teaches so much — community, working together, blending personalities and voices” — all lessons with wider life applications, she noted.

Students at Grandview Heights High School could serve as teaching assistants during their study hall periods, and Vimmerstedt went to music classrooms in the elementary and middle schools.

“I really enjoyed working with the younger students,” she recalled.

The school district also had an outdoor education program in which fifth and sixth graders attended week-long, grade-specific summer camps, where high school juniors and seniors served as counselors.

The counselor training included weekend classes during which the high schoolers learned a little about child development in addition to camp specifics.

“I went to the fifth-grade camp both junior and senior year and led stream studies and plaster blob art,” Vimmerstedt said.

That background helped lead her to Glen Helen’s Outdoor Education Center, where she was hired as a naturalist upon her graduation from Wittenberg.

She eventually became the lead naturalist and program coordinator for the outdoor school.

Learning of The Antioch School, she arranged to visit and was inspired by what she saw. Soon after, she applied for and was hired as the assistant teacher in the Older Group classroom, taught by Sally Dennis, for the 2018–19 school year. She also saved as an artist-in-residence for the second half of the school year, teaching music in all classes of the school. The work included teaching the songs for the spring musical (“The Lion King,” performed last May at the Clifton Opera House), she said.

“After I started working here, I was so intrigued by the philosophy and the methods and the pedagogy and how it works every day,” Vimmerstedt said.

She said that working as the Older Group class assistant affected her profoundly.

“I envisioned taking (The Antioch School) philosophy with me in my career,” wherever it went.

Serendipitously for Vimmerstedt, that journey would be taking her to the next classroom down the hall.

The Younger Group teacher position opened at the conclusion of the academic year last spring, when Cathleen Tong and the school separated after Tong’s first year. Tong returned this past fall to the Dayton Public Montessori school where she taught for seven years before joining The Antioch School staff.

Antioch School Manager Nathan Summers said this week that Vimmerstedt “has been a wonderful addition to our school,” describing her work with students as patient and caring.

“Elaina’s curiosity, patience, positivity, mindfulness and respect for childhood make her a perfect fit for our child-centered approach to education,” Summers said.

For her part, the young teacher feels she is in the right place.

“When I think about my course in life, everything just led, really dovetailed off the last thing,” Vimmerstedt reflected.

“Things just flowed in a way really genuine to who I was.”

Having already worked for a year at the school eased the transition for her, the students, their families and the school staff. But her familiarity with students and teachers began with her time at the Glen, she said.

Teaching at the Antioch School is a realization of the aspirations Vimmerstedt holds for childhood education.

“It’s enlightening to teach in an environment that allows children to be children. We don’t ask them to be memorizers or to be perfect, but to be who they are. That’s where the learning starts here.”

Every day in the Younger Group classroom officially begins and ends with the class sitting together on a large piece of carpet in the middle of the room.

The multi-age class currently numbers 15 students who typically would be in first, second or third grade.

The Antioch School focuses less on grade level, however, and more on age, Vimmerstedt notes.

“It’s flexible — it really depends on the child,” she said of class placement and work. “That’s a conversation we have with families, and the children have a lot of say.”

Students enter the classroom and find an activity — reading, drawing, block building — until Vimmerstedt calls them together for morning meeting.

Sitting in a circle, the meeting begins with a sharing period, when each student gets a chance to speak, monitored by a designated timekeeper using a large sand timer.

“They like to make each other laugh,” Vimmerstedt said of the sharing time. “Sometimes we’ll have comedy hour during morning meeting.”

After sharing, Vimmerstedt — “Elaina” to her students — lays out the schedule for the day and answers questions.

A typical day includes a “dear” — drop everything and read — time, when students do independent reading and Vimmerstedt and classroom assistant MJ Richlen, who retired two years ago as school manager, work with individual emerging readers on early literacy skills.

“There are also math and science/art rotations,” she said, when some students stay in the classroom for math work while others go to the science/art room.

“They are very busy at free time,” Vimmerstedt said. “Writing a comic, building a block structure in the hallway, playing outside, riding trikes, singing, playing guitar.”

And then there is project time.

“That time is really for them to be creative and make something that’s meaningful to them.”

The day ends back on the carpet for read aloud time. She’s currently reading “Wind in the Willows” to the class. Some of Vimmerstedt’s favorites for this age group are books by Roald Dahl and A.E. Milne’s Winnie the Pooh series.

“And if we have time, we sing. That’s the cherry on top.”

Some of the students’ favorite songs include “Brass Goggles,” by a California-based steam punk band called Steam Powered Giraffe; “The Riddle Song,” an old folk song that dates back to about 1785; and Woody Guthrie’s “Deportee,” an immigrant rights song.

“There was a time they wanted to sing that every single day,” Vimmerstedt said.

“It’s really important to me to teach traditional and folk songs, because a lot of that is being lost.”

Classroom rules — “agreements” — were formed at the beginning of the year.

“We made the agreements together,” Vimmerstedt said. “The children said what they need to feel safe and comfortable in school. My work was to connect the things that were similar and make sure everyone’s thought was represented.”

Vimmerstedt said the process was important not only in establishing the classroom guidelines, but also in modeling the school’s philosophy.

“It’s so important for them to have created them,” she said of the agreements. “Everything we do here at school relies on the children’s input. We really rely on the children buying into the process we use. … They have so much more ownership over these decisions. It’s really empowering for them.”

The process also set the foundation for Vimmerstedt’s goals as the classroom teacher.

“One of the most important things for me starting this school year was connecting with the children, building trust between one another, helping the children trust each other,” she said.

“The work can’t happen without the umbrella of having confidence in each other.”

Now, after nearly five months together, “we’re starting to see the fruits of those seeds coming forth,” Vimmerstedt said.

“There’s a sense of family that we have in the way we care about each other and the way we disagree,” she noted.

“And their endurance is a lot higher for all kinds of adversity,” including increased and more difficult academic work.

“They have the capacity to do so much more work at this point in the year than we did at the beginning,” Vimmerstedt said.

And while she is pleased to see the academic progress, she especially prizes a sense of personal value and growth among her students.

“Fundamentally, I really want every child every single day, to feel validated, feel seen. I hope that they feel understood. I hope there is space and time for their feelings and their personalities.

“It’s very important to me that each child feels appreciated, that school is a place where they can be themselves and feel successful and confident. I hope that they feel that they are important, and the people in their lives at school know who they are.”