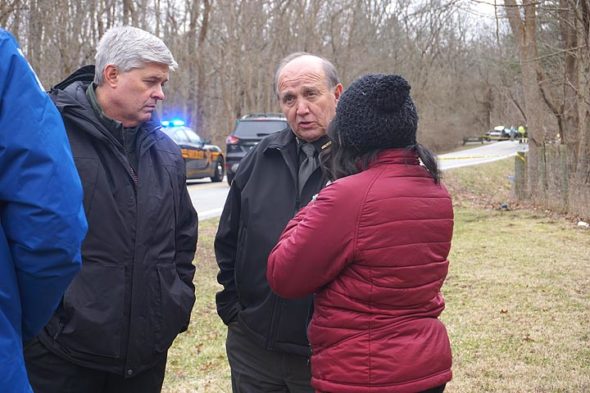 Greene County Coroner Kevin Sharrett, left, and Sheriff Gene Fischer spoke to reporters Wednesday, Feb. 12, near the scene of a fatal double shooting in the 3400 block of Grinnell Road. (Photo by Carol Simmons)

2 dead in shooting on Grinnell Road

The victims were not identified pending notification of next of kin.

Speaking to reporters at the scene, Greene County Coroner Kevin Sharrett declined to give details about the victims’ gender or age, but confirmed their deaths appeared to be from gun shots.

According to Greene County Sheriff Gene Fischer, the shooting occurred after 11 a.m. outside the gate of the driveway to a private home. Online records list the address, which is across the road from the former Camp Greene, as 3443 Grinnell Road. He added that the two current residents of the house, which was listed for sale this past year, were “alive and well” and speaking with sheriff’s deputies.

The sheriff’s office was notified of a “shoot-out” by one of the residents at about 11:15 a.m., Fischer told reporters Wednesday. The shooting “was going on when we got the phone call,” he told the News in a followup interview. He declined to say whether there was any connection between the victims and the residents.

Fischer told reporters that three guns and a number of shell casings were found near the bodies. Coroner Sharrett said the victims were transported to the Miami Valley Regional Crime Lab in Dayton, where autopsies will be conducted.

County officials also have called in the Ohio Bureau of Crime Investigation to help in the investigation, which Fischer said could take some time.

Fischer said he couldn’t characterize the nature of the shooting.

“We don’t know yet if it’s a domestic [situation] or whatever,” he said.

He assured local residents, however, that they need not fear a shooter on the loose.

“From what we’ve seen, we don’t have any concern for [the safety of] people in the area,” Fischer said.

The 3400 block of Grinnell Road will likely remain closed to traffic through the end of the day, the sheriff said.