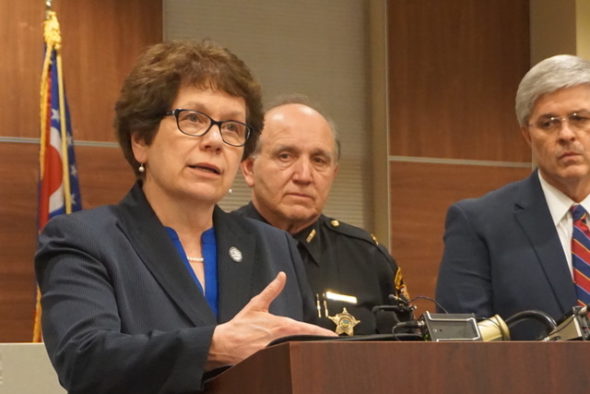 The two people killed in a shooting outside a private home on Grinnell Road on Wednesday, Feb. 12, have been identified as the resident’s ex-wife, Cheryl Sanders, 59, and her husband, Robert R. Sanders, 56, Greene County Sheriff Gene Fischer announced in a press conference Thursday afternoon.

A preliminary autopsy of the couple Thursday morning confirmed that they both died of multiple gun shot wounds, Greene County Coroner Kevin Sharrett said during the 30-minute press conference at the Xenia city building in downtown Xenia.

Sheriff Fischer described the fatal altercation as an attempted “ambush” of Cheryl Sanders’ former husband and his current wife, both of whom he declined to name.

According to authorities, the incident occurred shortly after 11 a.m. outside the driveway gate at 3443 Grinnell Road, where the ex-husband and his wife live.

Fischer said the resident couple told sheriff’s deputies that “they were confronted … by a man with a gun” as they pulled into their driveway late Wednesday morning after going out. The female resident was driving, and the male resident was in the passenger seat, according to their statements.

The couple said the man, Robert Sanders, “threatened to kill them,” prompting the male resident, whom the sheriff said has a conceal carry license and was armed, to “exit the car with [his] gun.” After a loud verbal exchange, reportedly heard by nearby neighbors, “a shoot-out occurred,” Fischer said.

Cheryl Sanders then reportedly pulled up in a car, got out with a gun and exchanged gunfire with her former husband as well.

While the Sanders received mortal wounds, the ex-husband was unharmed, the sheriff said.

Fischer said the altercation looked to have been planned. The Sanders, who most recently were living in North Carolina, were driving a car with counterfeit temporary Ohio tags, and Robert Sanders was carrying multiple forms of identification, the sheriff said. In addition, deputies found a pair of cameras set up on a stump near the entrance to Camp Greene that appeared to be providing live images of the house across the road to a cell phone found in the Sanders’ car.

Although authorities think they have an understanding of what happened, the investigation will continue for at least several weeks, according to Fischer and Greene County First Assistant Prosecutor Suzanne Schmidt, who also attended the press conference Thursday.

Coroner Sharrett said results from the full autopsies could take up to six weeks.

The sheriff’s office and the Ohio Bureau of Investigation, which was called in early Wednesday afternoon, will be working to determine the number of shots fired and where they originated.

Investigators reported retrieving three guns and a number of shell casings at the scene. BCI also is looking into communication and contact history between the couples.

Fischer did not know when the former spouses divorced, but he said they have two daughters who are currently attending college.

He also said that the ex-husband had contacted the sheriff’s office five years ago to report that his former wife was trying to hire someone to kill him.

As part of their investigation, the sheriff’s office also has requested warrants for the two cars — the Sanders’ and the Grinnell Road residents’ — and the house. Fischer noted that there may be security footage from the house that captured images of the shooting. A security camera mounted on the property fence, however, was not turned on, he said.

First Assistant Prosecutor Schmidt said that the prosecutor’s office would wait until the investigation was complete before determining whether there would be any charges brought against the ex-husband.

The News’ previous coverage of the incident is here.