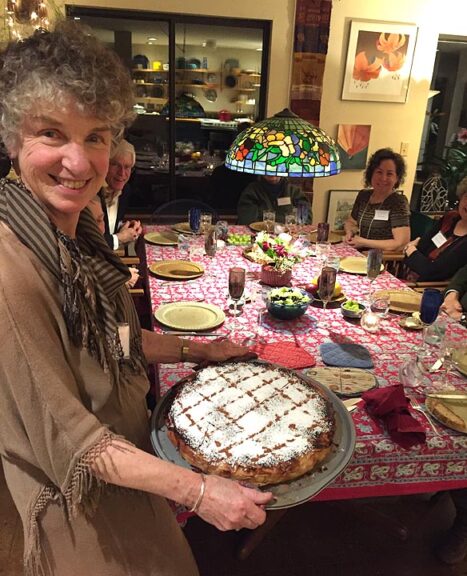 Evelyn, shown above, and Tom LaMers have served as hosts for the Feast For Friends, the Friends Care Community’s annual progressive dinner, for the past 27 years, and will host again this year. Shown above preparing to eat a Moroccan chicken pie are, rear left, Bruce Heckman, and rear right, Terry Graham, along with other unidentified guests. Openings are still available for this year’s event, which takes place Saturday, March 14. To RSVP, contact Becky Baker at Friends Care Community, 937-767-7363.

30 years of Feast for Friends

On March 14, Evelyn and Tom LaMers will be doing the same thing they’ve been doing the second Saturday of March for the past 27 years — hosting a dinner as part of the Feast for Friends, the Friends Care Community annual  progressive dinner.

“We love to do it, and haven’t missed one since we started,” Evelyn said in an interview this week. “We plan our vacation around it.”

Each year the LaMers prepare a bastilla, which is a Moroccan chicken pie, along with a variety of salads for their guests. Preparations take about two days, but the couple enjoys the cooking. They also take satisfaction in supporting Friends Care, the local continuing care community.

And just as important as contributing to a good cause, Evelyn and Tom know the event will be a place not only to renew old friendships, but to meet people they didn’t know before.

This year marks the 30th anniversary of the Feast for Friends, and organizers plan to provide a good time for those who attend.

“We plan to make it extra special,” according to Kathy Reed, an FCC board member who heads up the committee organizing the event.

Everyone is invited to attend, and spaces remain open. The cost is $85 per person, of which $75 is tax-deductible. To make a reservation, contact Becky Baker at Friends Care Community, 937-767-7363. Deadline for RSVPs is March 1.

The evening begins at 6 p.m. Saturday, March 14, with wine and appetizers at the Friends Care dining room. A pianist will be playing, a photo booth will be available, and those interested may purchase raffle tickets for  a chef-cooked dinner at home, an overnight stay at the Mills Park Hotel, a subscription to Chamber Music Yellow Springs or several pieces of art.

At this part of the evening, participants will be introduced to their dinner companions, and learn in whose home they’ll be having dinner. Dinner takes place at 7:15, followed by dessert back at Friends Care.

Along with the LaMers, others who have hosted for years and will do so again include Tim and Kosuko Heaton, Macy and Roger Reynolds, Mary Kay Smith and Melissa Heston, Sandy McHugh and Jerry Sutton and Carol and Bruce Bradtmiller.

The Feast for Friends is the nonprofit’s biggest annual fundraiser, bringing in about $8,000 a year, according to FCC Executive Director Mike Montgomery. The extra funds allow the center to provide amenities that FCC residents might not otherwise have, he said. This year, the proceeds will go toward a new van to replace the current, aging vehicle.

“This event helps us go above and beyond what’s in our budget for residents,” he said.

Friends Care opened its doors 40 years ago, the culmination of community-wide fundraising led by local Quakers. Since then, the original nursing home has been expanded, and assisted living, independent living and a rehabilitation facility have been added. Currently, the nonprofit is the only facility in Greene County with a five-star rating, the highest rating provided by the Center for Medicaid/Medicare, based on resident care and staffing levels, according to Montgomery.

One villager who is looking forward to  this year’s Feast for Friends is Char Schiff, who originated the first progressive dinner 30 years ago, when she was an FCC board member. Over the years the event has benefited from not only Schiff’s leadership, but that of a number of strong organizers, including Joan Horn, Pegeen Laughlin and Beth Rubin, according to Reed.

Friends Care leaders and staff are grateful for the strong local support, according to Executive Director Montgomery.

“We’re not just seen as a nursing home, we’re seen as a big part of the community,” he said.

*Chiddister is a board member of Friends Care Community and the former editor of the News.

The Senior Center announced on Oct. 16 that it would halt its reopening, planned for Monday, Oct. 19, due to the elevation of Greene County to level 3, or “red,” by the Ohio Public Health Advisory System.