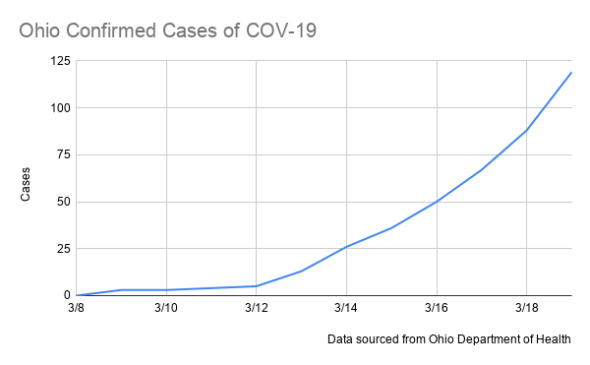 Ohio's confirmed cases of COVID-19 has risen from its first three cases on March 9, 2020, to 119 cases on March 19. "On the epidemic curve, we are on the upsweep," Ohio Department of Health Director Amy Acton said.

“Young people are getting ill. You have to take this seriously and you have to help us stop spreading this virus.”  — Dr. Amy Acton

During the Ohio governor’s daily briefing, state leaders directly addressed those who are not taking seriously advice to stay home and away from other people as coronavirus infections ramp up in Ohio.

“Each one of us is making those sacrifices,” DeWine said. “Just like in a war, we have to pull together and ultimately it’s going to be these small acts … that make a difference in the world.”

For those who are returning from travel, DeWine said they should self-isolate to and monitor their health to look for symptoms.

“If you’ve been traveling, please stay in your home,” he said. “Please make sure you’re not in contact with people outside your family that live in that home. That’s the most prudent thing to do.”

Ohio Department of Health Director Amy Acton echoed the governor’s sentiment, imploring young people, “take this seriously.” Acton shared that the latest Ohio data shows that the average age of confirmed cases is now 49 years old. In addition, 38% of all hospitalizations for the virus are for those under 65 years old.

“When we say it is more deadly the older you get, that does not mean that someone who gets this at a younger age is going to have an easy time at all,” DeWine later said.

“This spares no one,” DeWine added.

As of March 19, Ohio has 119 confirmed cases of COVID-19 in 24 counties, including the nearby counties of Montgomery and Miami, which each have one case. That figure includes 33 hospitalizations. The onset of symptoms of those 119 individuals ranges from Feb. 7 to March 18.

Also appearing at today’s briefing was Ohio Supreme Court Chief Justice Maureen O’Connor, who shared guidance with county judges to reduce jail populations and delay hearings that are not time-sensitive, while conducting other hearings remotely. O’Connor also advised judges to temporarily stay foreclosure proceedings. She said shutting down the courts entirely, however, is not an option.

“The total closure of the courts presents an access to justice issue,” O’Connor said. She added that the courts would be “limiting but not eliminating access” to the public.

Regarding the danger of infection in jails, O’Connor advised county judges to lower bonds and use summons to lower jail populations, and to consider releasing “incarcerated individuals who are in a high-risk category for those with the virus.” First, jails should do an assessment of their populations. The benefits of such a move are twofold, she said.

“One is to safeguard the folks who are in jail, and also to offer the individual the chance to be isolated outside of the jail environment,” O’Connor said.

“The judges should review their bail and the circumstances by which they have people detained in the jails and prioritize releases based upon that,” she added.

In response to a question from a reporter, O’Connor said that due to the nature of the Ohio judiciary, the state supreme court does not have the authority to impose such policies on local courts, only to recommend them.

In other news, DeWine said the state was moving to close “illegal internet cafes.” He reminded the public that the Public Utilities Commission of Ohio issued a moratorium on electric and gas disconnections through May 1.

DeWine also took the time to share with residents that the “grocery supply chain is strong” in Ohio.

“You don’t have to fear that the food will run out at the grocery store,” he said.

The director of the Ohio Department of Medicaid announced that that agency was looking at increasing it use of “tele-health” during the crisis to “take pressure off of our emergency rooms and hospitals” as well as to protect health care practitioners and patients.