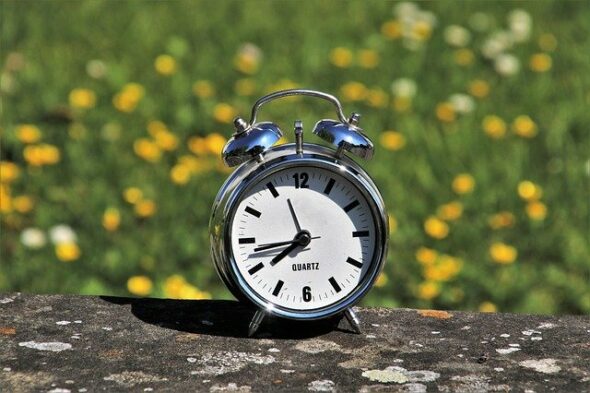 Daylight Saving Time, which begins Sunday, March 8, has a long and strangely insect-involved history. (Image by pasja1000 from Pixabay)

Most of the continental United States will spend a bleary-eyed morning this coming Sunday, March 8, as Daylight Saving Time returns, requiring all villagers to set their clocks one hour ahead — and potentially get to bed an hour earlier — on Saturday night.

The concept of something like Daylight Saving Time, or DST — adjusting the clock to borrow sunlight from one part of the day and give it to another — dates back at least to the era of the Founding Fathers. Benjamin Franklin, in his 1784 essay to The Journal of Paris, “An Economical Project,” suggested that the clocks follow the sun, allowing citizens to always wake to sunrise, thus saving on the expense of candles. He wrote: “Every morning, as soon as the sun rises, let all the bells in every church be set ringing; and if that is not sufficient, let cannon be fired in every street, to wake the sluggards effectually, and make them open their eyes to see their true interest.”

Though even a cursory read of Franklin’s piece reveals him to have been joking, the New Zealand astronomer and entomologist George Hudson, widely credited as the progenitor of DST, was entirely serious when he suggested a two-hour time shift in 1895 in a report to the Wellington Philosophical Society. Hudson just wanted a few extra hours of light in the evening to go looking for bugs.

Ten years after Hudson’s proposal, Britain’s William Willett independently suggested the notion himself, dismayed that so many London citizens seemed to waste the early summer sun by sleeping through it. Rather than Hudson’s bugs, Willett dreamed of longer evenings during which to golf. He lobbied for a summertime change until 1915, dying that year, just a few years shy of seeing Britain adopt the change during World War I.

As for Hudson: he was eventually honored by the Royal Society of New Zealand after the passing of the Summer-Time Act, the New Zealand equivalent of DST, in 1927.

Like Hudson and Willett, the United States has taken DST seriously — sometimes. It was first officially adopted in the United States in 1918 during the first World War, along with Britain and other European nations. At war’s end, the unpopularity of the time change pushed Congress to abolish the Standard Time Act, which had originally established DST. President Franklin D. Roosevelt re-established the practice — which he called “War Time” — during World War II. When that war ended, what followed was a truly confusing couple of decades, in which individual municipalities could choose whether or not to observe the time shift. Finally, in 1966, the Uniform Time Act brought all of the United States under the practice of DST.

Well, not Hawaii. Or Arizona — except for the Diné, who observe DST on tribal lands in that state. Or U.S. territories Puerto Rico, the Virgin Islands, American Samoa, Guam and the Northern Mariana Islands.

As of 2007, DST begins each year at 2 a.m. on the second Sunday in March, and ends on the first Sunday in November. The practice, adopted by more than 70 countries, “borrows” an hour of daylight from the morning and pushes it into the evening, so that the Hudsons and Willetts of the world can enjoy more evening sunlight, and the Franklins of the world can save a little cash on artificial lighting at night. One modern facet of Daylight Saving Time which perhaps none of DST’s forebears foresaw was its effect on the daily commute: Daylight Saving Time is purported to decrease the number of road accidents that would otherwise occur in evenings by offering more light during high-traffic hours.

Despite these seeming benefits, the majority of Americans seem bewildered, and even belligerent, about the coming of DST — a 2014 Rasmussen Report surveying 1,000 Americans found that 43% didn’t see the point in the time shift.

This, despite the fact that DST constitutes two thirds of the year, making it, technically, the norm. According to Slate’s Mark Joseph Stern, it’s actually Standard Time — that time of year when we trade an extra hour of sleep for several months of darker nights — that should get the axe.

Wherever you land on the issue, don’t forget to set your clock forward this weekend before 2 a.m. on Sunday, March 8, lest you arrive late for your Sunday functions.