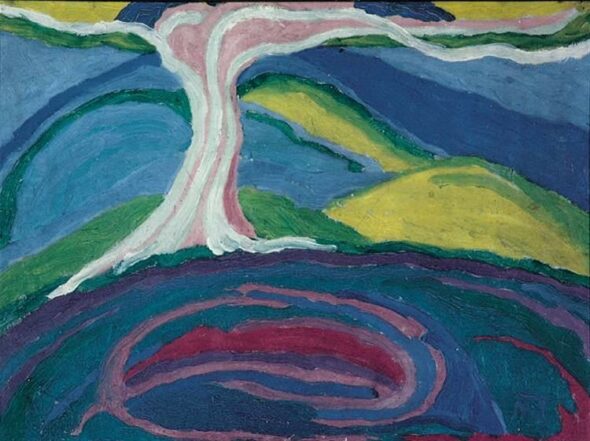 A warm sun appeared late in the day Monday. Grass was greening, vernal pools rising in swales and low patches. Daffodils were opening their secret rooms. Spring, spring, was the whisper just forming on buds — the tongues of the season.

Were you indoors? Did you miss it?

I spoke to local artist and poet Robert Paschell by phone on Sunday. “We’ve been robbed of our spring,” he lamented.

But as we talked, other perspectives emerged. No longer selling his popular, punning t-shirts downtown because of the coronavirus, Robert was at home, alone, “doing almost nothing but writing.” The poetry of spring was gushing forth — the poetry of eternal spring, and the poetry of this strange spring, virus-tossed, virus-laced.

Robert composed a poem as we spoke, then read it back to me. I scribbled down a few lines. “Death by a thousand closures.” And, imagining the glaciation of a new Ice Age: “The first megafauna to reappear were the woolly mammoths of worry.” The title, we decided together, would be “The Ice-olation Age.”

Everybody who’s spent any time in downtown Yellow Springs knows Robert Paschell. A prolific poet since the age of 10, he doesn’t just versify. He memorizes. And he recites. Encounter Robert — who, not so incidentally, is named after Robert Burns, the bard of Scotland — and you may be handed a seven-page playlist of original poem titles. “Pick one,” he’ll urge. You will, at random, beguiled by a dozen titles at once. He’ll speak the poem, with emotion and delicious elocution. And he’ll look at you — really look at you.

The poetry will enter your soul through that gaze, as much as by words.

Dear villagers, this is a frightening time. But it is also an ordinary time. It’s spring! A virus moves among us, a particle of lethal stealth. The virus is new, but illness and death are not. Death, dance partner to life, is always with us. A poet, a seer, might feel drawn to this reality. A poet is a hunter of the hidden truths, a mover in the inverted realms.

“Artistically, the more an artist works to explore polarities, the deeper their art will be,” Robert told me on Sunday. We paused, silence swelling like a vernal pool.

What is true of artists is true of all of us. The more experience we let in, dark and light, the more our lives will open and deepen. Death and fear and grief don’t have to rob us of life — of spring. They can bring us life, bring us to life. By lodging us in the eternal and mysterious life-death, where we already are.

And now, with the last and best words, this month’s poem by villager Robert Paschell:

Everyone went to work,
and I walked down the subway stairs
to an underground river of poetry.

Everyone put on suits and ties,
and I stood on a beach and watched
wild horses climb out of the waves.

Everyone upgraded their computer screens,
and I watched the moon light up clouds,
and whisper sweet nothings
into the curving vault of sky.

Everyone ate their 401 Special K breakfasts,
and I saw a snapdragons put on a satin hoodie
and stand outside in the rain.

*This column originally appeared in the March 26 issue of the News. To read other First Lines poetry columns, visit the archive page here.