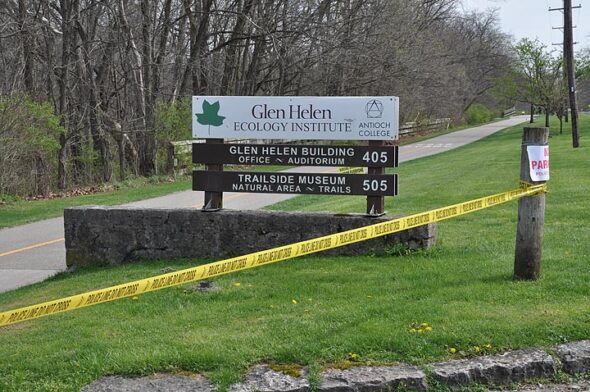 College and Glen leaders are pondering that question in light of recent furloughs, hour reductions and salary cuts at the college. The Glen, a significant asset to the college and community, presents unique challenges during the coronavirus crisis, which has forced the closure of the Glen and the suspension of its programs for an indefinite period of time.

“This is a really uncertain time for the college and the Glen,” Antioch College Trustee Sharen Neuhardt, a lawyer who lives in Yellow Springs, said this week. “We’re trying our best.”

As reported by the News last week, eight Glen employees were furloughed on April 3 and three had their hours reduced to half time as part of Antioch’s collegewide payroll reduction in response to the COVID-19 crisis.

With the Glen closed, the college couldn’t support the employees, Neuhardt said.

But trustees of Glen Helen Association, or GHA, the Glen’s nonprofit friends group, are worried about a loss of leadership and continuity during the indefinite period of the pandemic. Following the furloughs, GHA stepped forward with funds to partially restore five of the eight furloughed Glen employees. As of this week, the positions have been restored on a limited basis through the college’s fiscal year, which ends on June 30.

“We were able to work with the college,” GHA President Bethany Gray said this week.

Partially restored positions include the Glen’s executive director, finance director, Outdoor Education Center (OEC) director and two OEC staff members. The positions are being funded by GHA for five to 20 hours weekly, depending on the position.

Three other Glen positions were cut to half time by the college. These include the Raptor Center director, Glen Helen ranger and property manager. A total of 11 college employees work at the Glen.

While Glen Helen remains closed to the public, and school programs are canceled through the rest of the year, GHA hopes that its partial staff support will allow the Glen to put some programs in place for the coming school year, however that year takes shape.

What happens after the fiscal year ends in two months is uncertain, however, though GHA President Gray said the friends association would step forward with as much support as it could muster.

“We hope to provide support to the best of our ability,” she said.

Staff support is one of the ways in which the 60-year-old friends association has “stepped up” in recent years in response to growing financial pressures at the college, according to GHA trustee Scott Geisel.

“Like all small liberal arts colleges, Antioch has to focus on its core mission. GHA has stepped up — but now, because of the coronavirus, we are stretched to the limit,” he said.

But college trustee Neuhardt offered a somewhat different perspective this week. While acknowledging that GHA has provided significant support for the Glen in recent years, she contended that even with GHA support, Antioch has had to subsidize the Glen, and has been struggling with the burden of doing so, especially now.

“The college provides a park to the public. It’s a burden that in these times is difficult for the college to maintain,” she said.

Neuhardt added that the Glen is a “burden” only in the sense of being a financial drain on the college. And she stressed the commitment of college trustees to steward the preserved land that was given to Antioch in 1929 by Hugh Taylor Birch, and subsequently has been enjoyed and supported by generations of Antiochians, villagers and people from across the country. In 2015, the Glen was preserved in perpetuity as a protected conservation area.

Asked to specify how the college subsidizes the Glen, Neuhardt described the administrative overhead provided by the college to the Glen and other college assets, such as the Wellness Center. In the Glen’s case, this overhead includes its portion of payroll and human resource costs, as well as Glen-specific costs such as asset depreciation and amortization, according to Neuhardt.

In recent years, the college has begun charging an “overhead allocation,” or administrative overhead charge, to its assets. The charge is needed to accurately account for and recoup the support Antioch provides to different areas of the college, according to Neuhardt. The Glen has not been able to cover much or any of this charge, she added. In 2018, this charge to the Glen was $118,000, Neuhardt went on to say.

“The college incurs a significant amount of money to operate the Glen,” she said.

But Glen leaders counter that perspective. Executive Director Nick Boutis wrote in an email this week that the overhead allocation is a “misnomer.” It is not a calculation of actual expenses absorbed by the college, but instead an amount that the Glen is expected to contribute to the overall operation of Antioch, he said. Boutis added that environmental education centers around the country are “heavily supported” by their parent institution, and are not expected to generate excess revenue for that institution.

Glen Helen Ecology Institute, which consists of the Glen, the Raptor Center and the Outdoor Education Center, has essentially been required to cover its own operating expenses and capital improvements since the mid-1970s, according to Boutis. It does so through a combination of programs and donations.

Glen Helen annual reports from the past seven years seem to bear that out, with reported revenues being at, over or just slightly under reported expenses. The largest single revenue source, typically accounting for up to 42% of total Glen revenue over the past seven years, is program revenue.

That revenue is now in jeopardy due to the coronavirus, with school programs canceled through the end of the year and the fate of the Glen’s June and July Ecocamps currently undecided.

However, according to Neuhardt, even before the COVID-19 crisis, Glen Helen did not break even from the college’s perspective, mainly because of the overhead allocation.

“The Glen does not contribute anything to the college in terms of revenue,” she said.

Asked whether the college would consider selling Glen Helen to a suitable buyer, Neuhardt replied that trustees might consider the right proposal.

“The board would look at possibilities,” she said, adding that the college wouldn’t have to own the Glen to use it for programs. She cited the example of WYSO, which was sold to an independent nonprofit last year, but continues to be located on the Antioch campus and strategically aligned with it.

Neuhardt said the college would only want to put the Glen in the hands of a steward who would “not just protect the Glen, as Antioch has, but cause it to flourish.”

Asked about the role of GHA going forward, Neuhardt said she saw a “pivotal role” for the friends association.

“People care deeply about the Glen and want it to succeed,” she said.

On that, GHA and the college are in close agreement, according to another GHA trustee, Dan Rudolf.

“We exist to support the Glen. We want to do whatever we can to make that happen,” he said.