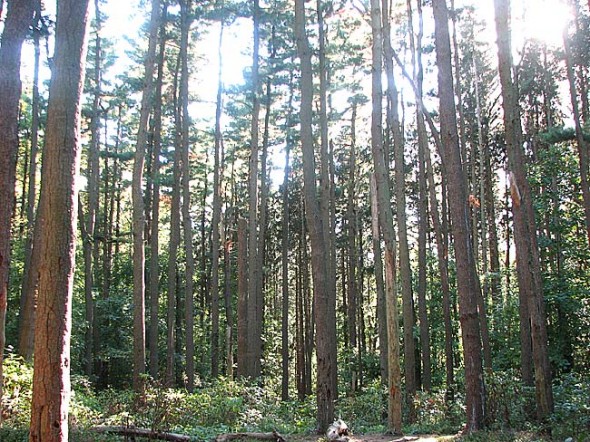 The fate of Glen Helen remains uncertain this week, with no deal yet between Antioch College and the Glen Helen Association, or GHA, a nonprofit group separate from the college. The two parties are in talks regarding a potential purchase of the 1,000-acre nature preserve by the GHA for an undisclosed amount.

“We’re hopeful, but we’re also nervous,” Glen Helen Association board member Dan Rudolf wrote in an email to the News. “Our board has a clear sense of what we can afford to bring to the table without undermining our chances for sustaining the Glen going forward, and we’re hoping that that is enough to get a deal done.”

In an email to the News, Antioch College President Tom Manley said discussions between the college and GHA were “in process,” and declined further comment.

According to a statement posted to Antioch’s website on May 22, the college and the GHA have been “quietly exploring” a new arrangement for Glen Helen for more than a year, well before the COVID-19 crisis that this spring necessitated the closure of the Glen to the public and furloughs of Glen staff and other college employees. COVID-19 has accelerated those discussions, the statement acknowledges.

“That exploration continues, although the COVID-19 epidemic has radically altered the financial landscape and heightened our sense of urgency. Antioch College remains completely committed to finding a best path forward to preserve the ecological integrity of the Glen and access for its students and the broader community,” the May 22 statement reads in part.

While Antioch College Trustee Sharen Neuhardt, who is leading negotiations for the college, has stated previously that there is no timeline on discussions with the GHA, she also has said the college may move to close the Glen down more completely after June 30, 2020, the end of the fiscal year.

A more complete closure would mean shutting down aspects of the Glen that are now operational, such as the Raptor Center, and could mean that furloughs of Glen staff would become permanent layoffs.

Meanwhile, an effort is underway to raise funds to assist GHA in the purchase of the Glen. About two weeks ago, a “Save the Glen” fund was set up at the Yellow Springs Community Foundation, or YSCF, for the stated purpose of aiding the GHA “to help purchase Glen Helen and restore and maintain access to the natural areas and programming,” according to a website created to promote the cause, http://www.savetheglen.com.

The website indicates that 80% of funds raised will go toward the purchase, with the remaining 20% applied to the GHA endowment for the future operation of the Glen. Checks must be made out to “Save the Glen” in order to benefit the GHA for that purpose, the website specifies.

The person who set up the fund prefers to remain anonymous, and the amount raised is not available for public disclosure at the fund creator’s request, according to YSCF Executive Director Jeannamarie Cox this week.

Rudolf of the GHA said that over 200 donations have come into the fund so far, about a quarter of which are from local donors. He called the breadth of response “heartwarming,” while also noting that the path for the GHA to purchase the Glen remains formidable.

“It is also a reminder for us of the steep uphill climb ahead because while [the fund] is a wonderful start, we will ultimately need to reach many, many more donors,” he wrote in an email to the News.

The GHA has not sought to raise its own funds for purchase of the Glen up to this point at the request of Antioch College, “to allow quiet space for negotiations,” Rudolf wrote in response to a News question.

If the college does sell the Glen, the move would be significant. Antioch College has owned and stewarded Glen Helen since the land was gifted to the college in 1929 by Hugh Taylor Birch in memory of his daughter, Helen. Preserved in perpetuity against development thanks to a 2015 conservation easement completed by the college with Tecumseh Land Trust, the Glen has long been a centerpiece of the college’s identity and learning experience.

“Other colleges own land labs, arboretums, or nature centers. None of them, however, offer the scope, history, proximity, or diversity of Glen Helen,” Antioch’s website states, showcasing the Glen as one of 10 “learning assets” at the college. Other learning assets include the Antioch Farm, the Wellness Center and the Coretta Scott King Center.

Glen Helen and its endowments were part of the $6.2 million cash transaction by which Antioch College Continuation Corporation bought the college back from Antioch University in 2009 after the university closed the college citing financial reasons the previous year. Public radio station WYSO, which has since been sold to a community-owned nonprofit, was repurchased from the university later, in 2013.

In recent years, Glen Helen has been part of the college’s strategy for achieving financial stability and revitalizing its curriculum. Since taking office in 2016, Antioch College President Tom Manley has spoken repeatedly of the college’s plan to use assets such as the Glen, the Wellness Center, the Antioch Farm and, formerly, WYSO in new ways to generate additional revenue for the college and create meaningful learning experiences for students.

Asked whether the college had shifted strategy in light of the sale of WYSO and the potential sale of the Glen, Board of Trustees Chair Maureen Lynch said the college had not changed its strategy but declined to elaborate. Manley declined to address a similar question from the News.

In public comments on Glen Helen this spring, Antioch leaders have emphasized that the Glen is both a treasured resource and a financial burden to the college. Antioch’s May 22 statement on the Glen highlights the financial necessity motivating the college’s discussions with the GHA.

“The College can no longer shoulder the burden of the programs and management of a quasi-public park at the expense of its core educational mission,” the statement reads in part.

The details and scope of that burden remain unclear, with some disagreement between Glen Helen and the college regarding the extent to which Glen program fees, fundraising, endowment funds and other revenue sources cover the preserve’s operational costs.

More clear, however, is the precariousness of Antioch College’s finances, which provide context for the potential sale of the Glen.

A News review of recent financial audits of the college, which are prepared annually by an independent auditor, shows that spending has outpaced revenues for the last four years, despite cuts to expenses and other austerity measures during that time. For example, Antioch ended fiscal year 2019 with $18 million in operating expenses and $14.3 million in operating revenue, a $3.7 million gap.

Most strikingly, Antioch College has borrowed heavily from its endowment in recent years to fund campus renovations and other projects. As of the end of the 2019 fiscal year, those borrowings amounted to $33.2 million of the college’s $45.75 million endowment, or nearly three-quarters of the endowment value, with an additional $3.2 million in accrued interest.

For the past four years, the college’s independent audit firm has flagged the endowment borrowings as a matter for Antioch officials to formally address in the audit. College leaders have done so in statements that explain the necessity of the borrowings and Antioch’s plans for achieving financial stability and restoring the endowment fund.

One statement reads, “The judgment of the Board of Trustees is that the endowment exists for the sole purpose of benefiting the College and that the continuing operation of the College could not be assured without borrowing of funds from the endowment.”

Another statement from Antioch officials highlights the college’s “long-term plans for maintaining and sustaining its financial stability and endowment, including full restoration of the endowment.” Those plans have four stated components: increasing net tuition and fees revenue; increasing charitable donations; reducing expenses; and “funding operations by integrating and leveraging assets.” Assets cited in the 2019 audit are Co-op, the Wellness Center, Antioch Farm and Kitchens, Glen Helen and the Coretta Scott King Center.

Prior to the 2019 sale of WYSO, the college’s radio station was also included in the asset list.

In the 2019 audit, auditors sound an alarm, absent from previous years’ audits, related to the endowment borrowings. Noting that Antioch will host an accreditation review in 2019–2020 and that the college’s eligibility for federal student financial aid relies on the reaffirmation of accreditation, the audit includes the following statement: “This factor, along with the significant endowment loans described [earlier in the audit], create uncertainty about the College’s ability to continue as a going concern.”

Asked about the significance of this statement, Antioch College Trustee Malte von Matthiessen said he believed the statement “spoke for itself,” and declined further -comment.

Von Matthiessen clarified that the college’s accreditation review is scheduled for the fall of 2020, having been delayed due to COVID-19. After losing accreditation as a result of Antioch University’s closure of the college, Antioch College was accredited by the Higher Learning Commission in June 2016, a significant milestone for the relaunched college.

Meanwhile, closure of the Glen has brought some problems to the preserve.

Closed to the public since March 26 due to the COVID-19 pandemic, Glen Helen has seen some unauthorized visitors during this time. It has also seen two tragedies. On April 21, an unresponsive person, later declared deceased, was found in the Glen. That death recently was ruled a suicide. And on May 24, a person drowned in the area of the Glen known as the Cascades.

Partly in response to these incidents, Yellow Springs police will be increasing law enforcement in the Glen, according to Village Manager Josué Salmerón last week. Specifically, local police will begin citing people for trespassing who are in the Glen in violation of its closure.

“We have to send a stronger signal that the Glen is closed,” he said.

Yellow Springs Police Chief Brian Carlson said local police already patrol parts of the Glen, and will step up their patrols, as well as begin citing people for violations that could include criminal trespassing, open container prohibition, disorderly conduct and public indecency, depending on the nature of people’s activities.

The first three of these offenses are tied to local ordinances and would be handled in Yellow Springs Mayor’s Court, Carlson said.

Carlson noted that local police have tried to take a low-key approach to policing in the Glen, with few if any citations issued to trespassers. But recent serious incidents and other factors require a change in approach, Carlson contended.

“The dangers that are present now in the Glen are monumental,” he said.

Asked about safety issues in Glen Helen this week, Antioch President Manley emphasized that the Glen and its trails remain closed to the public. “The safest course for any unauthorized individual or group of people is to respect the closure status,” he wrote in an email.

The college also confirmed that the Glen Helen ranger, Susan Smith, has been brought back to full-time duties as of May 19. She was previously reduced to half-time hours as part of Antioch’s furloughs of college staff in early April.

Reached for comment this week, Glen Helen Executive Director Nick Boutis, who is working limited hours as a result of the furloughs, said he believes most people are respecting the Glen’s closure. But he acknowledged some people are not. And with fewer members of staff and far fewer visitors present in the Glen, “it is an inherently riskier time.”

“I hope that people respect the police tape,” he said.