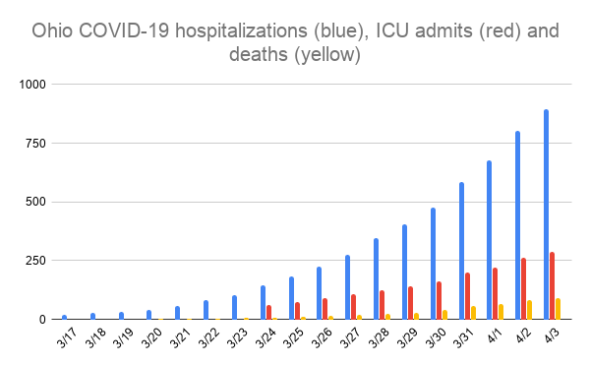 As the coronavirus spreads throughout the state, hospitalizations, ICU admissions and deaths are rising. (Source: Ohio Department of Health)

Confirmed cases of COVID-19 in Ohio rose to 3,312, the Ohio Department of Health reported on Friday, April 3.

There are nine confirmed cases in Greene County, which, according to the ODH, include the following:

A request for zip code data on the Greene County cases was declined by Greene County Public Health this week. ODH Director Amy Acton said the state health department was weighing whether or not to release of such information statewide. She raised concerns around privacy in zip codes with small populations. Over the course of the week, zip code data was released in the more populated counties of Cuyahoga, Franklin and Hamilton.

On Thursday, April 2, Ohio Gov. Mike DeWine announced that the state’s stay-at-home order, which expires on April 6, will be extended until May 1.

“We’re pretty sure there is no way we’re going to be out of this by then,” DeWine said the the May date, which is about a week after the state estimates cases of COVID-19 will peak in Ohio.

Some features of the new stay-at-home order include:

The Yellow Springs Chamber of Commerce issued a statement on April 2 canceling the June 13, 2020 Street Fair:

“It is with a heavy but resolute heart that the YS Chamber has made the decision to cancel the June 13 Street Fair. It is clear with the peak dates for COVID-19 continuing to extend, there is absolutely no certainty on an end date for this crisis. That uncertainty alone makes this recommendation the prudent thing to do.

But beyond being prudent, we believe it is just the right thing to do for the safety, health, and well-being of this community and others. From the standpoint of health alone, there are concerns with how to realistically determine a specific date at which gathering in large groups will really be safe. And there are certainly concerns about a large event, where physical distancing and proper hygiene are impossible, causing a resurgence in exposure and cases of COVID-19.”

In an email, Street Fair and Special Events Coordinator Alexandra Scott wrote that “due to the evolving nature of the COVID-19 situation, we have made the difficult decision to cancel the June 13, 2020 Street Fair.”

“All vendors who have submitted payment with their applications will receive refunds ASAP,” the statement continued. Vendors are urged to watch their email for further instructions from PayPal on how to claim a refund.

Submitted fees are not being held and vendors will need to reapply for future festivals. Vendors will receive an email when applications are ready for the October 2020 Street Fair.

Artists scheduled to perform during spring Street Fair will not be able to reschedule for the fall, as events have already been booked.

As an alternative for artists, the chamber hopes to plan “an alternate event for the community at some point during the summer,” but, if unable to do so, will begin booking acts for June, 2021.

The Chamber asks that affected parties be patient with any correspondence; Scott assures Chamber representatives will respond “as soon as possible.”

For more information, visit the Yellow Springs Chamber of Commerce website, yschamber.org or their social media pages for updates.

Owner of Sunrise Cafe and Calypso Grille Brian Rainey announced on social media on April 2 that he would be closing his two restaurants temporarily. Since dining rooms were closed on Monday, March 16, the restaurants have been open for delivery and carry out. He wrote:

“Its with an aching heart I confirm that we are closing temporarily. Its not about the money as we have been gracious, humbled and sometimes overwhelmed with the support and gratitude of locals and non-locals alike. Sure business has decreased dramatically but we’ve adjusted with a much smaller staff and made it work. We just need to step back and find some clarity. We need to find the safest way to serve you for our own safety. We need a break. We need to regroup. We’ve all been burning the candle at both ends and fear for our immune systems and therefore our family’s too. Its time to evolve. That goes for everyone i feel. Id like to thank everyone from the bottom of my heart for all the support and kindness and the response last night as we were busier than we could handle. Im humbled. Im grateful. Im a little sad but always optimistic. We will be back soon enough. Its a crazy time to be alive but a good time to evolve, reflect and love one another. And I’m thankful to be riding this out in Yellow Springs.”

Via the Yellow Springs Community Foundation:

The YSCF, in its role as the coordinating organization for the community response to the COVID-19 crisis, is helping to organize and operate a network of volunteers dedicated to making sure that no community member is left behind as we face this crisis. Neighborhood Block Contacts (NBC) will serve as communications point persons and information clearinghouses for neighborhood areas based on Block Party history. This interactive map indicates the exact boundaries for all of the “neighborhoods” in the Village (and the Township is coming soon!) along with information about how to reach your NBC. We suggest that you maximize the map for usability. You can zoom in/out, move the map, and show/hide layers with various information.