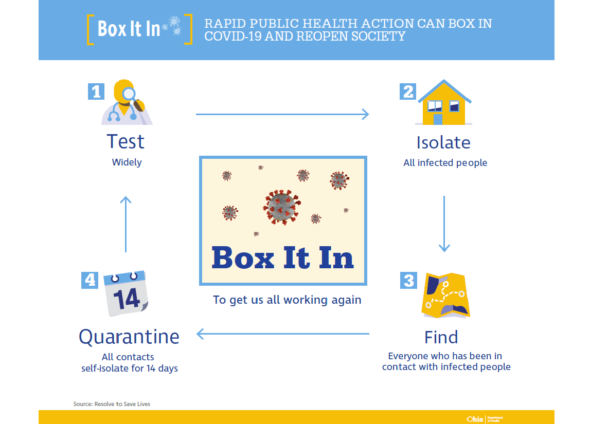 Testing is key to "boxing in" the virus, Ohio officials said on May 7. Still, testing rates lag in the state.

Restaurants, bars and some personal care services to reopen

Restaurants, bars and some personal care services will be reopening soon.

Ohio Gov. Mike DeWine announced reopen dates and new protocols for these businesses at his May 7 press briefing, the latest wave of May reopenings.

In order to reopen, businesses must follow specific guidelines developed by industry groups to limit the spread of COVID-19. The chairs of the restaurant and bar group and the personal care services group each provided an overview of these guidelines for their respective industries by video link at Thursday’s briefing.

For restaurants and bars, guidelines include separating tables by six feet of distance or physical barriers, limiting parties to fewer than 10 and reconfiguring open spaces into discrete floorplans to avoid congregate gatherings. Most restaurant employees will be wearing masks, and restaurants can require them of customers. Other changes include social distancing for queueing, having customers wait in their cars or a separate waiting area to be seated and serving customers from salad bars and buffets rather than permitting self-serve.

While restaurants and bars are not capped at a specific percentage of capacity, the new guidelines will have the practical effect of cutting occupancies by half, according to Lt. Gov. Jon Husted at Thursday’s briefing.

For personal care services, guidelines include social distancing, extra cleaning between client visits and employees wearing face masks. Business can require masks of clients. Other changes include requiring that clients wait for their appointment time in their cars or in a separate lobby area with social distancing markings. Magazines and product samples, staples of these businesses’ waiting rooms, will be removed.

Once restaurants, bars and personal care services reopen later this month, over 92% of Ohio’s private sector economy will be back online, according to Husted.

“The more contacts we have, the more that we do, the risk is up,” he said.

The risk is greatest for those over 60 and those with underlying medical conditions, DeWine said. But those under 60 can “get awfully sick,” he said, and can carry the disease to more vulnerable people.

Addressing the possibility of future spikes, DeWine said, “If we relax, if we pull back … in a month, six weeks … things are not going to go the way we want them to go.”

Business guidelines, testing and contact tracing and the efforts of individual Ohioans to adhere to social distancing will allow the economy to reopen safely, DeWine said.

On the subject of testing, Ohio Health Director Dr. Amy Acton said that Ohio had tested over 8,000 people the previous day, May 6, the largest number of tests conducted in a single day to-date. However, a previously announced testing capacity plan calls for expanding testing to over 14,000 tests per day by May 6 — suggesting Ohio is already lagging behind its testing plan by at least a week.

Because testing remains limited in Ohio, it is unknown how many people have the coronavirus beyond the state’s reported cases. Acton said that universities across Ohio would be starting a prevalence study this week. The number of people who have recovered from the virus is likewise difficult to determine based on existing data, she said.

Regarding the spread of the virus, Acton said that as a result of social distancing in the state, Ohio had brought the infection ratio down to 1 to 1, meaning that one person was infecting just one other person. The infection ratio in March prior to the stay-at-home order was 1 to 2.3, with one person directly infecting, on average, 2.3 people.

Acton said Ohio officials would be monitoring the infection ratio during the reopening phase. The ratio is referred to as the “reproduction number,” or RO, pronounced “R naught.”

Total reported cases in the state reached 22,131 on Thursday, a 555 rise over the previous day and about 100 cases below the 21-day average case increase. Total deaths reached 1,271, total hospitalizations 4,140 and total ICU admissions 1,167. All figures reported by the state are continuing to rise at or near the 21-day average, suggesting that the virus’ spread has not slowed down in Ohio.

The issue of mask-wearing, and some Ohioans’ opposition to the practice, came up several times during the questions portion of the briefing. DeWine called mask-wearing a measure “that’s going to save lives,” while Acton contended that research “has proven they make a big difference” in slowing the spread of the virus. Mask-wearing is recommended by the CDC. Acton likened the practice to following traffic laws or wearing seat belts.

One reporter noted that even as Ohio is requiring all employees to wear masks, many Ohio legislators were not doing so as they met on May 6.

Asked about bills passed by the GOP-controlled House on Wednesday that would limit the authority of the Ohio health director and lessen the penalty for violations of state health orders, DeWine stated unequivocally that he would veto the bills if they crossed his desk.

The existing law has been on the books since 1886 and gives the health director broad powers to order quarantine and other measures to protect public health. DeWine defended the actions taken under the law as “highly successful.”

“We can open up Ohio because we’ve taken those actions,” he said.

By opening state health orders to challenges in the courts, the new bills would result in “nothing but chaos,” he added.

4 Responses to “Restaurants, bars and some personal care services to reopen”