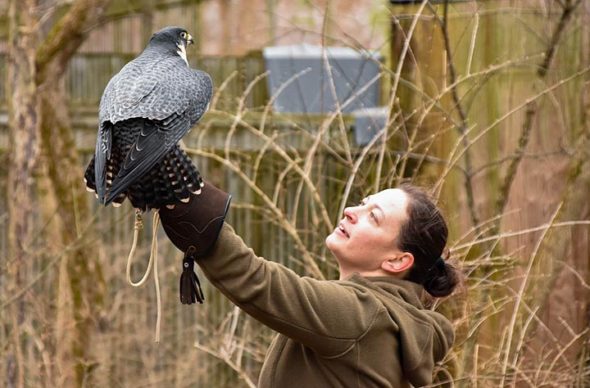 Rebecca Jaramilla, director of the Raptor Center at Glen Helen Nature Preserve, handled Velocity, a female peregrine falcon, during a raptor photography program at the center on Feb. 24. (Photo by Luciana Lieff)

Glen Helen isn’t open — yet. But the Glen’s new future owner is moving rapidly to raise funds, restore staff and work to reopen the 1,000-acre local nature preserve, which has been closed to the public since late March due to COVID-19.

Days after reaching an “agreement in principle” with Antioch College to purchase the Glen for $2.5 million, the Glen Helen Association, or GHA, unveiled a major fundraising effort. The local nonprofit seeks to raise $3.5 million in the first phase of a multi-phase capital campaign, according to GHA President Bethany Gray last Friday.

Gray said the first phase of funds would help the GHA reopen the Glen, restart educational programs and replenish the Glen’s endowments. Addressing deferred maintenance on buildings and grounds is another priority, she said.

“The board has done a lot of preparation and planning,” Gray said. “Now we are going to rely on and need ongoing support from people who love the Glen.”

The fundraising push is new for Glen Helen, according to Executive Director Nick Boutis, who has led the nature preserve since 2006. Boutis said the last capital campaign for the Glen probably occurred in 1955, when donors came together to fund the construction of the Outdoor Education Center. Smaller fundraising efforts have been mounted successfully over the years, such as the recent campaign for a new rehabilitation complex at the Raptor Center, he added.

Boutis called the $3.5 million initial campaign phase “an ambitious but doable goal,” emphasizing that at least that amount is needed to put the Glen on firm footing for the future.

Leading the campaign as the chair of the GHA’s development committee is villager Kat Walter, a local environmentalist and educator who will join the GHA board officially on July 1, but has been working on fundraising matters in advance of that date.

The capital campaign already has a modest head start, thanks to a local resident who established a Save the Glen fund at the Yellow Springs Community Foundation in mid-May to support a potential purchase of the Glen by the GHA. Though the amount raised is not being disclosed publicly at the fund creator’s request, Walter said 700 donations from over 400 donors spread across 190 zip codes have come into that fund so far. Of the total money raised, 80% will go toward the purchase of the Glen, and 20% will go into a GHA endowment to support future operations of the preserve.

“There’s been an outpouring of love from the community for the Glen to continue and thrive,” Walter said.

Current GHA board member Dan Rudolf emphasized that while an “amazing number of people” have donated to the Save the Glen fund in recent weeks, the GHA has a long way to go to reach its initial campaign goal.

“We still need an awful lot of money,” he said.

Alongside fundraising efforts — and to some extent contingent on them — the GHA is working toward rehiring Glen Helen staff. Eight of 11 Glen employees were furloughed by Antioch in early April, as part of a broader furlough of college workers related to COVID-19 shutdowns and financial pressures.

Executive Director Boutis was among those furloughed, and was subsequently brought back for limited hours paid for by the GHA. In recent days, he has been working full time on plans for the Glen’s reopening. While Boutis has yet to be rehired officially by the GHA, Vice President Betty Ross, chair of the personnel committee, said she expects him to be restored as the Glen’s full-time director.

“We have worked closely with Nick for so many years,” she said.

Ross also said Tom Clevenger, the Glen’s finance director, has been hired back by the GHA on a contract basis to handle financial matters.

Boutis said the GHA is committed to rebuilding Glen staff, but personnel planning remains somewhat premature, as the GHA and the college have not yet closed on the Glen sale and the association’s fundraising is still in its early stages.

“I’m hoping, by and large, to bring people over” to the GHA payroll from Antioch, he said. “It’s all contingent on the success of the fundraising effort.”

Asked whether Glen Helen had plans to hire a land manager, Boutis said the position was “a high priority hire, contingent on fundraising.” The Glen has been without a land manager since February, when the previous manager left. The position had not been posted by Antioch when COVID-19 hit in March.

Reopening the Glen is likewise tied to the GHA’s fundraising effort, with a commitment by the board to reopen the preserve “as soon as possible,” according to President Gray.

There’s no date yet for reopening Glen trails, but Gray said the association “hopes to reopen to the public this summer.”

When trails do open, there will be new social distancing measures in place to keep visitors safe, Gray added. These will likely focus on trail “bottlenecks,” high-traffic areas of the Glen adjacent to the village and the Glen parking lot.

As a measure of how eager area residents are for the Glen’s reopening, a new Raptor Center program launched last week sold out overnight, according to GHA board member Scott Geisel. Called Neighborhood Owl Prowl, the program brings, for a fee, three educational ambassador owls to participants’ front yards in and around Yellow Springs for a 30-minute learning visit.

The Raptor Center itself remains closed to the public, with the birds under the care of the center’s director and volunteers.

The Outdoor Education Center, or OEC, also remains closed, having been shut down in mid-March in response to the COVID-19 crisis. Boutis said this week that the current plan is to reopen the OEC this coming winter, with school programs restarting in January 2021, dependent on school budgets and pandemic conditions.

“Schools want to come,” he said.

Before any restart can happen, however, the Glen first has to change hands. Last week’s “agreement in principle” is not yet a final sale of the Glen, though it’s a decisive step in that direction.

Under the agreement, the GHA will pay Antioch $2.5 million over 10 years for the land, buildings and related assets of the Glen. According to GHA board member Rudolf, the deal follows a mortgage-like structure, with an upfront payment of $500,000, annual payments of $50,000 for 10 years and a “balloon” payment of $1.5 million at the end of 10 years.

Built into the agreement is a provision concerning what would happen if Antioch were to close before the end of the 10-year period, Rudolf said in response to a question from the News. He declined to specify publicly the terms of the provision, details of which are still being negotiated.

Both parties anticipate a closing on the sale to take place later this summer.

Funds for the $500,000 upfront payment will come from a portion of Glen Helen conservation easement proceeds held in a term endowment fund at the Dayton Foundation, according to Rudolf. Most of the $3 million easement proceeds, related to the conservation effort that culminated in 2015 with permanent protection of Glen Helen, remain in a permanent endowment at the foundation.

Those permanent funds, designated for the Glen, will go to the GHA for land stewardship, environmental education and facility maintenance, Rudolf said.

About a dozen endowment funds at area community foundations benefit the GHA and Glen Helen, according to information from the Dayton Foundation, Springfield Foundation, Greene County Community Foundation and Yellow Springs Community Foundation. In addition, Antioch holds the original endowment for the Glen’s support, whose core funds were donated by Hugh Taylor Birch, who gifted Glen Helen to the college in 1929. Antioch will continue to hold that endowment, the principal of which will eventually go to the GHA.

Despite these multiple sources of endowment support, a key priority for the GHA is to build up and replenish endowments, according to Rudolf.

That’s because the endowments benefiting the GHA are relatively modest, and Birch endowment support, which previously was a significant revenue source for the Glen, has dwindled in recent years, Rudolf explained.

“We need to build endowment support for the Glen back up to the levels it used to be,” he said.

The most recent financial audit for the GHA, covering the fiscal year ending on June 30, 2018, shows that the association had about $1.13 million in net assets held in area community foundations at the midpoint of 2018, generating just under $100,000 in investment income. The GHA’s largest source of support for the 2018 fiscal year was donations, gifts and grants, totaling around $162,000. The association made a cash gift to Glen Helen that year in the amount of approximately $165,000.

The recently launched capital campaign aims to catapult the association from being a friends organization with a membership focus to being the owner and operator of the Glen with fundraising as a primary goal, according to GHA President Gray.

“We’re shifting from being an auxiliary organization driven by membership and events to being a fundraising organization,” she said.

New role for the GHA

According to the GHA website, the association was created in 1960, after successful efforts to save the Glen from a proposed highway bypass and then a sewer line. It became a nonprofit organization in 1979, and now is “moving into a new stage of supporting the Glen by taking over ownership,” the website states.

The GHA already has expanded its role in recent years as Antioch College has struggled financially, according to several board members in previous interviews with the News. For example, the association has covered some or all of the cost of five Glen staff positions for the past several years. In addition, trustees and members annually donate thousands of volunteer hours, including running the Nature Shop, organizing the annual Pancake Breakfast fundraiser and helping with trail maintenance and the removal of invasive plants species from the Glen. And since 2015, GHA has purchased three additional parcels totaling 150 acres to add to and buffer the Glen.

Once the sale is finalized, the question becomes, will the GHA, formerly a membership organization with 1,000 contributing members, succeed in its broader and more complex role as the owner and operator of the Glen?

“The GHA is solid. They’ve really been building capacity,” she said of recent efforts to prepare for possible ownership of the Glen.

Magaw also predicted that the association would garner strong support from the local community, Antioch College alumni and others connected to the Glen.

“I think they’ll get some very good support. Alumni will want to be as generous as they can,” she said.

Ross, who has been involved with the Glen since 1985 and served for many years as the Raptor Center director, said the GHA is prepared to deal with the challenges of running the Glen, thanks to staff dedication, board commitment and public support.

According to Boutis, most nature preserves across the U.S. are located on land owned and operated by independent nonprofits. Comparatively fewer are located on municipal land or land owned by colleges and universities, he said.

“One of the things that should give the community a level of confidence is that the healthiest and most vibrant [nature preserves] are owned and operated by nonprofit entities that are able to focus all their energy on them,” he said.

Boutis counts such focus as a major upside of the transfer of ownership from Antioch to the GHA.

“The biggest benefit is our ability to focus on the Glen’s needs and interests with no distraction,” he said.

But he acknowledged that Glen Helen and the GHA are entering new territory, filled with unknowns compounded by the ongoing COVID-19 pandemic.

“It’s a giant leap for all of us with many giant leaps to follow,” he said.