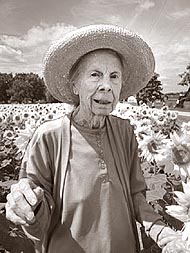 The life of Peggy Miller, which she often described as “perfect,” ended on Friday, June 5, at the age of 91. She spent her last days and hours wearing a smile, accompanied by all of her children, at her Friends Care independent living residence in Yellow Springs.

Peggy grew up in Indianapolis, Ind., as an only child of a mostly single working mother, whom she adored. On her first visit to church, she decided that God was her father after hearing all the “father” references during the service. She found great comfort as she continued to travel to church alone by streetcar.

As a high school student, the famously shy Peggy began to come out of her shell. She was chosen to be a model for Ayres Department Store, and played a lead role in the senior play. During her freshman year at Hanover College, she met the love of her life, Dick Miller. Forbidden by Dick’s mother to marry before graduating, Dick and Peggy proceeded immediately from their morning graduation directly to their afternoon wedding. This month would have marked their 70th anniversary.

Family bragging rights have always included Peggy’s time working at the Princeton Institute for Advanced Study, which included Einstein, Von Neumann, Oppenheimer and other famous minds, while Dick was a seminary student at Princeton. As a member of the secretarial pool, she would regularly receive tips of the hat from Einstein. One day, she dusted his office (and may or may not have adjusted formulas on the blackboard).

Dick’s life as a chaplain in the Air Force provided many challenges, as well as memorable world-traveling experiences for the entire family. Her children, all with names beginning with “R” as in Richard, came to understand what a pioneer mother she was in so many ways — early to have a natural childbirth, to nurse her babies, and to adopt the Dr. Spock child-rearing philosophy.

Peggy was a relentless reader after she began her own “self-improvement” course by subscribing to TIME magazine in 1958 and reading every book on their recommendation list. Her reading list expanded greatly over the years and paired up with a Turner Classic Movies obsession in her later years.

Peggy and Dick’s philosophies and religious beliefs were expressed from an ecumenical and social justice perspective, as participants in civil rights efforts and Peggy’s volunteering in the early days of Head Start in Montgomery, Ala. These values took root early on and have greatly shaped her children’s and grandchildren’s lives.

Peggy and Dick greatly enjoyed living in Yellow Springs and being members of the Friends Care Community. Given that Peggy hoped to die at the same time as Dick, she felt no need to extend her “perfect” life and actually looked forward to her death. This did not prevent her from enjoying the final years of her life, which included frequent visits from children, grandchildren and extended family. Peggy will be missed terribly, but her family is very happy for her.

Peggy is survived by her four children: son, Richard David (Sheila) Miller II, of Yellow Springs; and three daughters from the San Francisco Bay Area, Randice (William) Roberts, Rhian (Thomas) Miller and Robin (Ralph) Seban. She is also survived by seven grandchildren, Kelly and Lois, of Yellow Springs; and Allison, Evan, Atticus, Rachel and Reilly, of the San Francisco Bay Area; and “adopted” son Paul Comstock, as well as the beloved Bentino’s Pizza family of Yellow Springs. She is also survived by brother Mark (Susan) Burke from her mother’s later marriage, and their children Sarah, Philip and Andrew of Indianapolis, Ind.

The family requests that anyone wishing to honor Peggy’s memory consider a donation to the Friends Care Community: 150 E Herman Street, Yellow Springs OH 45387, or to Hospice of Dayton, 324 Wilmington Avenue, Dayton, OH 45420.

One Response to “Peggy Miller”