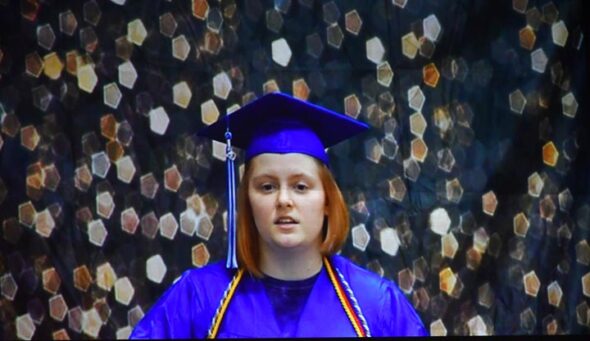 Zoe Clark and Julia Hoff were selected by a committee of teachers and administrators based on individual videos the young women prepared and submitted for the committee’s consideration. Pictured above is Clark. (Photo by Kathleen Galarza)

There’s no denying that the class of 2020 has had a difficult, and in many ways disappointing, finish to the academic year. But the two new graduates chosen to speak for their class at Wednesday evening’s commencement ceremony are focusing on resilience, compassion and hope as they move into the next chapter of their lives.

Zoe Clark and Julia Hoff were selected by a committee of teachers and administrators based on individual videos the young women prepared and submitted for the committee’s consideration. The school introduced the practice of naming two student speakers last year after eliminating class rank and consequently the valedictorian and salutatorian designations.

After being chosen this year, the seniors recorded their speeches dressed in cap and gown for screening as part of the outdoor, “drive-in” ceremony that this year, due to COVID-19, replaced the traditional event in the high school gym.

Clark and Hoff have been classmates for 12 years, together attending Mills Lawn, McKinney Middle School and Yellow Springs High School. Clark began in kindergarten, while Hoff entered in first grade, after a year of Pre-K and another of kindergarten at the Antioch School.

Both plan to continue their education at area schools.

Clark, who has lived with her family in the city of Clayton in western Montgomery County throughout her school years, and attended Yellow Springs Schools through open enrollment, has her mind set on getting a doctorate in physical therapy. She intends to begin her quest at Sinclair Community College, earning an associate degree as a physical therapy assistant so she can work in the field — and hopefully earn better than minimum wage — while continuing on at a four-year school. She’s already been accepted at Bowling Green State University, but feels that starting at Sinclair is the more economical choice.

With school closed this spring and classes moving online, she started working May 1 at a Kroger store in Huber Heights, about halfway between Clayton and Yellow Springs.

Her interest in physical therapy stems in part from her own life experiences, having sustained an injury that kept her from continuing to play basketball after middle school.

“I’ve spent a lot of time in [physical] therapy,” she said by phone earlier this week.

It didn’t stop her from joining the high school’s new bowling team, however, and serving as captain of the girls squad the past two years.

She also was active in theater throughout high school, and says the biggest highlight of her entire school career was learning at the end of her junior year that she had secured the female lead in “The Bigfoot Letters,” presented this past fall.

She based her commencement talk on a song by the country music group Rascal Flatts.

“It really has meant a lot to me,” she said of the song titled “My Wish.”

The lyrics offer encouragement for following one’s dreams even when life is difficult.

“I know this year has been really hard for us,” Clark said. “But there are good memories, too. We accomplished a lot.”

The success of “The Bigfoot Letters,” which was chosen to be showcased at the annual state high school theater conference, was one such achievement. COVID forced the cancellation of the conference, but the cast still had the honor of being selected.

“My wish for our class as a whole is that we’ll continue pushing forward … and that they’ll all accomplish what they want in their life.”

Hoff, who grew up in Yellow Springs, said that she’s been thinking a lot about choices, and making choices amidst tough times.

Active in high school theater, like Clark, Hoff had the leads in the school’s musical productions of “Oklahoma” and “The Sound of Music.”

And she plans to continue in theater as a performance major at Wright State University.

Her roles center stage, however, followed a number of years when she says she was the target of bullying. Elementary school was especially hard, she said.

While she didn’t detail her negative experiences, she said they inspired her to become a part of SPIDEE, which stands for Students Promoting Inclusion, Diversity and Equity in Education. The local high school group meets with and mentors younger students at Mills Lawn, in addition to other community-building activities.

She said that the main lesson she learned, and that she shares in SPIDEE, is that we have choices in how we respond to adversity.

“Don’t allow others to make you into an angry person,” she added. “That’s so exhausting.”

Her attitude has been helpful this spring as school activities were suspended amidst the global pandemic, and as she went to work last week at the downtown retail shop Asanda Imports.

“I think it’s important for everybody to recognize that these times are impossible,” she said, and then focus on “how we treat one another and on the lessons we can learn from it.”

She noted that at the beginning of the shutdown, she had a sense of people coming together, but that feeling has eroded over time.

“Now I feel like we’re more separate,” Hoff said. “It’s important for us to recognize that we’re all connected. … We need to be supporting one another.”