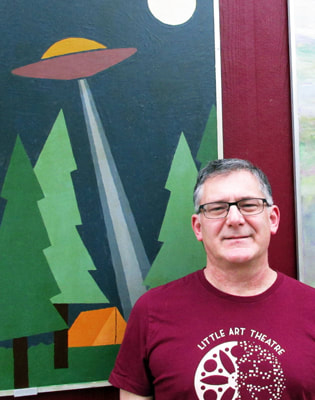 Jackson Flint may be a wisecracking, hard-boiled detective, but he’s also a townie. More often than not, he’ll make time for a cup of coffee at the Emporium or pick up some groceries at Tom’s Market before covertly tailing a suspicious car or keeping his eyes peeled during a high-tension stakeout.

Flint is the creation of local writer Scott Geisel, who in addition to teaching English at Wright State University, has lived in Yellow Springs for over 20 years and written fiction for even longer. Geisel’s new novel “Fair Game,” available at local bookstore Dark Star Books, follows private investigator Flint’s quest to solve a mysterious, and fictional, years-old missing persons case. The mission takes him to various locales not just in Yellow Springs, but also surrounding areas like Dayton and Columbus.

When asked what inspired him to choose his own town of residence as the setting for a mystery story, Geisel cites his longstanding love of the village, but noted that it came naturally from his passion for reading and writing mysteries, as well. Before he and his wife went on vacations, they would read mystery novels set in the places they planned to visit.

“I thought, why doesn’t Yellow Springs have a mystery series?” he said, citing his appreciation for characters like William G. Tapply’s Brady Coyne, who investigates cases in Boston, or Steve Hamilton’s Alex McKnight, whose locale of choice is Michigan’s Upper Peninsula.

Geisel also noted that he had been trying to write mysteries independently for a while, but was dissatisfied with the fictional towns he had been setting the stories in.

“Once I put it in Yellow Springs, it became a lot more fun to write,” he said. “That was the key to really bringing it all together.”

Aiding in Jackson’s investigation are his burly best friend Brick and intelligence tech expert J’Leah. While both were initially founded on classic sidekick archetypes, Geisel imbues them with a little more depth and thoughtfulness than you might see in a more traditional detective story.

“I wanted to make sure the characters weren’t just flat,” he said, referencing detective novels that are content to provide mysteries without developing their characters further. Even Jackson himself is not simply a classic detective type: he is a single dad and a devoted member of the community, genuinely coming across as the kind of guy you might meet in Yellow Springs. If “Fair Game” becomes the first installment of a series, Geisel wants to give his characters room to grow and change.

As for the book’s target audience, while it may be fun for readers who live in the village to look for familiar landmarks and references, Geisel claims that he really wrote the novel for everyone.

“It’s for Yellow Springers, visitors and anyone who reads it and thinks to themselves, ‘hey, that’s a cool little place,’” he said.

There was one major potential problem to keep in mind during the writing process, though, and it went hand-in-hand with setting the novel in a real-world town. Geisel worried that his story of dark secrets and clandestine cover-ups might not play so well with some residents of the real Yellow Springs, and also took care to depict his village in the best possible light.

It isn’t only the story that is a local affair, either: “Fair Game” is self-published, and was proofread and edited by town locals.

“I’ve been through the traditional publishing route,” Geisel said. “You spend a year, or two, or three, trying to get a book published.”

When he really started writing the book, he says, it didn’t feel like work, and the freedom afforded to him by independent publishing allowed his passion for the town to shine through in the writing.

“I enjoy my work a lot more when there isn’t someone else telling me how to do it,” he said, chuckling.

*Crawford is a Miller Fellow working with the News.