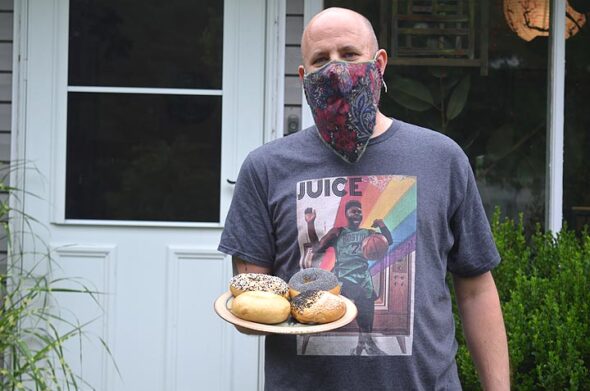 Local chef Ben Bullock recently opened a new micro-bakery out of his home in the village. Bootleg Bagels offers made-to-order bagels that are chewy on the outside and soft on the inside with a variety of toppings. (Photo by Megan Bachman)

What the village kneads— ‘Bootleg’ bagels fly from local kitchen

In fact, they’re coming out of a local home on Shawnee Drive, still warm in the bag.

Ben Bullock, the baker behind the phenomenon, is thrilled with the reception of his new bagel business in Yellow Springs.

“It was surprising how excited people were,” Bullock said.

Bullock, who can bake seven dozen bagels a morning, has sold out every day since launching on Saturday, Aug. 8. With such high demand, he’s taking orders several days in advance.

In addition to being uber-fresh, Bullock’s bagels have the signature chewy crust and soft inside of a New York-style bagel, more than 600 miles from the Big Apple.

That feat is accomplished by boiling the bagels before baking them, Bullock explained. Many mass-produced bagels are steamed, if they are pre-cooked at all.

“A lot of bagels are just browned bread with a hole in them,” Bullock said.

At present, customers can choose between plain or top-flavored bagels. Toppings include sesame seeds, poppyseeds, salt, garlic, or all of them plus onion, an option known as an “everything” bagel. Bullock said he’s experimenting with dough recipes and may soon add new flavors.

An experienced chef with village roots, Bullock most recently was the sous chef at Meadowlark Restaurant in Kettering for the last decade, until the coronavirus pandemic hit. Prior to that, he worked at the Winds Cafe and at the Simon Pearce restaurant in Quechee, Vt.

Bullock moved back to Yellow Springs in 2008 and lives here with his wife, Elyssa, a kitchen designer, and their two daughters, Maggie, 9, and Penny, 3. He primarily grew up here, moving to the village with his family in 1987, and graduated from Yellow Springs High School in 1996.

“I’ve spent the majority of my life here in town,” Bullock said.

Bullock decided to start his micro-bakery recently in the wake of the COVID-19 shutdowns. When restaurants, schools and daycares were closed in March, Bullock began to stay at home to care for his daughters. With a compromised immune system, he continued to stay home when restaurants reopened. So he set out to think of a food he could make for the local market.

Bullock chose bagels for several reasons, he said. First off, he didn’t want to compete with other local home-based bakeries, such as Blue House (bread) and Salty Lark Pies (sweet and savory pies).

“Those are both foods I’m pretty well versed in and I didn’t want to cut into the market,” Bullock said. 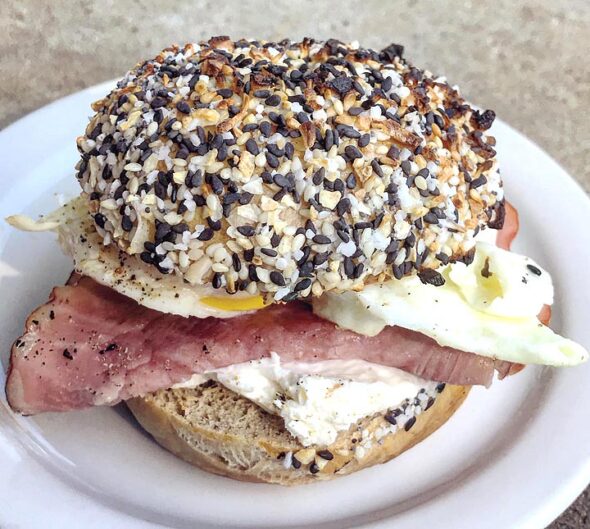 Local baker James Luckett praised Bullock’s bagels in a Facebook post showing an everything bagel sandwich he made with ham, egg and cream cheese. (Photo by James Luckett)

Bagels also worked out well, he said, because of the stop-and-go process. After the dough is mixed, they proof overnight, and are baked the following morning.

“You work really hard and then wait, which works pretty well for having to be also the wrangler of children,” he said.

But Bullock is no stranger to bagels. In fact, his first cooking job, while still in college at Wright State, was at the Bagel Cafe in Beavercreek. That led to a 20-year bagel break.

“I became extremely sick of bagels, mostly because I could take home as many as I wanted and as a poor college student, they pretty much sustained me,” Bullock joked.

But Bullock returned to bagels during a more recent foray into fermentation, which was sparked by the popular book, “The Noma Guide to Fermentation.”

“I’ve been getting into fermentation on my own, making my own misos,” Bullock said. “I’ve been having fun and doing weird stuff.”

“Bagels are technically a form of fermentation,” he added.

Bullock’s fermentation fascination sprang from a love of cooking developed while working in restaurants in his younger days.

After receiving his degree in theatrical lighting design, Bullock found work in restaurants because “finding a job in a restaurant is certainly easier than at a theater,” he said. He started out as a dishwasher, after which he realized he would rather be cooking meals than cleaning up after them.

“It’s always been a combination of art and science,” Bullock said of cooking. “Of course, baking is leaning much harder into the science of it.”

Bullock’s bakery is technically a “cottage food production operation.” The Ohio Department of Agriculture allows the sale of food products cooked in one’s home as long as they are not “potentially hazardous,” such as those requiring refrigeration. Among the list of acceptable cottage food products are cookies, breads, cakes, fruit pies, jams, bagels and more.

With his chef’s hat on, Bullock offered some serving suggestions for his bagels. Veggie or cold cut sandwiches are good options, and even hamburgers can be served on a bagel, he said.

Customers have also been raving about the quality of Bullock’s bagels, which several noted are on par with bagel shops on the East Coast.

“After 20 years I have finally had a delicious bagel in Ohio!!!!,” one satisfied customer wrote.

And what’s in the name, Bootleg Bagels?

“I’m a fan of alliteration but I didn’t want to do Ben’s Bagels,” Bullock joked.