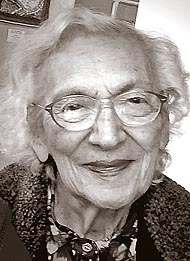 Born in 1927 in New York City to loving parents Lillian and Edward, and joined by brother David, Bernice adored the city: roller-skating over the Washington Bridge and spending summers at Brighton Beach with her grandmother. In 1941, her union-organizer father got blacklisted and Eleanor Roosevelt got him a small job in the New Deal Administration, so the family moved to the planned community of Greenbelt, Md. In D.C., Bernice fell in love with Herbert Ezekiel and his entire family.

In the early 1950s, the couple moved to Dayton, where they raised Michael, Jonathan and Judith. They lived in Dayton View, both because it was the sole neighborhood that sold to Jews and because it was “racially integrated.” While Herbert had grown up in segregated Texas, Bernice had frequented people of all races and ethnicities in Washington Heights and felt right at home. Life in their home was a bit like “The Durrells in Corfu” — minus the weather and scenery. In addition to the cats and dogs, there were lizards, gerbils, snakes, praying mantises, tadpoles and moths. The couple was politically active, particularly in the Dayton View Neighborhood Council. Bernice worked at Beth Abraham Synagogue and was involved in the Jewish community, including serving on the Hadassah board into her 90s.

After Herbert died in 1974, Bernice went back to school at Wright State and became a social worker for Catholic Social Services. She married Bertram Brant and they shared three decades of love and adventure: traveling, going to plays and concerts, playing Scrabble and organizing picnics with their “extended family of friends.” Warm and optimistic, Bernice truly loved people: as granddaughter Clara wrote, she “glowed from the inside” and brought “joy and warmth to anyone lucky enough to cross her path.”