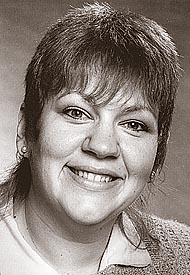 Christine held an honorary degree in acting on stage, in movies, music videos, etc. She was a member of the Dayton Theater Guild and Children’s Theater at Memorial Hall, and was notably an active participant at the Jeremiah Comey Acting Studio in Los Angeles. Also of note: she originated “The Frenetic Four” as Ruby Red on WYSO radio, Yellow Springs, in the 1970s.

She is survived by her husband, Klaus; sons, Jake and Zach; and three grandchildren.

Before she died, Christine coined the phrase: “Today is a good day to have a good day.”

One Response to “Christine Groner”