Rose & Sal Vintage Shop on Dayton Street is unveiling two additions to its retail space: A vintage-inspired mural by villager Anna Burke and an indoor/outdoor studio space that can be rented for community events and other uses.

The mural and space will be unveiled with a free community event this Saturday, Sept. 26, from 4 to 7 p.m., featuring live music, a DJ and a vintage clothing fashion show. (Submitted photo)

The latest addition to Yellow Springs’ downtown public art scene is a breathtaking mural by villager Anna Burke, which was recently completed behind Rose & Sal’s Vintage Shop on Dayton Street.

Feeling a need to get back to her center, Burke took a break from doing gallery shows last year.

“I was getting to the point where I was starting to think what am I going to make that is going to sell?” she said.

Coming back after this much-needed break, her first project was a commissioned mural behind Rose & Sal, an antique and consignment shop on Dayton Street. The mural was inspired by the works of California-based artist Jason Yates. Looking to create something new that felt vintage, Burke walked through Rose and Sal’s selecting her color palette from items on the shelves.

A unveiling of the mural and a new community space behind Rose & Sal will be Saturday, Sept. 26, from 4 to 7 p.m., featuring live music from Aodhan, Crabs Without Legs and Jojomber; a DJ; and a vintage clothing fashion show. Masks and social distancing are required.

Burke’s work is graphic and uses a lot of symbolism. Once described as a psychedelic expressionist, she does not like to title her work, or style.

“I pretty much want it to be freely interpreted by the viewer,” she said.

At her shows, Burke likes to hang back and not identify herself as the artist. This gives her a chance to listen to what people say, good or bad. 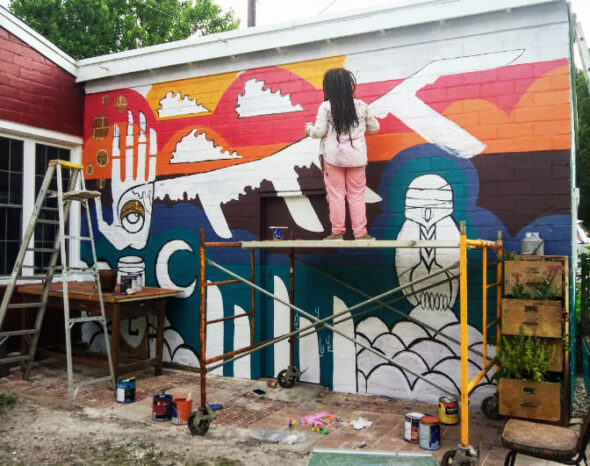 Burke’s outdoor mural was inspired by the color palette and vintage items in the store. It’s a three-dimensional work that wraps around the building and took Burke 42 consecutive days to complete. Burke, who has shown her work widely in the village and taught art classes, said the shop owners let her creativity shine. (Submitted photo)

A self-taught artist, Burke began her career at the early age of fifteen. For Burke it is important to pick projects that speak to her and to work thoughtfully.

“I won’t do anything rushed,” Burke said. “One of the things my dad taught me was do it well or don’t do it at all.”

Although Burke has expressed her creativity through jewelry-making, sculpture, collages, and 3D art, she is mostly known for her painting. She’s done private art shows and commissions and painted planes, cars, walls and even bodies, she said.

Burke also finds joy in helping young artists navigate through key parts of the art-making process and helping streamline their work into digestible pieces for viewing. Even though she is only 28, she enjoys working with the younger generation in a variety of educational venues, she said.

That everyone has access to her art is important to Burke, and she looks for ways of keeping her work accessible to everyone while having it still pay for her time and supplies. She finds there is no straightforward way to set a value to art.

“I leave a pay range tag on a lot of my pieces starting pretty low,” she said. And many times, she added, a person’s passionate reaction to her work has led her to give it away for free.

Seeing her art produce emotional responses from viewers or cause memories to be renewed is rewarding enough in itself for Burke.

“I am allowing a storyscape that someone can put themselves into,” she said.

During these momentous times, Burke sees art as provoking thought and believes it is artists who drive movements for change.

“It doesn’t matter what the movement is, whether it is social, political or creating a poster for a rock and roll show, you are moving things along,” she said.

Creating art is a very personal process for Burke. She likens it to reaching inside of her body and putting her heart and soul on the table. After completing a piece, Burke always does a self-examination and is often dissatisfied.

“It’s not because I don’t like what I did, but I always know I can do better,” she said.

Not surprisingly, after finishing a big mural she is in a very emotional place. Creating a mural is a public performance which opens the artist up to watchful eyes during the process, she added.

“It was basically like getting dressed in front of everybody.” Burke said. “They get to see your mistakes.”

Her experience of feeling exposed while creating the mural made Burke think about how we judge and view others not knowing what they have been through or what they will do next.

“Everyone is just working on a masterpiece in their life and they can paint over it later if they want.”

Burke has worked with or shared studio space with many of Yellow Springs artists. Doing large works in a public space was a new experience and she is looking forward to doing more murals.

“If you want your garage painted give me a call.”

*The writer is a fourth-year Antioch College student and Miller Fellow for the News.