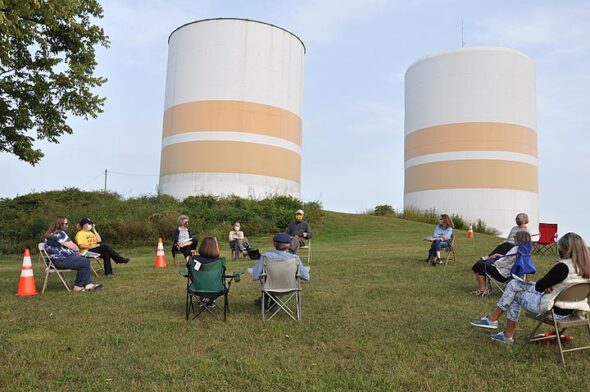 Plans are taking shape for a Yellow Springs dog park on 1.3 acres of Village-owned land at Gaunt Park. If approved by Council, the park would be developed and maintained by a nonprofit association and would serve the furry residents of Yellow Springs. Here, a public meeting at the site last Wednesday drew about 20 villagers. (Photo by Audrey Hackett)

Yellow Springs may — finally — get a dog park.

A new plan is afoot, or a-paw, to locate a park for Yellow Springs’ furry residents on 1.3 acres of unused land west of the water towers at Gaunt Park, abutting Talus Drive and a farm field. The proposed dog park would be fenced along the perimeter, with internal fencing separating play areas for large and small dogs. Boulders, wooden shelters and other features would encourage canines, and their human companions, to romp and relax.

“A dog park is more than half for the people,” project champion Richard Lapedes said in an interview. He added that a Yellow Springs dog park would be a “potent amenity,” enhancing life in the village.

And the planned canine recreation spot at Gaunt Park is perhaps more people-focused than most. What’s envisioned for the site is a “S.M.A.R.T. Dog Park,” a concept developed by outside consultant Beth Miller for the Yellow Springs project. The acronym stands for safety, manners, awareness, responsibility and training — all components of a successful dog park that serves as a social hub for the community, according to Miller, who is the owner of a Dayton-based consulting firm called Wagtown.

“Dogs are the ultimate social lubricants,” she said.

Lapedes initiated the project last fall, after his dog, Betty, nosed at the fence that currently extends partway around the proposed site. “Betty found it,” he said.

In fact, the Village-owned site had previously been considered in one of several past attempts to create a Yellow Springs dog park. Opposition from Talus Drive neighbors nixed a previous plan. But Lapedes has already approached several neighbors, and believes the project will get a better reception this time.

After Betty’s discovery, Lapedes contacted Council President Brian Housh about the site. Housh connected him with Miller, an expert on how to make communities more “dog friendly.” Lapedes has hired Miller to guide the development of the local park, and is covering her consulting fees. A third member of the project team is Village Director of Public Works Johnnie Burns, who is supportive of the idea and currently oversees maintenance of Village parks.

The trio received encouragement from Village Council last October to pursue the concept, and delivered an update to Council this July, including a draft concept and layout for the park. The organizers then held two public meetings earlier this month and launched an online survey to gather public feedback.

The survey, accessible at http://www.wagtown.org/yellowspringsohio, is live through Sept. 30. Responses that have come in so far indicate strong support for a dog park and the S.M.A.R.T. concept in particular, according to Miller.

Other indicators point to overall support in Yellow Springs for a dog park priority. The creation of such a park is identified as a priority in the village’s new Comprehensive Land Use Plan. And the past decade has seen at least two serious efforts to create a dog park here. In 2010, Yellow Springs High School seniors Marlee Layh and Lucas Donnell proposed a dog park at Ellis Park. The project was ultimately voted down by Village Council because of objections to the location. The Village then briefly considered Gaunt Park as an alternative location.

Another effort was mounted beginning in 2014 by villagers Linda Rudawski, Lauren Miller and Diane Wilson, who is now deceased. The women worked toward a local dog park in conversation first with John Bryan State Park and then with Antioch College, but fell short of securing a suitable spot.

A Facebook group started at the time and still maintained by Rudawski, now with 315 members, is actively promoting the current effort.

Council will hear a presentation of the dog park proposal later this fall, and ultimately vote on the use of the Gaunt Park site. If approved, the park would open in the fall of 2021, organizers anticipate. 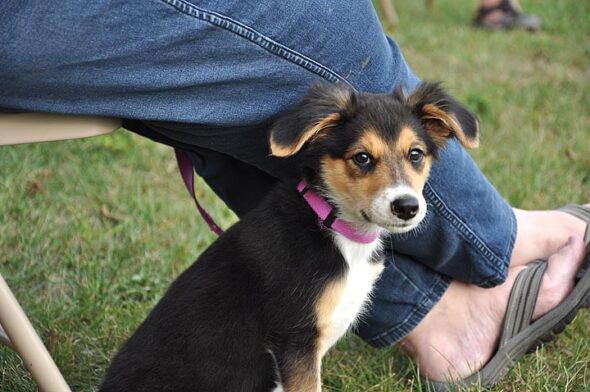 Among the attendees at last Wednesday’s public meeting regarding a Yellow Springs dog park was Remmie, a young Sheltie mix recently rescued by villager Pam Nicodemus. (Photo by Audrey Hackett)

While the Village would allow use of the land, Yellow Springs taxpayers would not carry the cost of setting up or maintaining the dog park. A nonprofit dog park association, now being formed, would develop and operate the space, including raising funds for start-up and ongoing costs.

A budget prepared by Wagtown estimates a first-year project cost of $51,410, with $42,000 in capital expenses to create park infrastructure, and $9,410 in annual operations expenses, such as mowing and trimming, waste removal and portable bathroom rental and service.

“To do it right takes some investment,” Miller said.

Some items would be donated. Greene County Parks and Trails has committed to providing five wooden shelters with benches, while the all-volunteer Yellow Springs Tree Committee has been approached regarding tree-planting on the property. A line of coniferous trees is envisioned for the portion of the park that adjoins Talus Drive, according to Lapedes.

Funds have already been raised for the dog park project, and those who wish to donate can do so through the Yellow Springs Community Foundation. The link to the dog park fund is: yscf.fcsuite.com/erp/donate/create?funit_id=3013.

A public meeting at the Gaunt Park site last Wednesday drew about 20 villagers. Most seemed enthusiastic for the proposed park, citing the benefits of allowing dogs to romp safely, and legally, off leash in a greenspace close to home. According to meeting participants, many villagers now drive their energetic canines to dog parks in Xenia, Fairborn and Springfield.

“It’s a great idea that’s a long time coming,” Pam Nicodemus, attending with new rescue pup Remmie, said in a later interview. She added that she plans to use the park, and join the association, if the project comes to fruition.

A licensed veterinary technician, Nicodemus acknowledged that vets are sometimes wary of dog parks because of dog injuries and disease spread that can occur there. But a well-managed dog park, such as the one envisioned for Yellow Springs, promises to head off such issues, she added.

That’s precisely the premise of the S.M.A.R.T. concept, Miller said. Clear ground rules, training for dogs and education for humans and the possible presence of a “dog park lifeguard” are a few of the ways that the park would promote safety for dogs and people, she added.

“Dog parks are good for dogs and good for communities,” Miller said.

Based on her extensive research into “dog friendly” communities around the country, which includes interviews with over 500 relevant stakeholders, municipalities that offer dog-focused amenities can see improvements in canine and human health, overall community safety, economic vibrancy and the humane treatment of animals. In our area, Miller has helped to create or improve three dog parks, as well as creating a “dog trail” in downtown Dayton.

It is unknown how many Yellow Springs residents own dogs, but the American Veterinary Medical Association estimates that about 40% of Americans are dog owners. The percentage is likely higher in the village, as suburban dog-ownership rates are closer to 60%, according to Miller.

While a Yellow Springs dog park would be geared to village residents, people from surrounding communities would also have access to the park. The local park would likely be free to users, with the option of joining the dog park membership association for a nominal annual fee. Exact fees and other details remain to be worked out.

“The best dog park for your community is the one that suits your community,” Miller observed at the meeting, adding that local values of inclusion and accessibility are guiding the development of the local park.

In attendance on Wednesday, Rudawski said she was optimistic this initiative would succeed where previous efforts had fallen through.

“They have the land, which is huge, and they have an expert who’s laid the groundwork,” she explained.

Though unsure if she will personally use the park — her own dog, Stella, is a “people dog,” she said — Rudawski remains convinced that a dog park is needed in Yellow Springs.

“The mighty dogs of Yellow Springs deserve a dog park,” she said.