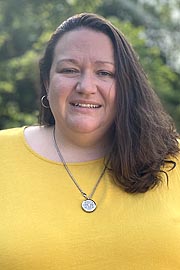 Candice Teague, the new fourth-grade teacher at Mills Lawn Elementary School, says she planned on becoming a classroom teacher for as long as she can remember.

“I always knew I was going to be a teacher,” Teague said in a recent phone interview.

“I was the kid who lined up all my stuffed animals,” playing school, she recalled, describing how she would stand in front of her pretend pupils — “I had a big easel” — going through lessons, reading aloud.

She seems to have come by her interest naturally, as both her mother and her mother’s father were educators. Her mother still is, working as a paraprofessional with third through fifth graders in the Centerville City Schools system. She was a school librarian during Teague’s childhood. Teague’s grandfather taught in a one-room schoolhouse in Hazard, Ky., after returning home from serving in the Korean War.

Teague was born in Kentucky, growing up outside Lexington before moving with her parents and brother to West Carrollton, southwest of Dayton, before her sophomore year in high school. After graduation, she matriculated at Sinclair Community College, finishing her bachelor’s degree in education at Wright State University. She went on to complete a master’s from Antioch University Midwest in 2006. Her teaching license, earned at the same time, is for K-8, with additional certification in science and language arts.

“It was education [studies] all the way through,” Teague said of her college and university path.

She found her first professional jobs working as a substitute teacher in schools across the Dayton metro area, with a number of extended long-term placements. But a full-time position in her own classroom eluded her. She worked for the past four years as a full-time paraprofessional in Centerville Schools, like her mother, though they were assigned to different buildings.

In the meantime, she and her husband, Joshua, settled in Kettering and began their family. Now married 15 years, they’re the parents of four children ranging in ages from 11 to 2.

“We have a busy household,” she said. Her husband is overseeing the remote learning of their older children at home while she instructs her new students online from her new Mills Lawn classroom.

Teague said she’s thrilled to join the Yellow Springs Schools teaching staff in part because the village has been a favorite place for her and her husband over the years. Glen Helen Nature Preserve has special significance, as her husband proposed to her there.

“I have gained so much knowledge working with other teachers, waiting for the perfect job,” she said. Her varied postings also gave her experience working with children with diverse needs and backgrounds, she said.

She also feels confident with the technological aspects of beginning the school year online. She said she worked with students remotely last spring, when Centerville, like all Ohio schools, closed by order of the governor in response to the COVID-19 pandemic. And, she added, technology has been part of her school experience since she was a kindergartener, when her class was part of a pilot project using new computers in the classroom.

She said that keeping students engaged “through the screen” is the biggest struggle with online learning.

Although the students are working from home, the teaching staff is working out of their individual classrooms. Teague said she’s glad to have that community of educators around her, especially as a first-year teacher with the district.

She is working in partnership with the other fourth-grade teacher, Vicky Hitchcock, who teaches math and social studies while Teague handles science and language arts. Teague was hired to fill the vacancy that arose after Carrie Juergens resigned this summer after four years with the district. Previously with Springfield Schools for more than 20 years, Juergens’ reasons for leaving the local district were not made public.

“I can do everything right by the books,” but still might not reach some students who relate better to another teacher’s approach or personality — who may better ‘catch that spark,’” she said.

Although Teague’s license allows her to teach from kindergarten through eighth grade, she said she’s happy to be among fourth graders.

“I love this age for reading,” she said, adding that she’s an avid reader who, before the time demands of work and family took over, typically read a novel a week.

“I love to see [students’] excitement in reading.”

A favorite book she likes to introduce to students is “City of Ember,” by Jeanne DuPrau. A science fiction novel published in 2003, and later made into a movie, the story follows a group of “12-year-olds trying to figure out what’s wrong with their city,” Teague said.

“These kids lead the way, and they change everything.”

Like PBL, the book “starts with a question: What’s wrong with the city?” Teague said. “And then the kids try to find the answers.”

In teaching fourth-grade science, the curriculum includes the study of energy, with a section on electricity.

Teague said part of her goal is leading students to consider “how we wonder about things.”

She tells her students that “Einstein had a wonder” that led him to discover fundamental scientific principles. “I like to pique their interests and have them start thinking, wondering,” she said.

She said she’s looking forward to the coming year and seeing what her students discover.

One Response to “Teaching reading, ‘wonder’ at Mills Lawn Elementary”