With the aim of supporting new voices, the Yellow Springs Arts Council will host a virtual art show highlighting the work of four up-and-coming area artists.

Overcoming the challenges of the pandemic, their artwork will be displayed in the YSAC Gallery, then filmed and available for viewing on Yellow Springs Community Access Channel 5, the Village YouTube channel, Facebook and the arts council’s website.

The show is part of the arts council’s new Emerging Artist Program, which took applications in January for its first exhibition this fall. According to an arts council brochure, “an emerging artist may be at the early stages of receiving recognition for his/her work but is currently under-represented through exhibitions that might bring their work to wider attention.”

The showcase will feature the works of four artists, three of whom are local: John Wehner, a photographer who sets out to show the beauty in everything and everyone; Angie Hsu, a new mother and ceramic artist who is concentrating on making useful art; Ryn McCall, an Antioch College student, poet and mixed media visual artist whose themes are born from a desire to make sense of the world; and Cheyenne Sandoval, a student at Sinclair Community College who has an obsession with patterns.

In interviews with the News this week, the artists shared how they are looking to balance their busy lives while still finding time to create art.

Cheyenne Sandoval, currently an art student at Sinclair Community College, creates art with charcoal, ink, tape, sharpies and paper. Cheyenne originally planned to be an English teacher and did not start creating art until after high school. 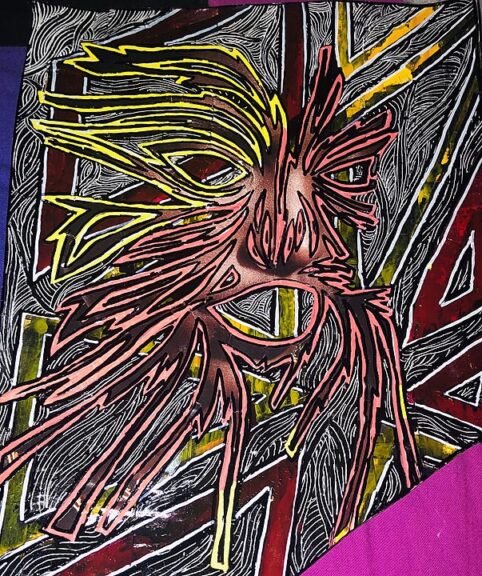 Cheyenne Sandoval’s drawing of a mask is a detail of a piece entitled “Mirrors.”

“My dad told me I should pursue what I really love in life,” she said, “because you only get to live once and you can always make mistakes in life but you can never really go back.”

Since then Sandoval has been trying a little bit of everything — collages and ink being her favorite things to create with. She has also been creating sculptures and ceramics and wants to get into photography.

“My goal is to try everything in art because I don’t want to be limited to one medium,” she said.

Sandoval says she doesn’t really plan her work ahead of time, but instead “just goes with the flow.”

“I spend a couple of weeks gathering supplies and then I just get started creating and follow the flow,” she said. “I think it’s just about letting it all flow out naturally.”

Sandoval’s drive is rooted in her family and her Hispanic and Native American identities.

“I want to be able to put my artwork out there and have my voice heard and be able to stand up for my community as well,” she said.

One of Sandoval’s current pieces is a comment on the current ills of society.

“It has a bandage over the mouth that says God bless America. I think with everything going on with Black Lives Matter and stuff it’s hard not to be influenced,” she said.

The Emerging Artists exhibition will be Sandoval’s first exhibit outside of school. For Sandoval, her art is her obsession and the current pandemic has only caused it to intensify.

“My parents had to make me stop working on art because I’m working all the time.”

Ryn McCall grew up in northern Dayton before spending most of their young adult life in Florida. In the past, photography has been their main medium of art. McCall’s experience working in restaurants was an inspiration for their early photography.

“It employs all of your senses to eat a meal and to prepare a meal,” they said. “I wanted people to experience it in a deeper sense, not just in one, like a two-dimensional realm of seeing it, but I wanted them to evoke feelings and memories.” 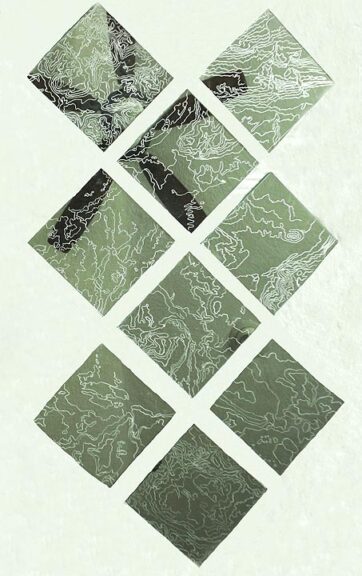 With this exhibit, McCall ventures into 3D and sculpturally based themes to explore ways to use whimsy and tactile objects to pursue meaning making and a sense of comfort in a rapidly changing world of isolation, they said.

As an emerging artist, McCall said the idea of an exhibition is a step in a different direction.

“I’m very much new to showing my art out in the world and not doing it just for me,” they said.

For McCall, allowing rough ideas to form by themselves while “holding the boundaries” is a big part of creating art. Creating has always been a very important part of who McCall is and how they process the world.

“I usually have a feeling or an idea. Then I attempt to rectify it with the real world and pull it out of my brain,” McCall said.

As an Antioch College student, McCall recently fell very deeply into their art while on co-op in rural Virginia. With the confluence of COVID-19 and the Black Lives Matter movement, McCall has been working to process the outside world through their art by continuing to “exist on the forefront of these ideas without numbing myself or pulling myself away from it.”

“We have so many tragedies that are overlapping in our world right now,” they said.

McCall views art as their place to explore life beyond the oppressive structures that the world has put on them.

“I think the responsibility of the artist is to take what they have and truly give it.”

John Wehner is a photographer from Wapakoneta, Ohio. Wehner began photography a little more than three years ago after the death of his father. After having kids of his own, he wished he had captured more moments with his father while he was alive.

“I lost my dad to cancer and my main focus getting into it was just to kind of capture the moment and things with my family,” he said. 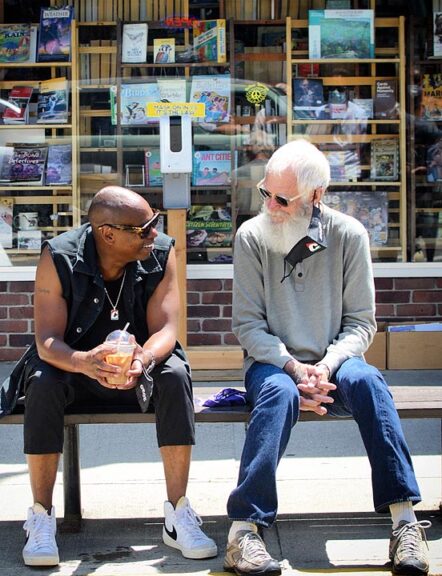 As an artist Wehner really likes working with old cameras, such as Kodak Brownies. He routinely fixes up old cameras given to him to give them a second life, before returning the favor by taking photos of the camera’s original owner.

For Wehner, knowing the family who used the camera years before gives him a greater connection to the art.

“It definitely kind of grounds you,” he said.

Wehner’s artwork to be displayed in the exhibit speaks about life during the pandemic. After being laid off, he was unsure of his direction before he decided to document this unique time.

“I was having a real hard time finding motivation at the beginning of this, being stuck at home,” he said. “Finally, I just said I’m going to see what everyone else is doing, kind of be a flower on the wall.”

Wehner began to travel to shoot backyard socially distanced music jams, a couple of car shows and a Black Lives Matter protest in Lima. He’s not shy about taking a photo; his shot of the “two Daves” — Chappelle and Letterman — sitting on a bench in downtown Yellow Springs quickly went viral.

Wehner’s lens has even captured presidential visits to Ohio.

“The process of a president coming to a small town, the whole theatrics … regardless of what side you’re on, is kind of amazing to see,” he said.

Wehner feels artists are very important to society, especially now, when many people are turning to entertainment to get through tough times.

“Without art this world would be a pretty bland place, especially during this time. You start to realize that art and artists are very important.”

Growing up in Colorado, Angie Hsu always loved working with her hands. She took her first ceramic class “just for fun” during her last semester of college. And it was her love of ceramics that eventually convinced her to settle in Yellow Springs.

After living abroad for most of her twenties, and returning back to the U.S., she and her partner spent six months driving around looking for a place to call home. They visited California, Seattle, Colorado and Texas before friends recruited them to move to Yellow Springs. 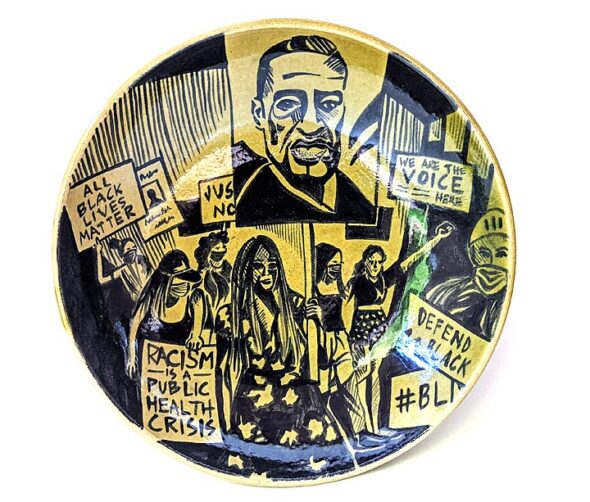 Local artist Angie Hsu’s plate, “She and They March,” will be featured in an exhibit at the Yellow Springs Arts Council gallery opening virtually this weekend.

“I had zero knowledge of Yellow Springs,” Hsu said. “My friend made a PowerPoint presentation about why we should live in Yellow Springs and the PowerPoint included the John Bryan Community Pottery center and Miami Valley Pottery.”

Hsu has gone through different phases of creativity in her life and explored various media. In her younger years, that included sewing clothes, binding books and carving spoons.  Hsu said she was fascinated about how crafts were developed in different eras, “when we had a reliance on making things ourselves because there wasn’t an option.”

“I have such an appreciation for all the art forms,” she said. “I really like the history of craft and crafts being used in daily life.”

Hsu finds it hard to call herself an artist and always defaults to seeing herself as a craftsperson. Since finishing college, she has worked in the nonprofit sector and has never worked, or trained, professionally as an artist. But she said she is pushing herself to embrace the identity of an artist.

Visitors to the virtual gallery will be able to view a tea set she created, which she calls The Corona Tea Set. The tea set is a game, of sorts.

“The idea came as a friend and I danced six feet apart, noting that holding opposite ends of a six-foot length of bamboo could mark the distance,” said Hsu. “COVID times don’t mean we can’t dance together or share tea.”

The tea set was inspired by the tea culture in which she grew up, with family from both Taiwan and China. Family members even owned a tea plantation. It was also a chance for Hsu to overcome a longstanding fear of making teapots, which she said intimidate her.

“The teapot, I feel, is a great technical challenge in pottery. There are so many parts and you need to fit them together,” she said.

Hsu has also begun making sake sets, which she says is a rare product in Midwest ceramic shops.

*The writer is a Miller Fellow for the News and a fourth-year Antioch College student majoring in hip-hop education.