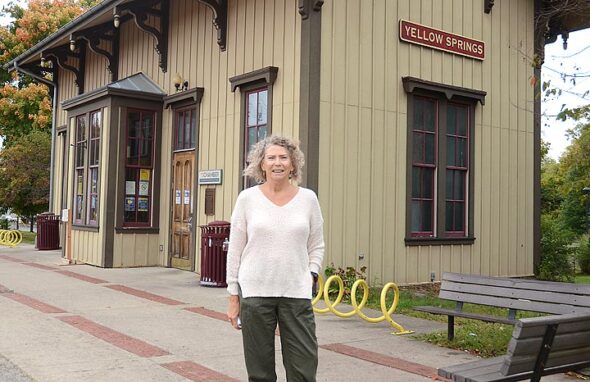 Karen Wintrow is leaving the community and her position as the executive director of Yellow Springs Chamber of Commerce, whose offices are in the village train station. She has held the post since 2007. (Photo by Megan Bachman)

A community leader who put Yellow Springs on the visitors’ map leaves her post this week.

After 13 years at the helm of the Yellow Springs Chamber of Commerce, Karen Wintrow will step down Friday, Oct. 23, ahead of a move to Greenwood Lake, N.Y., with her husband, Ted Donnell.

At the Chamber, Wintrow brought significant attention to Yellow Springs as a regional tourist destination and helped attract new businesses. She said her proudest accomplishment is that the village “has been recognized as being such a vibrant and vital community.”

“What we did was to unify the message, brand Yellow Springs and get the word out,” she said.

Wintrow also made an impact on the community as a three-term Village Council member who served as Council President for five of those 12 years, and as a board member on several other groups in the community and region.

Wintrow and Donnell now head to New York state to be near their son, Lucas, a 2010 Yellow Springs High School graduate. For now, Wintrow will work on the couple’s new house before diving into her next project.

In a recent interview with the News, Wintrow reflected on her time at the Chamber and in the village she publicized far and wide.

Yellow Springs does genuinely have a lot to offer, Wintrow believes, from its variety of downtown shops to its access to hiking trails and the bike path, and she promoted these attributes of the village, “everyone’s favorite place.”

“People are looking for these walkable communities, these quaint places,” she said. “You can tell by the way they built The Greene. Here we have it, but it’s authentic.”

Soon after she came on board, the Chamber upgraded its website, started publishing visitor’s guides and utilized public relations to spread the word. It quickly paid off. In 2008, Budget Travel listed the village as one of the 10 “Coolest Small Towns in America,” followed by a 2010 designation as “Best Small Town” by Ohio Magazine. And, in 2011, it was a finalist for “Most Fun Town” in a national contest of 30 towns sponsored by Rand McNally and USA Today.

By strengthening its destination economy, Wintrow believes the village was able to adjust to the loss of several large employers. Between 2004 and 2012, hundreds of jobs were lost due to the closure of Vernay and Creative Memories (formerly Antioch Publishing) and the temporary closure of Antioch College.

“A lot of communities couldn’t have come close to surviving that,” she said.

The years between the closing of Antioch in 2008 and its reopening in 2011 was a particularly worrisome period for downtown merchants, Wintrow recalls.

“It was so hurtful and demoralizing and scary,” she said. “We were there to help and pick up the pieces, and for a lot of businesses, there wasn’t as much decline as they were expecting.”

The village was able to pivot to an economy based on visitors and produce enough revenue to sustain the community, Wintrow said. In 2018, the Chamber calculated the annual revenue to the community of the destination economy at $16 million.

Wintrow also credits Yellow Springs’ rise as a popular tourist destination to the Chamber “embracing Young’s Dairy” in its promotions, and the “lucky” openings of Yellow Springs Brewery, in 2013, and Mills Park Hotel, in 2016.

This summer, Wintrow said, it was Dave Chappelle’s comedy shows in Miami Township that boosted business at local shops, while the town’s regular visitors seemed “anxious” to get back to the village after the coronavirus-related shutdowns.

“It didn’t take long for people to come back,” she said.

Wintrow was also instrumental in bringing some new businesses to the village. She fielded the first call from a representative of Cresco Labs in her Chamber office, and said she “got the ball rolling” on the marijuana grower’s 2017 move to the village, which has so far yielded more than 60 new jobs, with about 10% filled by locals.

In 2016, she helped bring DMS Ink, a mailing services company, to the former Creative Memories facility, and with it 40 jobs, many of which migrated from its Dayton headquarters. DMS Ink was subsequently acquired by Cincinnati-based Graphic Village. The initial contact was passed on to Wintrow through the Greene County Department of Development.

“A lot of the regional entities saw me as the economic development person since the Village didn’t have one,” Wintrow said.

Wintrow moved to town in 1995 with Donnell, an architect, and their young son, Lucas. An interior designer by trade, within a few years, Wintrow was recruited to join the Children’s Center board, followed by the Antioch School board, where she served as president for five years.

“On the heels of that, I ran for Council,” Wintrow recalled. That was in 2005, and she remained on Council through 2017.

Wintrow first got involved with the Chamber through its board of directors. She was the board president when she was tapped to be the project manager of the Men’s Group’s multi-year Community Information Project, an effort at ramping up external communication about the village. As a result, Wintrow was “essentially acting as a second staff person” in the Chamber office in 2007, when the Chamber’s then lone staffer, Adrienne Chesire, resigned. It was then that Wintrow was asked by the board to take the full-time staff role.

“It happens all the time on nonprofit boards,” Wintrow said of the move from the board to a staff position. “It was natural.”

The Community Information Project’s visioning work led to the creation of the tagline, “Find Yourself Here” and its marketing efforts continued under the auspices of the Chamber.

Wintrow also set about expanding the Chamber’s role in the town’s economic growth. Prior to her tenure, the Chamber largely focused on the twice-annual Street Fair, which was the Chamber’s main source of funding.

But Wintrow also enlarged Street Fair significantly, and boosted its revenue-generating potential by adding sponsors, she said. That led to the hiring of a second staff person just to organize Street Fair. Alexandra Scott is moving from that role to the Chamber’s interim director with Wintrow’s departure.

Finally, Wintrow expanded the membership rolls of the Chamber, in part by accepting businesses that are not located in Yellow Springs. She said that there was interest in outside companies joining the Chamber either because Yellow Springs “is a market they want to operate in,” or because they wanted to access the Chamber’s member benefits, such as its worker’s comp program. In all, those businesses helped underwrite the Chamber’s work.

“Most members are coming for the benefits we offer,” she said.

Currently there are 336 Chamber members, 196 of which are based in Yellow Springs and Clifton.

To Wintrow, the work of “selling” the village was easy because it had so much to offer, from its mix of restaurants, to its affordable gifts, to its people-watching.

“Everything here is accessible, it’s not snooty or high brow or pretentious,” she said. “There’s always something to see. All you have to do is look around.”

As for attracting businesses, that was more difficult, in part due to the limited available space in the community. With few opportunities for industrial or large commercial businesses and scarce downtown retail spaces, Wintrow sometimes had a hard time accommodating businesses that reached out to her.

For most of Wintrow’s time as the Chamber’s director, she was also a Council member, dual roles that she felt “went together well.”

“There were people who questioned it, but I don’t think [the roles] are at odds,” Wintrow said.

In the end, Wintrow feels that her efforts to promote Yellow Springs have boosted the local economy without sacrificing the values of the town. Asked if Yellow Springs’ growth in tourism has changed the village, she said she didn’t think so. Instead, the Chamber has promoted the village “on its own terms.”

“I think we’ve still maintained the essence of the values that we have,” she said. “We haven’t lost those environmental values, those human values, those values of diversity, of caring for people and wanting to be inclusive and welcoming. I don’t feel, at the heart of it, that we’ve lost that desire.”

The future of Yellow Springs after COVID-19, however, is a source of concern. She wonders if the town will grow fast enough to “sustain the community” while avoiding the tipping point “where too much is too much.” But she is optimistic because, well, it’s Yellow Springs.

“Yellow Springs is so different, there is just nowhere else like this,” she said.