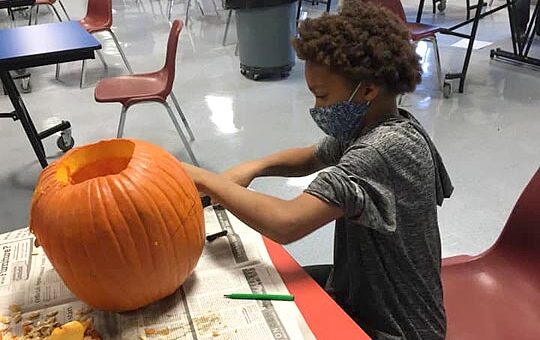 “I love this program.”

Founded by high school intervention specialist Donna Haller, and initially launched in January 2019 under the auspices of the area Big Brother Big Sister organization, the local group struck out on its own and formed a governing board of trustees that summer.

“It’s been growing ever since,” according to board President Lake Miller, who signed on with the group as a mentor before taking on a leadership role with the board.

Despite the organization’s growth, Miller feels the program remains “a well-kept secret” in the community.

At its heart, VIP matches local young people with adults in the community to form supportive relationships through individual or group activities, service projects and fundraisers.

“It’s all about community,” founder Haller said in a recent phone call.

The VIP motto, “Changing our community two people at a time,” bears out that focus.

“The kids are the VIPs,” Haller asserted

About 30 matches are currently participating in the program, and there’s always a place for more, Haller and Miller both said.

Clouse-Taylor, who is paired with high school history and government teacher Hannah Weinstein, said she looks forward to the time she spends with her mentor.

“It’s always good to have that extra person there that’s older than you and has been through the stuff you’re going through,” she said in a recent phone call.

The two try to get together every week, she said, in recent months taking COVID-related precautions into account. One recent activity was tie-dyeing face masks.

“We always do fun activities together,” Clouse-Taylor said. Nature walks, going out to eat and craft-making are among the ways they spend their time.

She also looks to Weinstein for homework support, noting an additional benefit of having a teacher as her mentor.

“She kind of helps me stay motivated for school,” Clouse-Taylor said of Weinstein.

For her part, Weinstein says she also loves the VIP program and treasures her time with Clouse-Taylor. In a recent News visit to the high school for another story, the teacher was found in her classroom wearing one of the tie-dyed masks she and her VIP had made together.

Clouse-Taylor noted that the two have similarly high energy levels.

“It’s nice to have someone on the same page as me,” she said.

Haller said the program makes a point of pairing mentors and students according to their interests, needs and characteristics — like energy level.

“It’s given Sophie an additional adult who cares about her and can show that caring in different ways than a parent,” Clouse said. “It gives her another trusted adult’s point of view and perspective.” 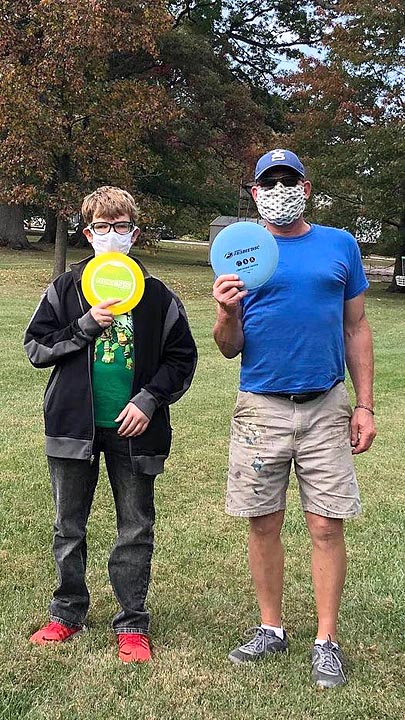 Local teen Nathan Burk and villager Todd Kreeger are building a relationship through the Village Impact Project, a youth mentoring program that currently supports about 30 pairs of students and mentors. The pair, who like to get around town on Kreeger’s golf cart, enjoy outdoor activities like biking and disc golf. (Submitted photo)

Miller, who works in youth programming for a diversity and inclusion nonprofit in Dayton, said he believes mentoring programs are invaluable.

Interactions don’t have to be complicated, he said. A regular phone call, or touching base after “milestone moments,” like the first day of school, can make a difference.

“For children to have an adult reaching out, who wants to know how something went or know they’re OK, that has so much effect on somebody’s life.”

Angela Williams, whose 15-year-old son, Nathan Burk, is paired with Todd Kreeger, said in a recent phone call that the program “has been a really good thing” for her son.

“He feels that if he has a problem that he can’t take to mom or dad, he can talk to Todd.”

“We talk often,” Burk said, describing his mentor as “nice” and “pretty cool.”

Kreeger, in a separate interview, said he feels “regular communication is key” to building and sustaining a good relationship.

“Text messages and phone calls are crucial,” especially amid the current pandemic, when daily life is changed and getting together is more difficult, he said.

Kreeger, who left a longtime career as a contractor and tile layer five years ago to become a teacher at Nightingale Montessori School in Springfield, said one of the most important things a mentor can do is “always let [the child] know you’re there, and you’re thinking about them.”

He and Burk still find ways to get together, despite COVID. Some favorite activities include playing disc golf on the local school grounds and riding in Kreeger’s golf cart. Burk said he especially enjoys go-carting.

Kreeger, who is also on the VIP board, said being part of the program brings his life joy.

“What makes me feel good is when I make someone else feel good,” he said.

Mentor Art Boulet, who works at the WYSO radio station, said he is thinking about the future as well as the present in developing a relationship with his VIP, Eric Thomas. Having recently turned 8 years of age, Eric is the youngest student in the program, which is open to all grade levels.

“Maybe I’m a dreamer, but I like to think about the history we’re going to have together after 11 years of this relationship,” said Boulet, who with his wife has a 5-year-old daughter.

Because of his young age, Eric doesn’t have an email address or cell phone, which makes keeping in touch a little more difficult than with older kids, Boulet said. But he connects through Eric’s mother, and the pair try to do something together at least every other week. Before COVID hit, they met weekly.

“I pick him up at 4 and drop him off after dinner,” Boulet said. They might go for a hike in the Glen, now that the nature preserve has reopened, followed by pizza at Bentino’s and ice cream at Young’s.

“Being able to be involved in someone’s life, and the fact that it’s a child from the village, that’s a no brainer for me,” Boulet said.

Statistics gathered by the Big Brothers Big Sisters organization bears out the positive impact that mentoring programs have:

According to BBBS figures in 2019, children with a mentor were:

• 52% more likely to stay in school and graduate,

• 46% more likely not to use illegal drugs, and

• 27% more likely to stay away from alcohol.

They also reported seeing an over 80% improvement in academic performance and a general improvement in personal relationships, with 92% of the youth describing better connections and trust with the adults in their lives and 90% feeling more socially accepted by their peers.

The former monthly group activities — such as attending sporting events and local festivals — have been curtailed, but the organization is looking at other ways to get out together, including small group farm visits and individual bike rides.

“I think the small community works really well with us,” Haller said, noting the way businesses and individuals have come forward to support the program.

“I cry all the time,” from happiness, she said. “I knew this town was great, and people have really shown their true colors. I put a call out on Facebook early in the spring looking for a bike for a child without one, and by the end of the week we had eight,” she said. Then Chris Worrell of Black Pug Bike Repair made sure all the bicycles were in good working order.

“For background check reports, I had to have a locked file cabinet. I put it out on Facebook and someone brought me one. Every step of the way, people have given, given, given.”

Local businesses also support the program with coupons and donations. The project is also building a sort of lending “library” of sporting equipment, such as balls and frisbees, so participants have access to a range of activities.

Haller said that the community’s generosity and support isn’t lost on the students.

“The kids have got to feel it,” she said.

“Imagine the whole community if the kids who wanted or needed a mentor had one — the security they would feel. … It could change their lives and the life of this town.”