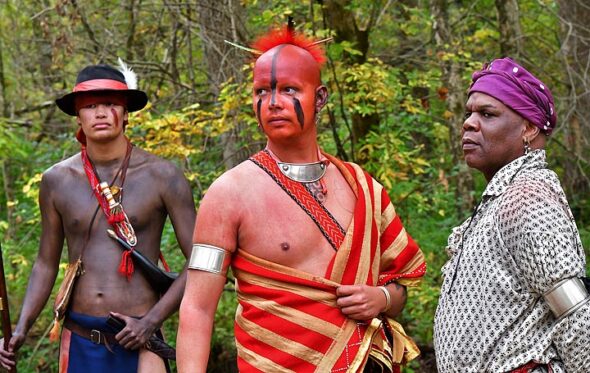 Villager Kane Stratton is debuting a film vignette, “Caesar’s Redemption,” this Thanksgiving. Pictured during filming of the local historical drama with a largely Shanwee cast are, from left, Noah Proctor, as Tarhe; Talon Silverhorn, as Shawnee war chief Blue Jacket; and Vince Moorman, as the title character Caesar, a formerly enslaved person who escaped bondage and joined the Shawnee in southwestern Ohio. (Photo by Kathleen Galarza)

Local history is coming to life — virtually yet vividly — this Thanksgiving.

Local playwright Kane Stratton is debuting an eight-minute film vignette drawn from a longer script that explores the life of a Black man named Caesar, a “maroon” among the Shawnee people of southwestern Ohio in the 1770s and beyond.

A “maroon” is an old term for a person who escaped slavery and found themselves among Native people, sometimes joining Native tribes, Stratton explained.

In the case of local historical figure Caesar, the formerly enslaved man escaped bondage in Virginia, made his way to Ohio and became a member of the Shawnee around 1770, learning their language and serving as an interpreter. Caesar is the namesake of Caesar Creek — originally Caesar’s Creek, Stratton notes — as well as two area parks, Caesar Creek State Park and Caesar Ford Park.

Caesar may be geographically remembered, but his life is otherwise forgotten, according to Stratton.

“Most people don’t know about him,” he said.

On the other hand, nearly everybody in this part of Ohio knows something about Blue Jacket, the Shawnee war chief who fought vigorous campaigns against white seizure of Native land. A popular outdoor drama about his exploits was performed for nearly 30 years in Caesar Ford Park in Xenia, part of Greene County Parks & Trails. Stratton remembers loving the play as a child — and only later, as an adult, recognizing its historical and cultural errors.

“As a kid I didn’t know any better — it was just great theater,” he said.

But Stratton grew up to realize that the play’s depiction of Blue Jacket as a white man who had been captured by the Shawnee was false, among other historical inaccuracies. When the outdoor performances ended amid dwindling popularity and other issues in 2007, a plan took shape to launch a new theater company and return local historical dramas to an outdoor stage.

“The story is gone, but the history shouldn’t be gone,” Stratton said.

That plan is slowly being realized, with the recent restoration of a 1,400-seat amphitheater by the county parks department and a series of play readings offered in 2019 under the auspices of theater company Caesar’s Ford Theater, run by Doug Haney and others.

Just as the revival was gathering steam, the coronavirus pandemic hit, and the 2020 performance season was canceled. Now, in place of live plays, the theater group is pivoting to filmed excerpts of outdoor dramas, shared online.

Stratton’s play, “Caesar’s Redemption,” which he wrote, directed and produced, is the first film vignette to be developed. Two more are planned, one about Buffalo Soldier Col. Charles Young and the other about poet Paul Laurence Dunbar.

Filmed at Caesar Ford Park over the course of two days last month following about a dozen Zoom rehearsals, “Caesar’s Redemption” came together with surprising smoothness despite pandemic-related obstacles, according to Stratton.

“It couldn’t have gone any better with the challenges of COVID hanging over us,” he said. Area production company d5 Pictures did the filming.

The filmed portion of the script centers on a tense, emotional scene between Caesar and Blue Jacket. Caesar and white settler Simon Kenton have been captured by the Shawnee — Caesar under suspicion for having betrayed the Shawnee, his adopted people, by helping Kenton. Blue Jacket confronts the ostensible traitor, and in the face of the Shawnee leader’s accusations, Caesar reflects on his life and equivocal status.

“What are you?” Blue Jacket demands.

“I am a man,” Caesar answers. He later adds, “Will you see me as such? Or am I just a Black man marooned out here in the Shawnee wilderness?” 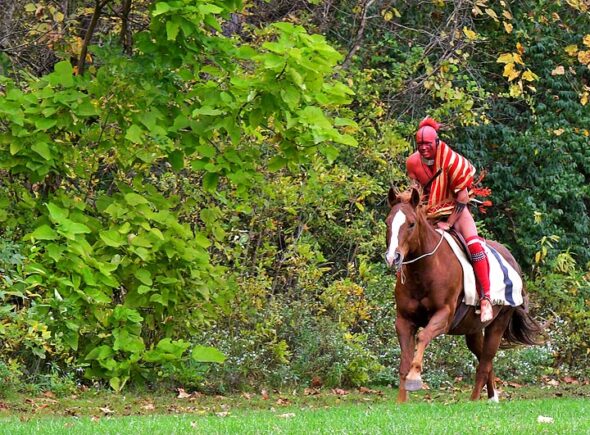 Such tensions and questions around identity appeal to contemporary audiences, Stratton believes, adding that he chose Caesar as the main character, played by area actor Vince Moorman, to explore these issues. Caesar crossed multiple boundaries and cultures, survived trauma and sought both freedom and a sense of belonging, according to Stratton, who has pieced together the figure of Caesar through a series of small references in area historical records.

“He crossed over a cultural barrier and started a new life,” Stratton reflected.

Another kind of identity question surrounded the making of the film. One of the major shortcomings of the former Blue Jacket play, adapted from a children’s book by white novelist Allan Eckert, was the misrepresentation of the Shawnee. Stratton, who is white, was determined to do better — to bring Shawnee people into the project as actors and advisors.

“I’m fully committed to representing the Shawnee and Native peoples with their voice involved in the process,” he said.

The film’s cast of 11 includes numerous Shawnee actors. Blue Jacket is played by Eastern Shawnee interpreter Talon Silverhorn, who works as a historical re-enactor at Colonial Williamsburg in Virginia. And Stratton engaged Jeremy D. Turner, a Shawnee Tribe member and re-enactor, to edit the script for historical and cultural accuracy. Turner also plays a small part in the film.

According to Turner, cultural representation is an issue of profound importance to the Shawnee, who have been harmed by false narratives that distort history and promote stereotypes.

As Turner relates it, Shawnee history is complex and turbulent. With their homeland in the Ohio River Valley and tracing their roots back to the mound-building cultures of Fort Ancient, the Shawnee began to disperse with white contact, though many remained in Ohio to fight the encroachment of white settlers. In the 1830s, the Shawnee were forcibly removed to lands west of the Mississippi under the Indian Removal Act. Today, three Shawnee reservations exist in the western and northeastern parts of Oklahoma.

While modern-day Shawnee people are “alive and well,” their absence from Ohio opens the way for misguided and even fraudulent portrayals of their history, according to Turner. Efforts are underway to reclaim ties with Ohio and reassert Shawnee culture and identity, he added.

Turner quoted a Shawnee saying that guides such efforts: “Nothing about us without us.”

While a piece of historical fiction, “Caesar’s Redemption” embraces that principle. By design and through careful collaboration with Shawnee interpreters and experts, the film offers many accurate details of Shawnee culture, including clothing, music and language, according to Stratton.

Turner agreed. “People actually get the real history told visually and through hearing the language,” he noted.

Turner said he is particularly excited by the film’s use of the Shawnee language, which today is only spoken fluently by about 20 individuals, though many others have conversational competence or know a few words. A major push is underway among Shawnee groups to revitalize use of the language before the last fluent speakers are gone, Turner added.

“This is a critical time in the history of the Shawnee language,” he said.

Benefitting from the involvement of Shawnee speaker and language consultant George Blanchard, the film vignette is a small part of that push, offering audiences a chance to hear the texture and timbre of the language, with English subtitles, rather than made-up or inaccurate words.

To Stratton, hearing and seeing his script transformed by his Shawnee collaborators was an awe-inspiring experience.

“They allowed me to see it — they created what I had envisioned,” he said.

Stratton hopes to eventually produce a full-length “Caesar’s Redemption” outdoors and in person at the Caesar Ford Park amphitheater. Until then, local audiences can access the film vignette at the Caesar’s Ford Theatre Facebook page beginning on Nov. 26. And those wishing to support the overall effort to restore live outdoor performance to Caesar’s Ford Theatre can access the group’s GoFundMe fundraising page from its website, caesarsford.com.