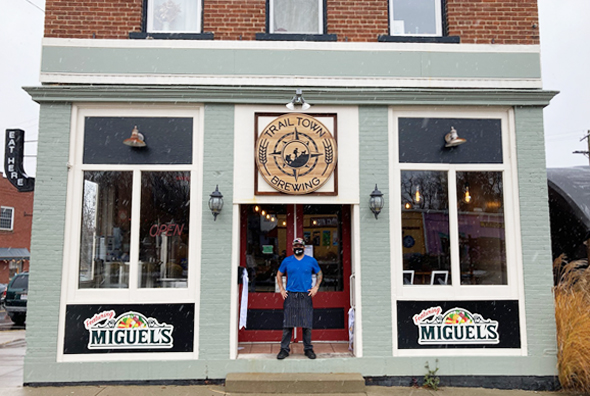 During last Monday’s flurries, Miguel Espinosa briefly posed outside the future brewpub Trail Town Brewing, which houses his new kitchen. The official opening was on Black Friday, Nov. 27. No longer serving just tacos, burritos and bowls, the brick-and-mortar Miguel’s offers a much larger menu than his food truck did, featuring additional Mexican cuisine along with innovative culinary specials of Espinosa’s own design. (Photo by Reilly Dixon)

Walk behind Asanda Imports into Kings Yard on a bright and sunny Saturday afternoon in the summer, and you’ll find a throng of people clamoring around the Miguel’s Tacos food truck, hands cupped around burritos or holding a tray of tacos.

On Black Friday, Nov. 27, Espinosa and a team of his employees cut the ribbon to the location of Espinosa’s new culinary digs: 101 Corry St., the future home as well of Trail Town Brewing.

“I mean, it’s a dream come true,” Espinosa said in an interview this week. “To be in a kitchen this big makes a huge difference. I can do so much more.”

Espinosa’s new menu attests to that. In addition to the bowls, burritos and tacos he sold out of his food truck, Espinosa and his team are now whipping up fish tacos, tostadas, taquitos, quesadillas, nachos and more.

At present, Espinosa’s food truck is closed. Espinosa said he may return to doing business out of it in the future, but for the time being, he relishes the opportunities the larger kitchen affords.

Given the wider and more diverse array of still-predominantly Mexican food, Miguel’s Tacos has been redubbed as something a little simpler, more encompassing. It’s now just Miguel’s.

But it isn’t just Espinosa working at Miguel’s. Espinosa now has a crew of seven employees helping him run the restaurant by taking food orders, seating tables and helping him in the kitchen. Taken together, this additional labor force, alongside the larger cooking space and an assortment of new culinary appliances — such as a larger grill, a fryer, a walk-in cooler — frees up Espinosa to experiment a little more in the kitchen.

“I’m ready to get creative,” Espinosa said. “Before moving into this bigger kitchen, I felt like I couldn’t innovate as much as I would have liked to. I was always too busy, and I was always too cramped [in the food truck].”

This culinary innovation will likely take the form of regular daily specials — food that may extend beyond the boundaries of Mexican fare.

For instance, on opening day, this reporter tried that day’s special, which had a Japanese influence: a hot tray of six pieces of yellowtail sashimi, torched and topped with a chipotle aioli, pico de gallo and a jalapeño ponzu sauce.

According to Espinosa, this experimentation is just the beginning. He said that he intends to roll out new menu items and specials on a regular basis.

Born in Mexico, Espinosa came to the U.S. in his youth and moved Yellow Springs area with his family in 2016. Last year, the community rallied around Espinosa after he faced legal consequences due to his undocumented immigration status, raising money for his legal expenses and writing letters of support to an immigration judge. This week, Espinosa said that he is currently has a temporary work permit as well as a driver’s license, and that he is in the process of securing his green card.

The future for Miguel’s holds more than just food. Before long, a new brew pub, Trail Town Brewing, will commence its operations alongside Miguel’s. In its totality, the restaurant will be a shared space for the two businesses — Espinosa preparing food in the back and beer brewed onsite and poured in the front.

Owned by Jake Brummett, who also owns Wander and Wonder in Kings Yard, and who lives in Waynesville, Trail Town Brewing has been in the works for nearly three years. Brummett began leasing the commercial space of 101 Corry — which includes the kitchen, back patio, front dining room and side “greenhouse” room — in January 2018, shortly after the Peruvian-themed Williams Eatery moved out.

The teaming up of Espinosa and Brummett was set into motion not long after Brummett moved in.

“He seemed like a good fit,” Brummett said. “People love him and his food, and this whole project is all about promoting and supporting local folks.”

At the time, though, Espinosa wasn’t ready to take the leap. He said he still wanted to focus on his food truck. But, after a couple years, Brummett and Espinosa struck up their dialogue once again.

“After thinking about it for some time, I thought, ‘You know what? I’m ready to do this’,” Espinosa said. “And here we are now.”

The agreement, as it currently stands, is that Espinosa rents the kitchen space from Brummett. 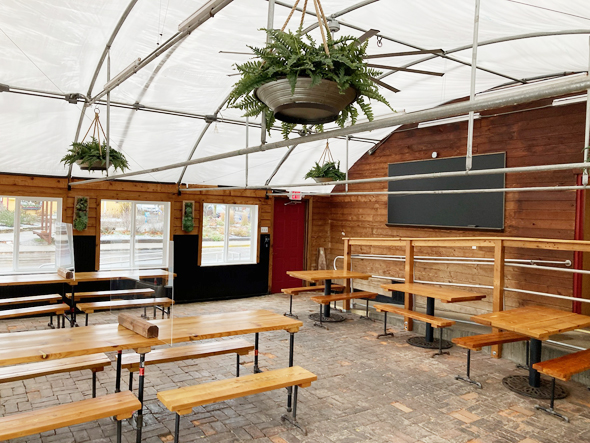 Pictured is the side dining area of Trail Town Brewing/Miguel’s, “the greenhouse.” Due to COVID-19-related safety measures, there are currently seven spaced-out seating areas for customers, and the restaurant’s total capacity is 38 people. The dining area is adorned with local artwork and greenery and is an airy space to dine on Espinosa’s Mexican fare — and, one day soon, a beer brewed by Trail Town Brewing. (Photo by Reilly Dixon)

Since 2018, Brummett has dramatically renovated and remodeled nearly every inch of the space to accommodate his business plan. The front room of the restaurant features a newly finished bar that winds around the entryway. Made from salvaged wood by the late local woodworker Paul DeLaVergne, the bar sits in front of 10 tap handles on one side, and on the other side, four large fermentation vats. These vessels will produce the bulk of the brewpub’s beer to be served in-house.

“I’m looking at making different IPAs, stouts, porters, a Mexican lager and a whole lot more,” Brummett said. “Once I get some staples, then I can start branching out into different beers.”

The dining room to the side of the bar room is situated under a large, insulated canopy. Seven wooden tables, each one seating two to four people, sit atop the old brick floor. Ferns and assorted succulents adorn the well-lit dining area, and locally made artwork is interspersed throughout both this and the front dining areas. Currently, the dining capacity is 38.

It’s easy to imagine customers milling about the restaurant with a pint in one hand and a burrito in the other. And that’s the grand plan as Espinosa sees it: both he and Brummett will run their businesses separately, yet symbiotically with the other.

This business model may seem unorthodox to some, but Espinosa believes it will be a success.

“I don’t think it was a risky decision at all [to work alongside Brummett],” Espinosa said. “I know we’ll be successful together.”

According to Brummett, Trail Town Brewing still has some time before it can begin its operations — both brewing and serving its beer. Brummett said he’s still waiting on a state license to brew his own beer.

As for the food truck, Espinosa said he intends to return to doing business out of his former, smaller kitchen, but only once his restaurant operations have stabilized.

He added that he would like to continue catering local events out of his food truck. This past summer, for instance, Miguel’s Tacos catered over 50 of Dave Chappelle’s outdoor comedy performances. With Chappelle likely hosting more performances in the coming summer, Espinosa imagines he will again be asked to cater those events.

If the crowds at the opening weekend for Miguel’s are any indication, the venture will be a success, the owners said. Espinosa said that the first two days of business brought in over three times the number of customers he would have been able to serve out of his food truck. On Saturday, Nov. 28, the second day of operation, a line of customers waiting to order food wrapped around the side of the building. Espinosa said the restaurant reached its capacity twice that day.

“The food was definitely worth the wait,” said Jessica Thomas, a villager and longtime Miguel’s Tacos patron. Thomas got a quesadilla al pastor on Saturday.

According to Thomas, the weekend staff did a good job of both meeting the needs of the crowd, and maintaining COVID-19-related safety measures.

“I really appreciated the candid nature of the staff as they reminded guests of COVID precautions and invited folks to wait outside to maintain social distancing,”  Thomas said.

“As a longtime supporter and friend of Miguel’s, his new items didn’t disappoint,” said Truitt, who has already been to the new restaurant several times.

“The tostadas, quesadillas, homemade guacamole and taquitos were all excellent,” he said. “They were a nice change of pace from the otherwise delicious tacos and burritos I’ve always gotten from him.”

Maranda Bingaman, one of the front-of-house employees, said that the opening weekend was exhilarating and rewarding.

“One customer from this weekend said that the food he got here was the best he’s had since he’s lived in Ohio,” said Bigaman, who began working for Espinosa out of his food truck eight months ago. “Hearing that kind of feedback is always rewarding.”

“It was kind of hectic at times, but very exciting,” she said. “We’re still learning and getting better every day. The adjustments we made and the lessons we learned from this weekend are already being applied and it’s making a huge difference.”

Miguel’s is open Monday through Sunday, 11 a.m.–8 p.m., and offers both dine-in and carry-out options.

One Response to “Miguel’s moves into future brewpub”