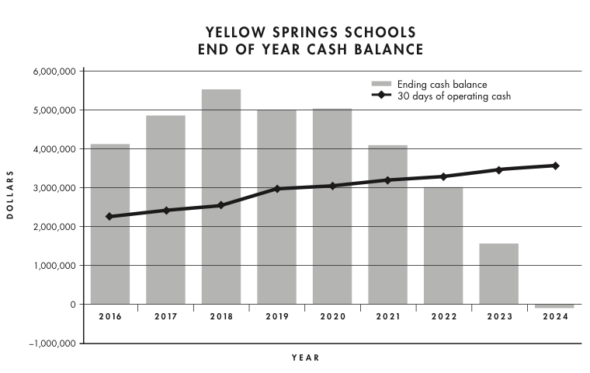 A graph prepared by Yellow Springs Schools Treasurer Tammy Emrick, and presented to the school board as part of her most recent five-year financial forecast, shows a line for revenues and another for expenditures that cross in 2019, indicating the start of deficit spending, go in separate directions before coming back together in 2020 amid the pandemic, and then grow further apart each subsequent year with expenditures continuing to rise while revenues remain relatively flat.

With the expectation that the district will be going to voters for more funds in the form of a facilities bond levy in late 2021, Treasurer Emrick presented the annual five-year financial forecast during the school board’s most recent regular meeting Thursday, Nov. 12.

Prepared, as it is each fall, and updated in May for submission to the county auditor, the current forecast shows a widening gap between revenues and expenses, with the district’s cash balance going under the desired 30-day operating balance in fiscal year 2022, and then falling into the red by fiscal year 2024. Each fiscal year runs July 1 through June 30.

“We’re going to have to work at our expenditures and do what we can to save more where we can,” the treasurer said.

A graph prepared by Emrick and presented to the board showed a line for revenues and another for expenditures that cross in 2019, go in separate directions before coming back together in 2020, and then grow further apart each subsequent year. While the revenue line remains relatively flat for the next few years, between about $9.5 million and less than $10 million, the expenditure line rises from less than $10 million in 2020 to nearly $11.5 million in 2024. 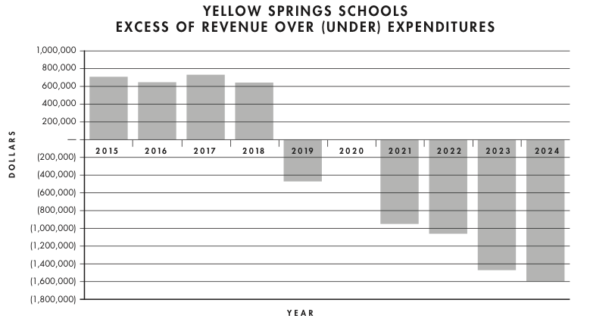 With a widening gap between anticipated revenues and expenses, the school district’s cash balance is projected to fall under the desired 30-day operating balance in fiscal year 2022, and then drop into the red by fiscal year 2024, ending that year with a negative balance of more than $74,000, according to the five-year financial forecast prepared this fall by Yellow Springs Schools Treasurer Tammy Emrick.

Emrick explained that revenue sources include property taxes, which she said constitute about half of the district’s income; income taxes (about 17%), state funding (15%) and various local sources, including tuition and open enrollment payments (18%). She noted that open enrollment brings in about $1 million a year.

She reported that while property tax revenue has continued to increase, current collections are running about 3.76% behind projections this year, a circumstance she attributes to pandemic-related delinquencies in tax payments. While property tax revenue increased by nearly $170,000 (over 4%) in fiscal year 2020, she anticipates an increase of only about half that, nearly $36,500 this year. She expects that the following year will see a return to last year’s climb due to the recent property reappraisals. According to Greene County Auditor David Graham, the district will see an estimated $450,000 more in property tax revenue each year after the new appraisal, which takes effect in January.

Emrick noted that the district’s largest expense is employee salaries and benefits, which she said is to be expected for a service organization. She has said in the past that up to 80% of expenditures going to salaries and benefits is considered healthy for most school districts. Yellow Springs is at a little over 78%, according to Emrick’s report.

As for benefits, after a 17% increase in health insurance premiums last year, staff made changes in their medical insurance so that the anticipated premium increase of 7.5% for fiscal year 2021 would decrease to 3%, according to Emrick, who has factored in a 7.5% increase for future years.

Additional district expenditures include purchased services (16%) and supplies and materials (about 2%).

Emrick ended her presentation by noting that the district is projected to end with a deficit the same year the two emergency levies are set to expire, fiscal year 2024.

The board did not discuss the forecast, but President Conn noted: “Those are the kinds of graphs that the board loses a certain amount of sleep over when we see them.”

“You’re right, we have some time to plan for this, but you’re also right that time can pass more quickly than we anticipate,” he told Emrick, referring to a comment made by the treasurer earlier in the meeting. “I look forward to your leadership in how we plan to make those two graph lines [revenues and expenditures] come closer together,” he added.

Other items from the school board agenda will be in next week’s News.