Thought for Food— A pork pie for the anxious

It’s been a while since I’ve sat down to write a column for the News. 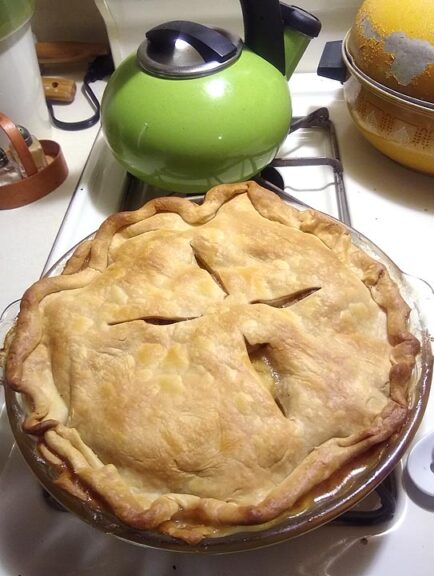 This is partly because we have some new and incredible voices who are filling this space with powerful words every month — if you haven’t yet checked out “Little Thunders,” “The Briar Patch” or “The Village Mouse,” I encourage you to do so; a few of them can be found on our website.

It’s also partly because it’s just felt like a difficult thing to do. The last column I wrote was right at the beginning of the pandemic, and my naivete at the time led me to hope that there was no way I’d still be livin’ that COVID life, lo these many months later.

Yet here I sit, in December 2020, still wearing the clothes I put on two days ago. It’s 6:30 p.m. and feels like midnight. My daughter is dictating her daily reading log for online school to me so that she doesn’t have to spend an hour typing it up because she’s 10 and doesn’t really know how to type yet. I’ll probably be up half the night finishing my own work. I’m chewing the sleeve of my sweatshirt and wondering if it’s worth the risk to visit my parents and sisters at Christmas. It’s likely that I won’t remember to brush my hair tomorrow.

As “The Mandalorian” might say: This Is the Way.

So what do all of you do with your Capital-A-Anxiety in these trying times? Everybody has their own little tips and tricks. Mine is to watch YouTube videos of people speaking calmly about any number of topics: hair and makeup, medical procedures, cross-stitching. The topic is often irrelevant — what matters most is that the person speaking, for the 10 or 15 minutes that they’re on screen, is confident and happy about whatever it is they’re doing.

One of my favorite channels is “Townsends,” hosted by Jon Townsend of Indiana. Off-camera, he and his family own and operate a store, Jas. Townsend & Son, which sells 18th-century replica clothing, outdoor gear and cookware. On camera, Jon teaches his viewers about 18th-century cooking.

On Tuesday, Nov. 3, I was feeling especially anxious. My husband had left before what an old friend of mine would have called “the buttcrack of dawn” to work the polls at Antioch Midwest, and I was on duty to help my daughter navigate her online school day. At the same time, it was deadline day at the News.

Also, the fate of our nation was hanging in the balance, so there was that.

That anxiety spilled over into the next day and grew. At one point, I had to ask my husband to turn off the news because I couldn’t bear thinking about the election when the results were still a few days away. I stepped away from social media. I needed to think about literally anything else.

Thus, I spent a good portion of that Wednesday being soothed into the rhythms of 18th-century cookery by Jon Townsend. Some of the recipes that Jon shares are difficult to accurately reproduce in the 21st century, but most are incredibly simple. Also, the man uses nutmeg in absolutely everything. The impulse is paid tribute in the name of the structure he built to film his livestream videos: The Nutmeg Tavern.

As I watched videos on and off throughout the day, my husband and child would drift in and out of the room, sometimes joining me. We were all particularly entranced by one video featuring a recipe for “Cheshire pork pie,” a combination of pork, apples and white wine in a pastry crust that seemed both weird and very appealing, even to my usually non-meat-eating family members.

Jon’s joy in cooking is effusive in every video, and he’s apparently never tried anything he didn’t like, up to and including pepper pastilles, a kind of pepper-flavored candy. It’s a joy on par with Bob Ross soaking his brushes in mineral spirits and beating them across the bottom of his easel. Even though colonial cooking isn’t my particular bailiwick — and the history of the time period itself isn’t particularly rosy — it’s hard to look away from a joy like that.

The next day, my husband picked up a grocery order and I was surprised to learn that he’d added a few items to the list: pork loin, apples and white wine. We made the Cheshire pork pie together and tried it and liked it, even discussing ways to change things up when we inevitably made the recipe again. We were all soothed into not thinking about the outcome of the election at a point when we could no longer do anything about it — at least for a while.

Jon must have anticipated that people like me would flock to his channel feeling unmoored and anxious. On Election Day, he posted a video where he sat by a fire making hot chocolate and Scotch collops from the cookbook of Hannah Glasse, a sort of 1700s Julia Child. He reminded viewers to take some time to do something they enjoy, if they’re able, or at the very least step away from the news for a little bit. The video was titled “Everything Is Going to Be Fine.”

I recognize that it’s unlikely that everything will be fine in the world anytime soon. I’m sure Jon does, too.

But when you’re feeling the weight of the work ahead of you (and your country), it can be a saving grace to spare an hour or two for a pork pie, or a vegetable pie or an herb pie or anything you like — if you can.

Or, at the very least, start affectionately calling your child, significant other or random coworker “Pork Pie” — they’ll probably hate it, but it’s funny and it doesn’t cost a dime.

Directions: Pre-heat oven to 375 degrees. Season pork lightly on both sides with salt, pepper and nutmeg. Heat butter in a pan and lightly sear pork on both sides at medium-high heat, just enough to brown the outsides but not totally cook the insides.

At this point, proceed one of two ways: cut your pork into smaller slices and place them into the  bottom pie crust, alternating with layers of apples, sprinkling the apples lightly with brown sugar as you go. Pour 1/4 cup of white wine over the layers, dot the top with butter (about a half stick or more), close the pie with the top crust, cut vent holes and bake for about 45 minutes, until the crust is nice and brown.

Alternatively, after you sear your pork, you can throw in some more butter and cook your apples a little on medium-high heat, just enough to brown them. After removing the apples, pour ½ cup (or more) of white wine in the pan, making sure to stir it around and pick up all the bits of browned butter, seasoning and whatever else is left on the bottom of the pan. Allow it to cook down for a few minutes, then assemble the pie and cook it as directed above.