The map above shows a possible route for the trail, named Mary’s Way after the late Mary Donahoe, who with her husband, Rick, donated land for the trail. Mary’s Way will begin on East Enon Road just south of Yellow Springs High School and travel through wooded areas and around wetlands and farm fields to arrive at Agraria’s historic barn. (Map data courtesy of Community Solutions)

The Village of Yellow Springs is moving forward with plans to purchase three acres of land at Yellow Springs High School for a bike trail to Agraria, Community Solutions’ farm west of the village.

Council voted 4–0 on a resolution at its Nov. 16 regular meeting allowing the Village manager to purchase the school district property — located on the far south end of the high school campus on East Enon Road — for up to $60,000.

Community Solutions recently asked the village to help with its efforts to complete the path by purchasing the property from the school district. The nonprofit is building a one-mile bike path to connect the village with the farm on Dayton-Yellow Springs Road, which hosts school groups and other educational activities.

Under a future agreement with the Village, Community Solutions would pay $30,000 back to the Village over 15 years through annual lease payments. The $60,000 purchase price would come from the Village green space fund, according to the resolution.

Village leaders aired their support for the project at the meeting.

Village Manager Josué Salmerón said the Village already has a bike path along South College Street, and that the Agraria trail would enhance that path.

“This is a great opportunity for the Village to tap in and continue to build out its trails,” he said. 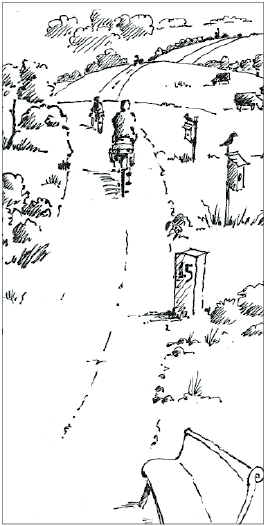 A detail from a rendering by homesteader and local artist Bob Huston shows how a new trail connecting Yellow Springs and Agraria might look. Construction is expected to begin on the one-mile paved trail soon, thanks to a $500,000 grant from the Clean Ohio Trails Fund awarded to Community Solutions. (Detail, Illustration by Bob Huston)

Council Vice President Marianne MacQueen said the greenbelt funding made sense for the purchase, as Agraria is part of the Jacoby watershed and has long been eyed for conservation. After purchasing the 128-acre farm at auction in 2017, the nonprofit placed a conservation easement on 80 acres.

“The greenbelt is not only important as a watershed, but also as a definitive boundary for the village,” she said, adding, “That we can get to Agraria without having to drive a car is just really very cool and important.”

Council member Laura Curliss abstained from the discussion and vote because she has performed legal work for the nonprofit.

Last year, Community Solutions received a $500,000 Clean Ohio grant to help build the path, which is estimated to cost around $800,000. However, the state funds cannot be used to acquire land. Most of the land the path traverses, about 10 acres, was donated to the nonprofit by Rick Donahoe and his late wife, Mary. The path will be named “Mary’s Way” in honor of her.

* The writer is a board member for Community Solutions.

• Council unanimously passed a resolution committing to municipal broadband internet in the village.

Recently, the Village installed fiber lines downtown using coronavirus relief funds in order to provide free WiFi to the downtown area for a year (the WiFi should go live next week). The resolution states that the Village “intends to eventually extend access to the entire community as a public municipal utility with wireless, active ethernet, shared gigabit and other services” for businesses and households in town. The new municipal utility will be operated by Village Public Works.

Council President Brian Housh said the effort goes back to 2014 and that the time to invest in municipal broadband is now.

“I strongly believe this is going to be a critical economic driver for the village and an important investment in our future,” he said.

Salmerón also spoke briefly about privacy, stating that the Village intends not to restrict how data is used and would not sell consumer behavior data.

The amendments increase the number of days for an application to be filed prior to a Planning Commission meeting; clarify how to measure a structure when considering setback requirements; make pocket neighborhood development approvals a two-step process; clarify setbacks from power lines; require demolition permits; and give the zoning administrator more flexibility to allow uses with a similar impact.

MacQueen challenged the requirement that no accessory structures are allowed on the front yard of a property, even if they are less than 144 square feet. No change was being proposed to that provision.

“I just want to state that I am opposed to that,” MacQueen said. “Sometimes people like to have a gazebo, and some houses are set way back. The ability not to have an accessory structure is, actually, ridiculous.”

In response to a question from the News, Village Planning and Zoning Administrator Swinger clarified that chicken coops are among the types of structures that are not allowed on front yards.

• Council briefly discussed its budget process. Council has held three, two-hour budget sessions in recent weeks, and will consider budget legislation at its next meeting on Dec. 7.

Salmerón said he has been asked several questions about the Village’s planned deficit spending, which he clarified at the meeting.

“Council has built up reserves by saving, and now we are going to make investments,” he said. “This is the time we are making investments in infrastructure.”

Salmerón added that, eventually, spending more than revenue will become “unsustainable” and “at that point, we will make some changes so we are not operating at a deficit.”

Housh said he was comfortable with the plan to spend the reserves down to a 90-day supply.

“I feel strongly that we need to invest in our future,” he said. “If we just sit and do nothing, we will just watch our reserves deplete.”

But Curliss said she thought that time-frame was too short.

“It takes a long time to build up reserves,” she added.

Kreeger urged a more conservative approach to spending, especially during an “extreme time of uncertainty.”

MacQueen argued that the Village needs to plan for the depletion of its reserves and not wait until it is spent down at the end of next year. Stokes said he had confidence “that the right type of thinking is being applied” to the budgetary process, and criticized a News headline that the proposed budget was set to “burn through” reserves.

“I didn’t feel like that was the point of our deliberations,” Stokes said.

Housh said he would like the Village to reconsider the issue of paid parking, which he said could bring in an additional $100,000 per year, to which Curliss objected, saying it could hurt businesses.

Village leaders will explain the budget and answer questions after the Virtual Town Hall at 7 p.m. on Wednesday, Dec. 2.

• Village Solicitor Breanne Parcels suggested that Council move forward with legislation to continue meeting remotely. She said the Ohio Legislature may not take up the matter before it expires on Dec. 1. Previously, they passed legislation allowing public bodies to meet remotely through Dec. 1. Parcels’ draft legislation allows for the continuation of remote meetings until the state of emergency related to the pandemic is lifted.

“I think this is the right thing to do,” Kreeger said on the matter. “I gain a lot more energy with the synergy of us being together with the citizens in our community. I regret that the pandemic continues to rage.”