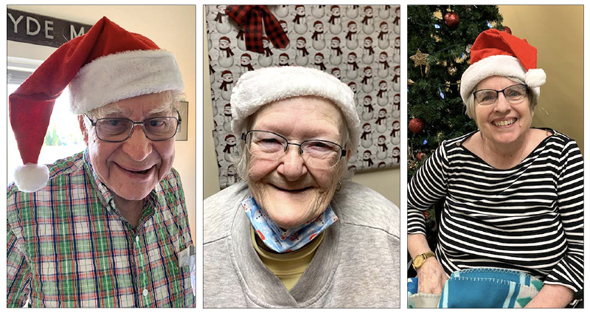 The holidays are festive, if lower-key, at Friends Care Community this year. As one holiday activity, staff recently photographed residents in Santa hats, and the photos, in the form of a video montage, were shared with residents’ families. Visitation has been restricted at the facility since March. Pictured here are, from left, Dr. Carl Hyde, Cheryl Gartner and Judy O’Connor. (Submitted photos)

Decorated trees, holiday music and movies, plentiful cookies and goodies from the community, caroling in the halls, sweet and silly photos in Santa hats.

In many ways, Christmastime at Friends Care Community is as festive as ever, according to Activities Director Todd Sheets — one of the people responsible for making the holidays happen at the local senior living center.

But nine months into the coronavirus pandemic, some cherished elements are missing. Families, friends and volunteers have been unable to enter the facility since March due to COVID-related restrictions. And that means residents’ December social calendar has a bit less bustle and dazzle than usual — no holiday “light rides,” no restaurant trips or senior center potlucks, no community caroling or concerts, no friends-and-family holiday dinner.

“I hate having to miss those things this year,” Sheets said. A 37-year employee of Friends Care, he has been activities director since 2004, and defines his job as “being able to make the residents happy.”

When Sheets spoke by phone with this reporter last Friday, he was making a list — and checking it twice — of all the video calls he was arranging for residents that afternoon. Since the pandemic started, his phone has filled up with contacts in an effort to keep residents electronically connected to their families.

“The next thing on my list is to get out the Santa costume,” he confided.

Sheets is not the real Santa Claus, however. The genuine jolly fellow had to cancel this year because of the pandemic. Santa (aka former villager Detlef Frank) has been making a seasonal appearance at Friends Care for years. He’s only missed one other Christmas, according to Sheets. That was the year Santa had a minor car — er, sleigh — accident on his way to Yellow Springs.

Sheets typically calls Frank over the summer to line him up for December. From that point forward, Santa does what Santa must — he stops shaving.

But this year, Sheets himself — shh — plans to don the Santa suit and hand out gifts. The festivities happen on Dec. 23 for assisted living residents, and Dec. 24 for those in the nursing home. Santa appears on two different days because he’s learned to pace himself, what with the heavy red suit and all.

Gifts this year have been provided by a community member, and include such items as blankets and warm socks. And Friends Care nurses came up with the idea of doing stockings for residents, with small gifts under $10 purchased by employees.

“Those names have been filling up really quick,” Sheets said.

Light-hearted holiday celebrations come at the end of a profoundly challenging year for Friends Care and other senior living centers in Ohio and nationwide. Older adults are especially vulnerable to serious illness and death from COVID-19, and congregate living settings intensify the risk of contracting and spreading the infection.

So far, Friends Care has largely succeeded in keeping the virus out of its assisted living, nursing and independent living facilities, home to a total of 96 residents. Just two employees, both dietary workers, tested positive for the illness, out of 91 total staff. No other staff employees — and no residents — have come down with the illness since the pandemic started in March. Staff have been tested twice weekly for months, while residents are tested based on symptoms and circumstance.

Only two other long-term care centers in Greene County, out of 19 in total, have a comparable record, according to state data. And several facilities in the county have seen dozens of cases among residents and staff, as well as some deaths.

Overall in Ohio, about 10% of the state’s total COVID-19 cases have involved long-term care centers, and at least 50% of deaths from the virus have occurred in these facilities.

Friends Care has been very lucky, and very careful, according to one assisted living resident, Carl Hyde, a retired physician and longtime villager who turns 93 on Dec. 30.

That caution has meant that Hyde hasn’t been able to do some things he ordinarily would. For example, he recently passed up attending an annual medical conference in Springfield with his son, David Hyde, also a local doctor. As much as he enjoys the professional gathering, he decided it wasn’t worth the two-week quarantine he would face after a few hours away from Friends Care.

“It’s difficult,” he said of missed opportunities for social and intellectual engagement.

Employees, too, have been curtailing their activities for months to protect residents from the virus, according to Sheets. Staff feel keenly their responsibility to avoid social situations that could expose them to the virus and lead them to inadvertently infect residents in their care, he explained.

“For employees, the hardest thing is not wanting to get the virus and bring it in. Most of us don’t do anything outside of work,” Sheets said. He misses his friends, but caring for residents takes precedence.

“These people are family,” he explained. “That’s why we’re so careful — we care for them, and we love them.”

Such care also means that staff work hard to make up for the loss of family contact residents have experienced during the pandemic, according to social worker Bethany Miller, director of social services at Friends Care.

“My heart hurts for them,” she said. “We’re trying to do our best to be there for residents and help them connect with their families.”

Ohio ordered nursing homes closed to visitors on March 13 at the start of the pandemic in an effort to protect those most vulnerable to the virus. Nine months later, many facilities continue to limit visitors. According to recent data from the state’s visitation dashboard, 45% of Ohio’s 1,373 long-term care facilities allow indoor visitation; 39% allow outdoor visitation; 72% allow window visitation; and 14% do not allow any visitation.

Friends Care allows window visits — during the holiday, some families have been singing carols together through the glass — but has not permitted indoor or outdoor visits since March. That seemed about to change in October, when the facility rolled out new protocols for indoor visitation and began scheduling visits. Administrators quickly halted the process when an outside hospice worker tested positive for the virus, and the pandemic worsened in Greene County.

Villager Jenny Cowperthwaite Ruka was on the list to visit her 95-year-old mother, Ruth Cowperthwaite, but was nervous about how Ruth would react to a physically distanced visit with gloves and a mask. When indoor visitation plans were suspended, she felt a measure of relief.

Instead, she visits her mom most days at her nursing room window. She fills her birdfeeder, and mother and daughter wave and blow kisses. Phone calls are too difficult to navigate, due to Ruth’s dementia, so visual contact through the window is their primary link.

“That’s all I can do,” Cowperthwaite Ruka said.

Christmas Day will be no different. While Cowperthwaite Ruka in past years has brought a special meal to share with her mom, this year the visit will be brief and through the glass. It’s a low-key Christmas compared to the tradition-rich family celebrations that Cowperthwaite Ruka treasures from her youth.

“Christmas was always really special, but it’s in the past. And that’s OK,” she said.

Assisted living resident Carl Hyde spoke nearly those same words in reflecting on his own modest plans this Christmas.

Hyde won’t be dining out with his family this year, and he’s let go of other rituals. In past years, he’s sent out a Christmas letter to friends. But he lacked the energy for that annual mailing this year — “I can’t imagine why,” he added, chuckling over his soon-to-be 93 years.

As he has in recent years, he’ll be purchasing four Glen Helen calendars — “they always have an interesting calendar,” he noted — for his three children and himself. That will be the main gift he’ll give. He also looks forward to a Sunday window visit from several members of Yellow Springs Friends Meeting who have been sharing silent worship with him for months.

“They come with their folding chairs and sit six feet apart. They’re very faithful,” he said.

Looking ahead to the new year, Hyde has his hopes pinned on the new vaccine. Residents and staff of long-term care facilities, together with high-risk healthcare workers, have been prioritized in the state’s vaccination rollout plans.

That rollout began last week. As of Monday, Dec. 21, 6,733 people in Ohio, mostly healthcare workers, had received a dose of the vaccine, with 41 being inoculated in Greene County, according to a new state vaccination dashboard. Vaccination at Friends Care is being coordinated by CVS and is tentatively scheduled to begin on Dec. 28, according to Executive Director Mike Montgomery. And Gov. Mike DeWine has said he expects all of the state’s nursing homes and assisted living facilities to receive the vaccination by mid-January 2021.

Meanwhile, Friends Care staff and some residents remain aware of the need to protect each other during a still-dangerous phase of the pandemic.

Nursing home resident Carole Carter, a Jamestown native who moved into Friends Care last March, said she would miss going to her daughter’s house for Christmas this year. But her family has been visiting at the window, and when she spoke with this reporter, she had just been singing carols with staff. Bingo, religious visits, movies and cookies are also making the holiday sweet for Carter.

In the spirit of the season, she seemed to have made peace with all the changes and restrictions the pandemic had brought.

“We’ve got to look out for each other,” she said.