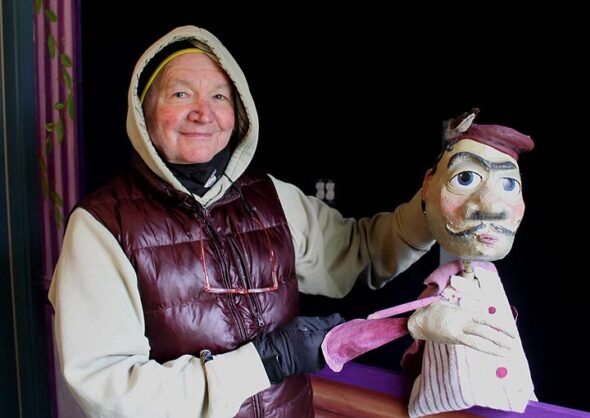 The world of theater has many forms, and puppetry is among its oldest and most captivating. The first puppeteer took the stage sometime in the fifth century B.C., and since then the art form has expanded immensely. There are finger puppets, hand puppets, sock puppets, shadow puppets, muppet puppets, marionettes and more.

As winter turns to spring in 2021, the Yellow Springs area will be introduced to a new kind of puppet: the traveling puppet.

The Traveling Tabletop Theater, or TTT, is a mobile puppet theater complete with a stage, a sound system and even seating for a few dozen spectators, which will be touring the streets of Yellow Springs later this year. The organization behind this operation is the YS Kids Playhouse, or YSKP, and specifically John Fleming, its founder and longtime artistic director.

“I think the TTT is a major evolution for the YSKP,” Fleming wrote in an email.

Even before the COVID-19 pandemic hit, YSKP was looking for new avenues after losing its longtime home at the Antioch College amphitheater (which is not being rented out due to visible issues wtih the structure). Now its home is on wheels.

“The Traveling Tabletop Theater is the new home of the YSKP. It will travel to other places and become a seasonal memory for youth that are living and growing up there,” Fleming explained.

Fleming founded  YSKP in 1995. A nonprofit, YSKP has focused on providing opportunities for children and young adults in the world of theater, featuring more than 1,200 participants in its productions over the years. After retiring as YSKP executive director in 2014, Fleming later returned in 2019 to direct the company’s 25th anniversary show, “Bonanza Valley!”

According to Fleming, the TTT is an attempt to take the YSKP in a new direction, expand its horizons and reach new audiences. 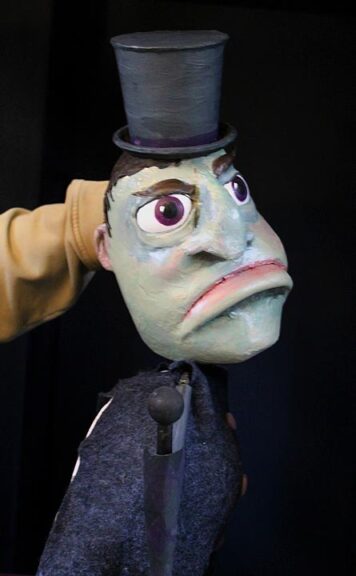 “When we get rolling, the puppet workshops will enable the YSKP to include, and impact, youth across the Miami Valley region,” he noted.

When asked about his reasons for wanting to specifically create puppet theater, Fleming highlighted the simplicity of the art form in contrast to today’s hyperactive, sensory-overload world.

“I feel like this is an interesting moment in our culture, because of the prolificacy of social media and because there’s so much information input,” Fleming said.

Puppets, meanwhile, can only portray one emotion at a time, he said.

Especially for children, puppet theater provides a chance to slow things down and process one idea at a time in a safe place, he said. YSKP, Fleming said, hopes to “simplify the game somewhat, by creating theater that is told in a more simple, yet provocative way.”

Fleming also feels that puppetry is slowly becoming more popular in today’s world. Puppetry workshops and productions are beginning to pop up all over — if you know where to look — and he is hoping to bring some of that into the Yellow Springs area.

“It’s a response to present-day cultural interest in puppetry and animated objects both as a form of artistic expression and a tool of commerce and mass entertainment,” Fleming said of the TTT.

The opening performance for the TTT will be “The King Stag,” a fairy-tale play originally written in Italy in the late 1700s in the commedia dell’arte style.  “The King Stag” is a magical story about the mystical land of Serendippo and its colorful cast, which features wizards and royalty. Per the official promotional page for the production, the story is centered around “the wish of King Deramo to find a loving candidate to be his queen.” The story features comedy, drama and romance, and “love that emerges triumphant in this riveting and hilarious comic fantasy,” according to the website.

Fleming said he decided on this story for the TTT’s debut performance because he has directed a production of it in the past and he feels that it will translate well into the puppet format of the theater.

“I selected ‘The King Stag’ because it is a magical fairy tale that is funny and, in my view, is perfect for a story told by puppets,” he noted.

“The King Stag” production, featuring around seven cast members, is just a starting point for the puppet immersion that can be experienced with the TTT. Besides the play, Fleming also plans to hold workshops for making and playing with puppets before the shows as an opportunity to get more people involved.

The TTT includes a limited number of seats inside the trailer. To accommodate more people seated outside, an outdoor screen will simultaneously broadcast the show as it’s being performed inside.

Fleming credited village resident Bob Swaney with coming up with the initial idea for the TTT. Swaney had worked on miniature mobile builds before and wanted to get his hands dirty. He thought that perhaps Fleming could have a use for something small and mobile, so Swaney called him up, and five minutes later the idea that would become the TTT was born. 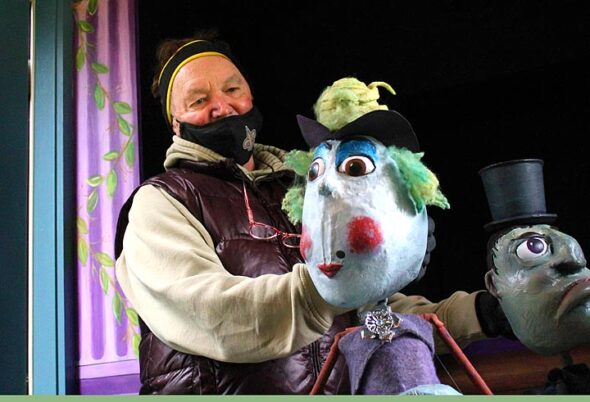 Once the build was underway, it was just a matter of time and a matter of funding. Luckily, Fleming said, there was a generous surge of public support for the project and soon enough, blueprints turned into reality.

Thanks to Swaney and his wife, Sue, who took care of the paintings on the stage; and Tristan Cupp and Elisabeth Simon, who created the whimsical puppets, things seemed to be smooth sailing for Fleming and his team as they built momentum toward the traveling theater’s debut, with sights set on the spring of 2020.  About half of the $40,000 needed to get the traveling theater off the ground was raised.

Then, COVID-19 came and shut down most live performing arts.

“The major abiding challenge, still with us of course, is the pandemic,” Fleming said.

Not one to be easily deterred, Fleming recalibrated, aiming for the spring of 2021, and continued working.

The pandemic has forced businesses to get creative with accommodating people in a safe manner, and the TTT is no exception. If social distancing is still a necessity this spring, viewing the show from inside the trailer might not be an option. As such, Fleming’s team put together a puppet tent that can be used for performing just about anywhere, while allowing the audience to watch the show in a safer environment. Fleming said YSKP is doing whatever it can to maintain the spirit of inclusion and the joy of storytelling that has always been a part of the organization.

Looking past opening night, Fleming said he is most excited about the chance of going back to a town for a performance and seeing the children gathering around in excitement that the Traveling Tabletop Theater has returned to their area. Fleming himself spent time as part of a traveling theater.

“We’d travel by boat up and down the Mississippi,” he said, “and there was always a lot of excitement around a return show.”

Fleming said he’s always strived to bring smiles to faces and give people experiences that will stay with them long after, and the Traveling Tabletop Theater is another creative avenue for achieving that goal.

“I’m really looking forward to getting out there to get this thing rolling — literally!” he said.

Soon, the Traveling Tabletop Theater will hit the road with its production of “The King Stag,” aiming to give people a chance to slow down, enjoy a well-told story with love, morality, magic — and wheels.

* The reporter is a freelance writer based in Springfield.