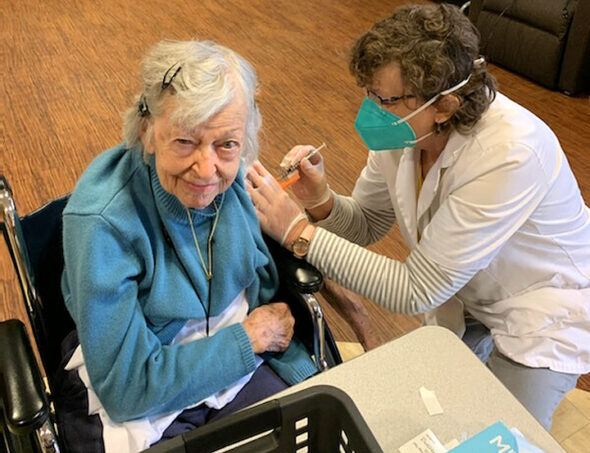 Friends Care resident Marilynn Birch, 99, was vaccinated at the center on Jan. 8. A total of 60 of 70 residents and more than half of the staff received their first dose that day. (Submitted photos)

UPDATE: On Jan. 14, the Ohio Department of Health launched a new website to search for vaccine administration locations. Visit: vaccine.coronavirus.ohio.gov/.
• For a list of Greene County vaccination sites, click here.

It was the day they’d been waiting for.

Ohio Gov. Mike DeWine has announced tentative dates when the next group of Ohioans would be eligible to receive a COVID-19 vaccine.

More information on how to receive the vaccine will be released later this week. Visit http://www.gcph.info for details.

On Friday, Jan. 8, Friends Care Community celebrated the arrival of pharmacy staff from CVS, there to administer the first round of COVID-19 vaccines.

The local elder care facility has been eager to vaccinate its residents and staff — especially after its first two scheduled vaccination dates in late December were canceled. The facility has yet to record a single resident case, and wants to keep it that way. 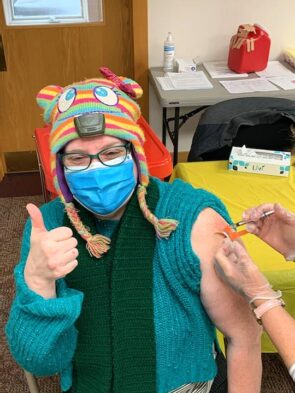 That day 60 of Friends Care’s 70 residents received their first dose of the vaccine, including 13 of 15 assisted living residents and 47 of 55 nursing home residents, according to Friends Care Director Mike Montgomery this week. Several of those who did not take the first dose will do so at the next visit, while a few others declined because they don’t take vaccines of any kind, Montgomery added.

As for staff, 50 out of 95 received their first vaccine dose, or 53%. While Montgomery said he was “not crazy about the percentage,” he noted it is better than the national nursing home staff average of around 50%.

“I am very optimistic that this will improve since a lot of staff members said that they will be taking the vaccine the next time it is being offered,” he added.

In addition, some staff members were scheduled for subsequent rounds, in case adverse reactions kept them from work, he noted.

“Fortunately, we had no adverse reactions, therefore more staff members will be likely to take the vaccine the next time it is offered,” Montgomery reported.

The next vaccination clinics are set for Jan. 29 and Feb. 19. Two doses of the vaccine, about 21–28 days apart, are needed for it to be the most effective.

So far, the COVID-19 vaccine rollout has been slow in the state, but soon more Ohioans will be eligible to receive them.

After starting with front-line healthcare workers, EMS first responders and long-term care facility residents, a group identified as Tier 1A, the state is moving on to provide vaccines to the next three groups: older people, those with developmental delays or congenital diseases and school teachers and staff — Tier 1B. 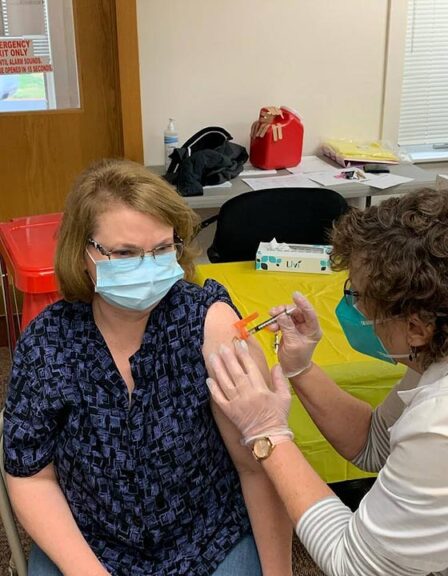 “We will start with our most vulnerable, where we have seen the most tragedy,” DeWine said of his decision to prioritize older Ohioans.

The median age of death from COVID-19 in the state is 81, and those over 70 have accounted for 79% of the state’s 9,802 deaths, according to figures from Jan. 12. About half of all deaths in Ohio have been in long-term care facilities.

DeWine said that the state should be done with the first round of vaccines for those in Tier 1A next week, and he wanted to set aside a week for those who are older than 80, which includes an estimated 420,000 Ohioans. In total, Tier 1B includes 2.2 million people.

Commenting on the slow rollout, DeWine said the state has been limited by supplies, but that situation should improve over the next few weeks. The problem, he added, is “not unique to Ohio.”

“We are working hard to get the vaccines in people’s arms as quickly as we can,” DeWine said.

The state expects 100,000 new vaccine doses each week, and, along with doses the state has set aside in reserve, DeWine believes the demand can be met. However, not everyone in a tier will be vaccinated right away.

“What will drive this is the scarcity of the vaccine,” DeWine said. 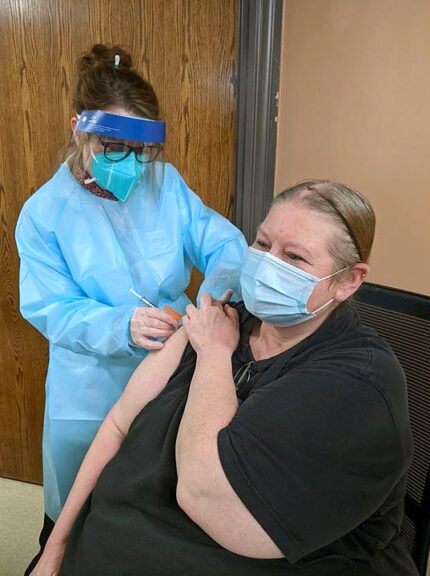 As of Tuesday, Jan. 12, 321,506 people had started their vaccinations in Ohio, 2.75% of the state’s population, slightly below the national average. According to the Bloomberg vaccine tracker, Ohio has used about 40% of its 751,250 vaccine doses.

Those eligible will be vaccinated by physicians, local health departments, hospitals, federally qualified health centers, in-home health providers and some retail pharmacies, according to DeWine. More information and how to be vaccinated will be shared by county-level emergency management agencies later this week.

Greene County Public Health Communications Director Laurie Fox said that the health department will provide more details in a press release set for Wednesday, Jan. 13, or Thursday, Jan. 14. On Thursday, the Ohio Department of Health will post details on coronavirus.ohio.gov about providers, searchable by ZIP code.

“Plans and information are still coming into our office from the state,” Fox wrote in an email on Monday.

In the county, 4,434 people have been vaccinated so far, or 2.62% of the population, according to state data.

Following a post-holiday surge, COVID-19 case increases have slowed over the past week in the state and county. But the 45387 area code is seeing more new cases than ever before.

The seven-day moving averages of new daily cases in Ohio and Greene County reached their highest levels in mid-December before plunging over a two-week period. Case counts have risen for 12 straight days since the start of the new year, but the rate of increase is slower than last month.

On Jan. 12, 2,194 Greene County residents were ill with COVID-19, about the same amount as at the start of December, and down from the peak of around 2,500 mid-month. Greene County continues to be designated a “red” county, along with 84 of Ohio’s 88 counties, indicating high incidence of the disease.

Looking closer at the 45387 area code, the Yellow Springs area is still faring better than neighboring communities while adding more cases than ever. Since the start of the year, an average of 3.25 people each day have been added to the list of confirmed and suspected COVID-19 cases here, up from an average of closer to two through the month of December.

Ohio’s curfew remains in effect through Saturday, Jan. 23. The curfew extends from 10 p.m. to 5 a.m.

2 Responses to “COVID-19 update— Older residents next for vaccination”