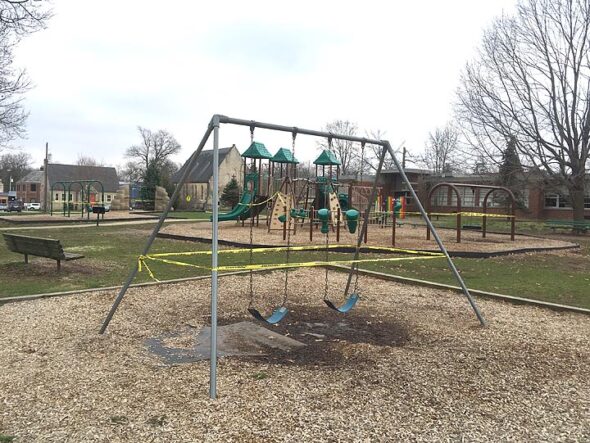 Gov. Mike DeWine’s push to get all of Ohio’s K–12 students back in the classroom by March 1, at least part time, is driven partially by concerns about the mental health toll that ongoing remote learning may have on young people.

Describing the return as an “urgent necessity” during his latest press briefing Tuesday, Feb. 9, DeWine said the “pandemic has been disruptive” for all children in the state. “Just as adults have felt the strain of this pandemic so certainly have our children,” he said.

The effect on students is not only academic, but also social and emotional.

In confirmation of that strain, local data shows that an increased number of young people are struggling, and mental health care providers report that the severity of struggle is more pronounced amid the COVID-19 pandemic. However, the connection of the distress to remote learning is up for debate. This week, as Yellow Springs students prepare for the March 1 return, the News looks at arguments on both sides.

The nature of student struggles

According to Greta Mayer, director of the Mental Health & Recovery Board of Clark, Greene and Madison Counties, care providers in Greene County report a 7.8% increase in mental health cases among area youth over the past seven months compared to the same period the year before.

That increase has not been seen by the county’s in-school therapists, but those same therapists report that students who already have mental health conditions are experiencing more serious symptoms, according to Anya Senetra, the Greene County Educational Service Center’s school-based mental health program supervisor.

Senetra didn’t have specific numbers available within the county’s schools, but according to Mayer, the schools’ licensed therapists are reporting an increase among students already receiving mental health services in the number of referrals to Dayton Children’s Hospital for suicidal ideation with an accompanying access to lethal means.

The Yellow Springs school district, which has been fully remote all year, hasn’t experienced an uptick in requests for mental health services, according to district leaders, but anecdotal stories from parents and students tell them that children are struggling with the ongoing separation from their peers, teachers and other caring adults outside their own families.

“We have had parents asking for more opportunities” for their children to connect with others, Michelle Person, the principal at Mills Lawn Elementary, said in a recent phone call. Those requests, as well as the need by some students for more academic support, led the district beginning in November to bring a limited number of students into the schools on Wednesdays for tutoring, counseling and small group activities.

The district’s computer servers also have a program that flags the principals and school counselors whenever a student conducts an online search containing words related to depression, suicide, drugs or X-rated content.

Person said she gets four to five notifications a day, “85-90% of which are sixth-grade boys looking for boobs,” she said.

The messages that indicate the possible need for a mental health-related intervention have been along the lines of “Why do I feel so sad?” or “How do I know I’m depressed?”

She said that whenever such a question, or any mental health-related statement, comes in, either she our school counselor John Gudgel gives the child’s family a call to alert them of the situation and “let them know that Mr. Gudgel is available for a one-on-one appointment,” if they choose.

A specific stressor — the death of a grandparent, an argument with a parent — often prompts a student’s online search, Person said, but general feelings of distress also come up.

“I think that most of our students want to come back to school,” she said.

According to Jack Hatert, the principal at McKinney Middle School and Yellow Springs High School, although distance-learning has been difficult for many students, some are thriving in a remote environment, especially youths who find the school setting to be a challenge.

His main concern is for students who find desired peer contact through school attendance and don’t naturally reach out on their own behalf.

Mayer, of the area Mental Health & Recovery Board, or MHRB, agreed that some students are relieved to stay home. While there has been an increase in anxiety and depression among young people over the course of the pandemic, the incidents of violent behaviors, “acting out,” has decreased, she said. She speculated that the decrease is related to young people who struggle with the in-school environment being able to pursue alternative settings.

The majority of students, however, are negatively affected by the isolation of extended online learning, Mayer said. 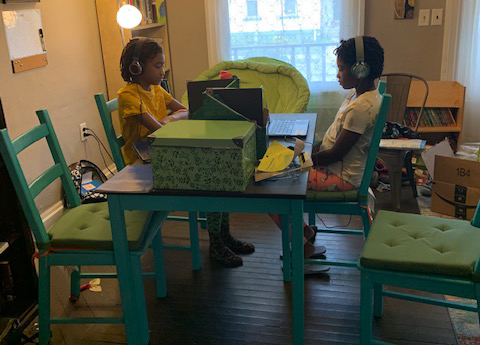 Back in October, fourth grader Jacy Jones, left, and sixth grader Kali Jones shared a work area in their home designated for logging into their online classes at Mills Lawn Elementary School. According to their mother, Gina Jones, the girls, and their older sister Evie, a seventh grader who signs into McKinney Middle School classes from her room, approach remote learning much like having a job. (Submitted Photo)

“What they miss is an interaction with peers,” she said. “It’s a normal part of development.”

But the anxiety and depression that some students may be experiencing isn’t necessarily related to whether they’re in or out of school, Mayer said.

All of the consequences of the pandemic — financial instability within families, worries about illness and death, the loss of loved ones to the disease — deeply affect a child’s emotional well-being.

For some families, their children’s return to in-person classes raises more anxiety about safety.

Meagan Fitzpatrick, a Yale-trained epidemiologist based in Maryland, believes that schools should not reopen until all teachers have been fully vaccinated.

As is the case here, her home school district is set to return to in-person instruction on March 1, with teachers having at best received only the first of the two required vaccination shots. Fitzpatrick has decided to keep her own 6-year-old son at home.

“Moving to in-person instruction without regard to the timeline for rollout [of the vaccine] fails the very people who have given our children so much this year,” she wrote in a recent message shared on social media.

She notes that while evidence suggests that opening schools is not the primary cause for community cases, COVID transmission in schools does occur and poses a health risk for everyone in the school environment.

Citing a recent study in which participating schools followed strong mitigation protocols — masks, distancing and weekly testing — she wrote researchers found that for every two infected people in the school, there was one additional downstream infection. And that was with routine testing, which most school districts do not do.

“Transmission does happen, and will happen,” she wrote. And without testing resources, transmission in the schools will “likely become a closer mirror of the community incidence.”

Fitzpatrick’s concerns are not matched by the Centers for Disease Control, which published a study last month finding little evidence of the virus spreading at schools that adopt recommended precautions.

Fears about the mental health of students engaged in remote learning escalated nationally following a recent New York Times article reporting on a drastic increase in the number of adolescents dying by suicide in the Las Vegas area. School leaders, and the article, attributed 18 deaths within a two-month period to the extended school closure there.

But at least one mental health professional finds the correlation an oversimplification of the circumstances that may lead to suicide.

Noting that there has not yet been “any meaningful research” regarding school closures and adolescent mental health, Courtney Balacco, based in Franklin, Mass., recently wrote that suicide “is complex” and not generally related to a single cause.

She also pointed out that the suicide rate among adolescents has been increasing for more than 10 years.

In addition, “much research has been done which shows that this rate spikes when school open, and drops when they close,” she wrote, adding that “adolescents consistently report in public health research that school is one of their largest stressors contributing to their mental health.”

New research also is finding a connection between contracting COVID and a subsequent development of mental health issues, including depression, anxiety and psychosis. Research has indicated that upwards of 20% of COVID patients developed a diagnosable mental health disorder within three months of having the disease.

All research, however, is early, and much work is yet to be done.

According to data released in October by Mental Health America, the general public saw a 634% increase in anxiety between January and September 2020, and an 873% increase in depression over the same time period. The numbers for children were not listed separately.

Mayer, of the regional MHRB, said that the anxiety and depression among adults has a definite impact on the children in their lives. Family life has been “destabilized,” and children are experiencing a variety of losses and related grief, she said.

The loss of important milestones related to school is no small matter, she added. Children grieve the absence of anticipated moments and experiences.

Offering a reminder that we all are living through a time of trauma, Mayer said mental health support is a available for children and adults through a variety of programs and services.

Among other services, MHRB maintains a COVID CareLine at (800) 720-9616. For more information about the agency’s programs, go online to mhrb.org.

Another mental health resource is the National Alliance for the Mentally Ill, or NAMI: http://www.namicgm.org.