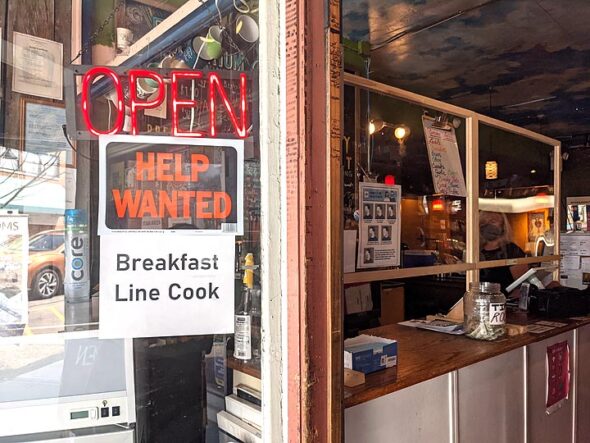 "A sign at the Emporium. Owner Kurt Miyazaki hopes to reopen the dining room in mid-May, after staff members are fully vaccinated." [Editor's note: the help wanted sign has been taken down since the time of publication.] ("Photo by Lauren “Chuck” Shows)

After more than a year of temporarily shuttered buildings, virtual-only programming and uncertain futures due to the pandemic, villagers may see a few more “open” signs downtown over the coming weeks — although some doors will remain closed for the time being.

“We’ve all sort of metabolized the weirdness that this virus has brought, [but] it feels like everybody’s ready for things to get back to normal,” said Christine Monroe-Beard, co-owner and operator of Ye Olde Trail Tavern and Peach’s Grill. The Tavern opened last week, and Peach’s opened this Monday, after being closed since the fall of last year. So robust was the Tavern’s business during its opening week that, after closing briefly in order to have insulation installed, the restaurant closed for an additional day in order to restock its kitchen.

“[Customers] pretty much came and ate like locusts — we ran out of everything,” Monroe-Beard said.

Both restaurants had reopened last summer for outdoor dining, but closed in the fall after an employee tested positive for COVID-19. Monroe-Beard said she and her husband, co-owner Don Beard, had originally planned to reopen after the two-week quarantine period, but ultimately decided to remain closed.

“At the time, there was still the enhanced unemployment funding and we have staff with compromised immune systems, and we thought, ‘What if this happens again?’” Monroe-Beard said. “We just really didn’t want to take that risk.”

Now, however, with around 20% of Greene County’s residents fully vaccinated, according to the latest data from the Ohio Department of Health — a hair ahead of the state percentage of around 19% — and masking and sanitization measures still mandated at the state level, Monroe-Beard said she’s feeling optimistic moving forward.

“Don and I have both had our first and second shots, and most of our managers have had at least the first dose, so everyone on the staff is feeling a little more comfortable,” she said.

Across the street from the Tavern, the Emporium’s Underdog Cafe has reopened for outside seating, but is eyeing mid-May for the reopening of its dining room, otherwise known as “Yellow Springs’ living room.”

According to owner Kurt Miyazaki, the Emporium’s youngest staff members only recently became eligible to receive the vaccine. They’re all scheduled to receive the Moderna vaccine — which has the longest recommended waiting period between first and second doses of all the available vaccines at 28 days — putting the entire staff on track to be fully vaccinated by the second week of May, after which the cafe will reopen for indoor service.

A few doors down from the Emporium, another set of doors is poised to remain closed for the time being. The Little Art Theatre Board wrote in a press release this week that, given the small size of the theater, and with “safety and prudence” as its highest priority, it does “not anticipate opening in the immediate future.”

The Little Art Theatre closed in March 2020 with the rest of the nation’s theaters, but reopened in July with reduced capacity in order to maintain physical distancing for patrons. After nearly two months of operation, however, the board made the decision to close the theater again, citing low attendance as the primary reason for the second closure.

During its closure, the Little Art underwent another big change: according to the press release, at the end of 2020, Jenny Cowperthwaite Ruka stepped down from her role as the executive director “after four decades of devoted service to the Little Art Theatre.”

“The Little Art made for a wonderful 42-year career,” wrote Cowperthwaite Ruka in a statement to the News this week. “While navigating through five of its major transitions, along with many other changes over the course of four decades, it will forever remain very important and dear to me.”

She continued: “I wish the best for [the theater’s] future and I look forward to its reopening. See you at the movies!”

The Little Art board wrote that Cowperthwaite’s years of work and leadership have “positioned the Little Art to thrive,” adding that the theater is “currently focused on finding the best possible candidate to guide the Little Art” as the board makes plans for its eventual reopening.

The board also thanked patrons and donors for their continued support during the theater’s closure, and added that it hopes to plan some outdoor and online events this summer, reminding moviegoers to “watch the marquee” for updates.

While the theater remains closed, the YS Senior Center is opening soon for in-person events. Its first such event in more than a year will be Monday, April 12, at 6:30 p.m., when Ryan Beach of Edward Jones will present a session in the Senior Center’s ongoing financial talks series.

Senior Center Executive Director Karen Wolford wrote in a recent email that, despite the ODH-reported percentage of Greene County seniors who have been fully vaccinated — around 64% of those 65 and older have received both doses — the vaccine rollout hasn’t affected center leadership’s decision to reopen. The center was originally slated to reopen for in-person events in October of 2020 after Gov. Mike DeWine lifted restrictions on senior centers and adult day center services. With the vaccine still months away at the time, the center had aimed to implement masking, advance registration, physical distancing, capacity restrictions and temperature screenings for its in-person events, but reopening was halted after the county was elevated to level 3, or “red,” by the Ohio Public Health Advisory System.

Wolford said all of the precautions the Senior Center had intended to undertake last fall will be implemented for all of its in-person programming for the time being, and added that the majority of the center’s programming will remain online via Zoom.

“Many class leaders are more comfortable right now having classes online,” she said. “As the months go on, we will continue to unfold our operations.”

As the weather grows warmer, some institutions are easing into opening again by holding meetings and events outside. The YS Dharma Center on Livermore Street plans to hold meditation practice outdoors in its garden beginning in May; exact dates and times will be available at ysdharma.org in the coming weeks. The center will also continue to offer morning meditations on Tuesdays and Thursdays and Compassion Practice on the second and fourth Fridays of the month via Zoom. Dharma Center instructor Dianeah Wanicek said the center is planning to keep its eye on case numbers and the vaccine rollout over the coming months with the aim of reopening the building to visitors.

“In early summer we may be able to move some meditation sessions indoors at the center, depending on the CDC guidelines,” she said.

Likewise, some places of worship are gearing up to meet outside. The YS Friends Meeting, which has been meeting via Zoom, will talk this Sunday about a plan to meet outside Rockford Chapel on the Antioch College campus under a canopy, Meeting Clerk Bruce Heckman said this week — though he added that a precise date hasn’t yet been set.

“I think ‘sometime very soon’ is the most concrete we can be at this point,” Heckman said.

Annie Blanchard, of the Meeting’s Communications Committee, added that the Meeting is also exploring the possibility of blending virtual and in-person meetings, both for those who don’t yet feel ready to attend in person and for those who have had the advantage of attending meetings from afar via Zoom.

“The vaccine has brought much relief, but we are aware that it doesn’t necessarily mean it’s safe to gather inside yet,” Blanchard said. “If we do feel led to go inside soon, it will be with the windows open, masks on, socially distanced and possibly using more than just the chapel for worship.”

The YS Havurah, which has shared Rockford Chapel with the Friends Meeting for years, is also considering moving its services outdoors. Though the Havurah continues to meet remotely at the moment, Len Kramer said congregants will consider holding services outside in members’ backyards, much as they did last year during good weather. He added that, because the Havurah rents space at Rockford Chapel from the Friends Meeting, the Havurah won’t consider indoor services until the Friends do — and even then, they may decide not to move indoors.

“As an older congregation, the vaccine is an important consideration,” Kramer said. “Once all our regularly attending members are completely vaccinated, we will review the data available on [in-person] gatherings and consider what to do.”

“We must do our best to protect and offer equal opportunity for worship for every member of our church community,” she said.

She added that, with the vaccine roll-out and the approach of warmer weather, the church has discussed meeting outdoors for in-person worship, and even the possibility of meeting indoors “before too long.”

For that reason, Schaffnit said, First Presbyterian Church will continue its current course with online worship for now, while looking forward to a time when the congregation can meet in person without excluding any members of the congregation.

“When that time comes, worship may look — and sound — quite different, as we will be making changes to help contain the spread of the virus, but it will be worship filled with gratitude and joy,” she said.

As more village businesses and institutions launch reopening plans, the News will continue to announce those plans to readers in upcoming issues.